As some of you know, I played a bunch of DBA several years ago; and now I'm finally transitioning to Triumph!

We've been playing a lot of Classic games recently: Alexander, LA Persians, Later Hoplites, and Thracians. The rule book is excellent, so I only have one situation that I am not sure we're handling correctly. (Note to the future: we're using the Triumph v1.0 rules here.)

In the first image, a line of Heavy Foot contacted two ranks of Pike, and a Skirmisher on the right flank has closed the door in the old-school way.

Here's my excruciatingly detailed interpretation of what happens, according to our interpretation of the rules:
- The HF is in front contact with the pike (17.1) and the Sk is in flank contact with both ranks of pike (17.3).
- The Pk in the first rank is fighting to its front (64.1) and its flank (64.2)
- The Pk in the first rank and the HF must fight each other (64.3)
- The combat factors before rolling are Pk: 2 (+3 vs foot, no rear support because of flank contact, -1 for flank contact) vs HF: 4 (+4 vs foot)
- If the Pk in the first rank loses the combat but is not doubled, it is destroyed when it attempts to fall back, because it has flank contact (79.2a)
- The Pk in the second rank is fighting to its flank against the Sk (64.2)
- The question: This close combat can still happen, even though the Sk has already provided a flank contact penalty to the other Pk and may have caused it to be destroyed when it fell back?
- That combat is Pk: 2 (+3 vs foot, -1 for flank contact) vs. Sk: 2 (+2 vs foot)
- If the Pk loses but is not doubled, it conforms by pivoting and falls back, because there is room to do so (65.4).

Are all of these correct? As noted, the only part we aren't sure of is whether the Skirmisher gets to fight as well as providing all of its other benefits. I haven't found any rules suggesting this combat won't happen, but it seems really powerful so I wanted to be sure. 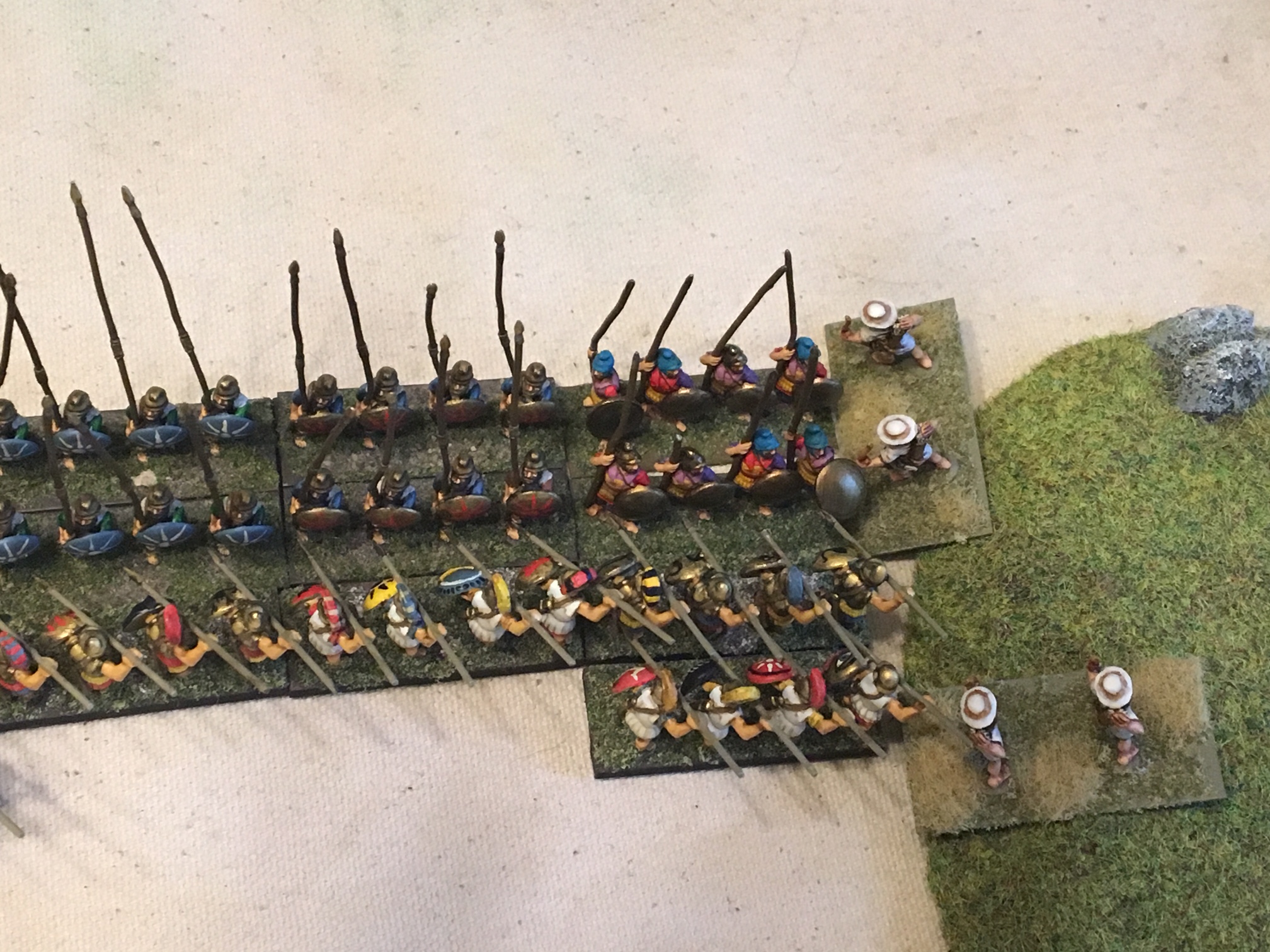 When we rolled the combat, the HF doubled the first rank of Pk. This destroys the Pk, and the HF must follow up because it doubled the enemy.

As seen in the second image, this leaves the HF in front contact with the 2nd rank of Pk, and the Sk is still in flank contact with that Pk. This seems to change the situation: while before the Pk was able to fight the Sk to its side because it had no front contact, now the frontal combat takes precedence; but the HF has already fought, so no further combat happens this turn. Is that correct?

If that's the case, the choice here seems to be between:
- Fight HF vs Pk1 first, risking doubling them and not being able to fight the second combat
- Fight Sk vs. Pk2 first, risking falling back and losing the flank contact on Pk1

Thanks for the clarification! I'm sorry for the verbosity, but it feels so good to have a modern rulebook with specific paragraphs to refer to, I just couldn't help myself. 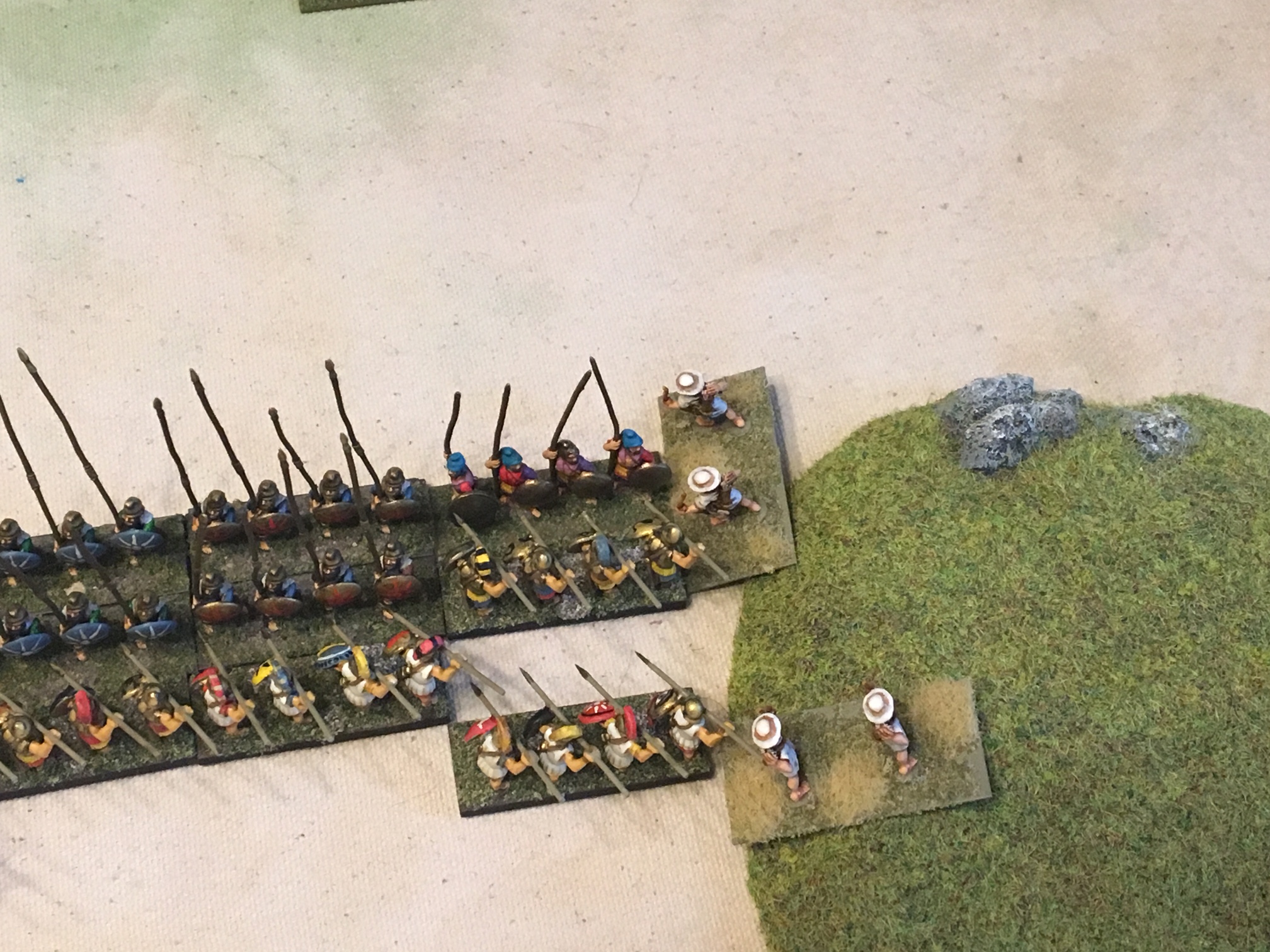 
The final outcome of this battle between my son's Alexandrian Macedonians and my Later Hoplite Thebans was that my son destroyed me in only 3 rounds of combat, killing my general and winning 21-7.

Alan,
If I understood your details correctly, yes I would say you got is all right.


- The question: This close combat can still happen, even though the Sk has already provided a flank contact penalty to the other Pk and may have caused it to be destroyed when it fell back?

Yes, keep in mind the player whose bound decides the order of the combat, so the skirmisher could have tried to fight the rear rank first, however if he lost he would have fallen back before the heavy foot fought.


HF has already fought, so no further combat happens this turn. Is that correct?

Correct, troops only fight once per bound, pussuit does not generate another combat this round. Also, overlap in the previous case is not combat.
Top

This particular situation illustrates one of the reasons for the flank rule in Triumph. In Triumph an stand of troops is a large enough body of troops that it does actually have a flank, i.e. a single element getting hit in the flank suffers a flank penalty. there is no free turn to face when touched on the flank.

Another important issue is that your pike block cannot be broken by a single skirmish unit simply touching the rear rank. If your skirmishers touches the flank of heavy foot (front, rear rank or both) they do not automatically turn to face. They suffer the flank penalty, if they win the combat they can choose on the next bound to face the skirmisher (using command points) or they can continue forward (at 2 MU in the skirmishers ZOC after he is repelled).

The Skirmisher can harass and slow down the pike block or the Heavy foot formation, and maybe get luck and kill some. However it is also possible the heavy foot will shrug him off and keep moving forward while keeping a wary eye on those pesky dudes on the flank.


Heavy and elite foot less likely to suffer from such flank attacks, pike blocks (+2 vs +2) I recommend cover those flanks with your own light troops

Thanks for the confirmation that we got this all correct.

This has come up often enough that I agree: I should encourage the Pike player to cover their flanks more consistently

The tradeoff between width vs. depth in Pike deployment makes this a necessary skill to learn.

Check out the Rabble Troop type, available in many hoplite armies.

Cheap, but very useful for covering the flanks of Pike block formations.
Top

Yep, I have Rabble in the HF hoplite army pictured above; but the Alexandrian Macedonian player doesn't have that option to protect their pike.

Skirmishers, Light Foot and Raiders all more expensive, but I try not to let Big Al leave home without some

Going back through the references, I did not see anything in 68 Rear Support that takes away the rear support add. Did I miss it or is it in a different section?

I was reading rear support last night and found nothing that negates rear support due to contact with an enemy element. The only rule I found was a rear supporting element could not pursue if it fought another combat. So, you will have to defeat the rear support such that it no longer meets the qualifications.
Top
Post Reply
28 posts