My son and I played two battles of Triumph! This week using the Ancient Libyans and the Early Egyptians. The setting was 2200 BC, the time of Neferkare of the 6th Dynasty towards the end of the Old Kingdom.

The Libyan forces were nineteen Rabble tribesmen, with two Skirmishers and a Warband general. They also had the Pack Trains battle card. I commanded the Libyans.

The Egyptian forces were an Elite infantry general (in this case the Pharaoh himself wearing the blue war crown), six units of menfat Raiders, three Hordes of local troops, four Bow levy, and two Skirmishers. My son commanded the Egyptians. 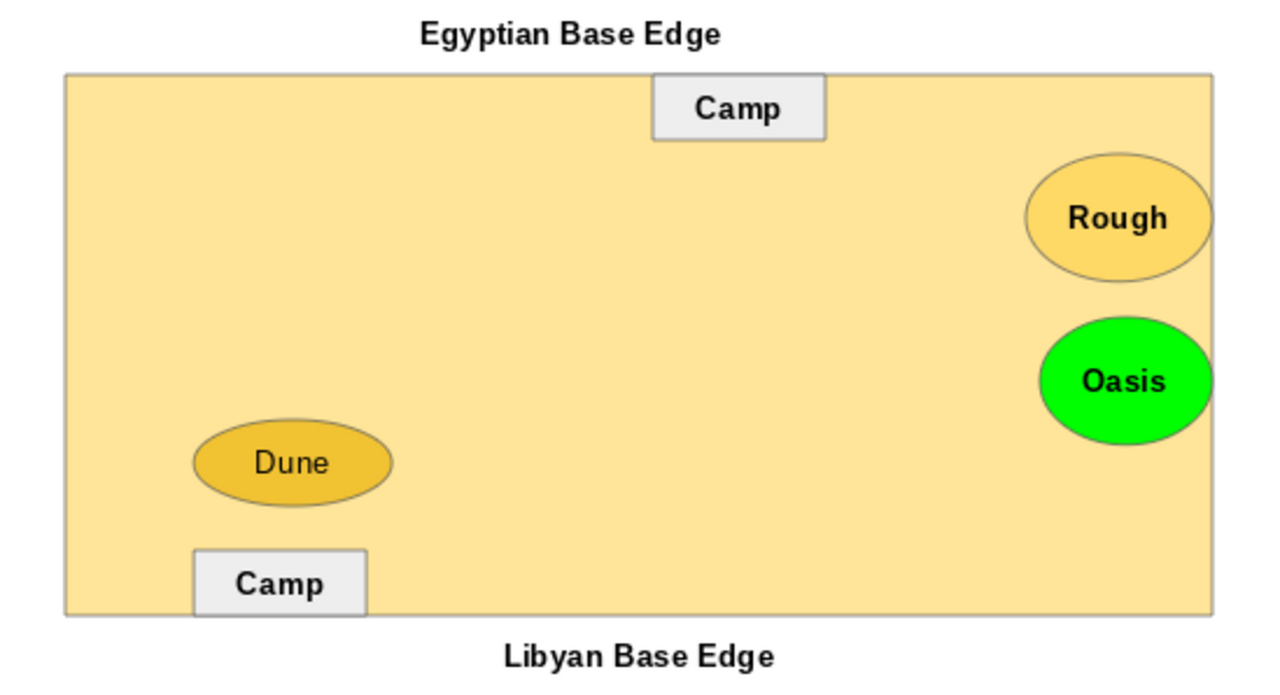 The terrain was Dry with three features - a Dune, some Rough, and an Oasis. These were all towards the edges of the board and played little role in the battle. 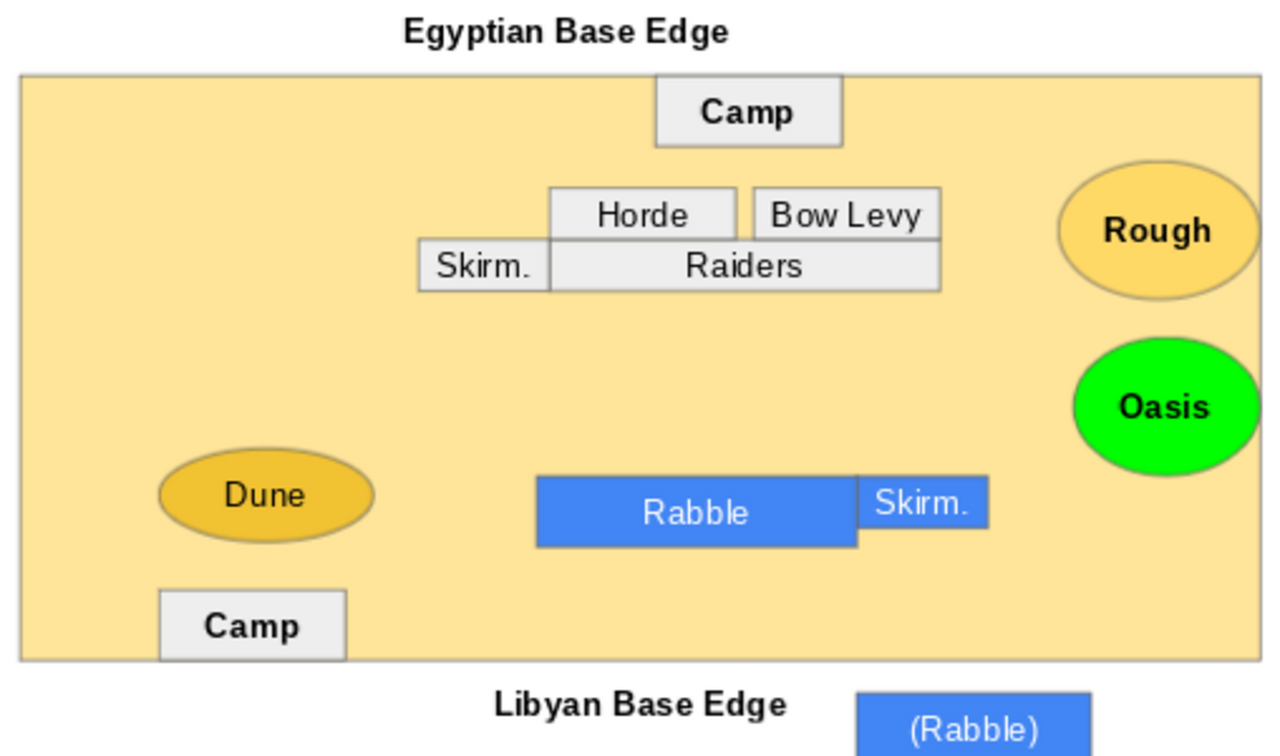 The Libyans had the option for a flank march, which would consist of eight stands of Rabble. The rest of the Libyan troops set up in a deep mass in the center. The Libyan plan was to try for the Egyptian camp with the flank march while avoiding defeat in the center.


The Egyptian plan was to strike the Libyan main body with the Raiders and Horde. Skirmishers would be sent to raid the Libyan camp. The Bow Levy would hold off the flank march. 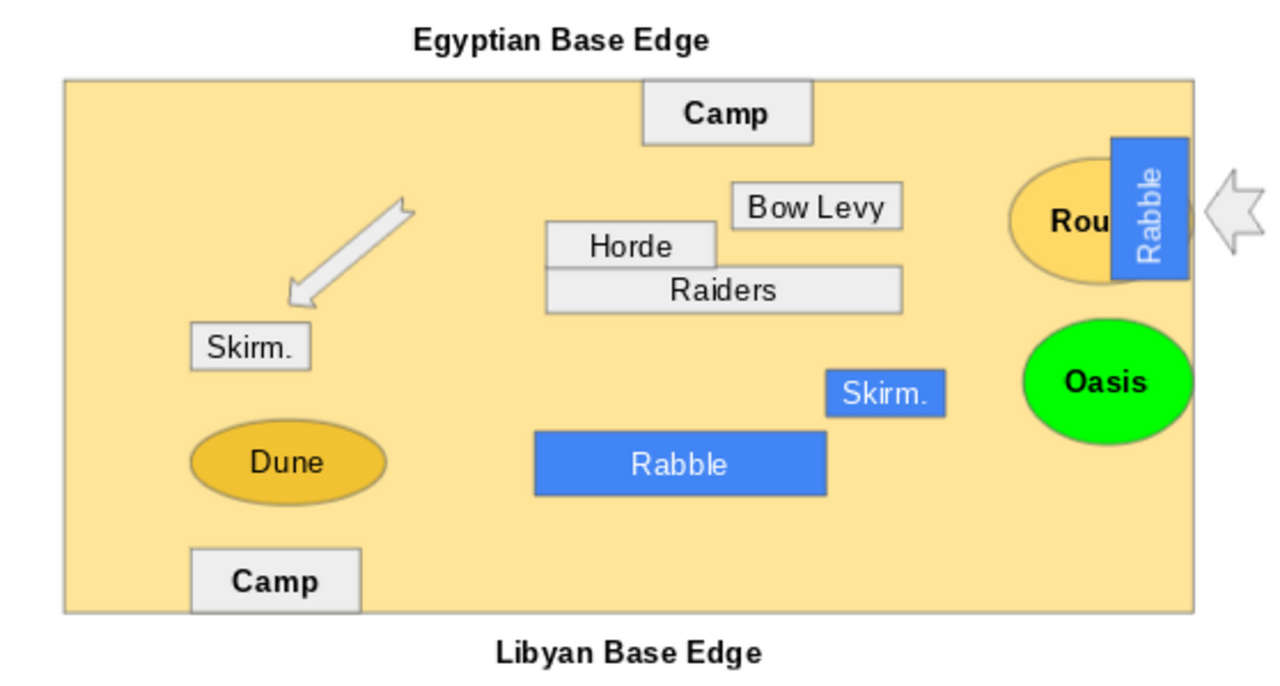 The Egyptians moved first and the Skirmishers moved rapidly towards the dune in front of the Libyan camp. The main body advanced slowly to keep pace with the mass of conscripts attached behind their right flank.

This presented a dilemma for the Libyans. Should the flank march continue as planned, or come in near the Libyan camp to counter the Skirmishers? The Libyans decided to continue with the plan, counting on the fact the Egyptian Skirmishers were going to be far from the main battle where the Egyptians would be fully engaged. 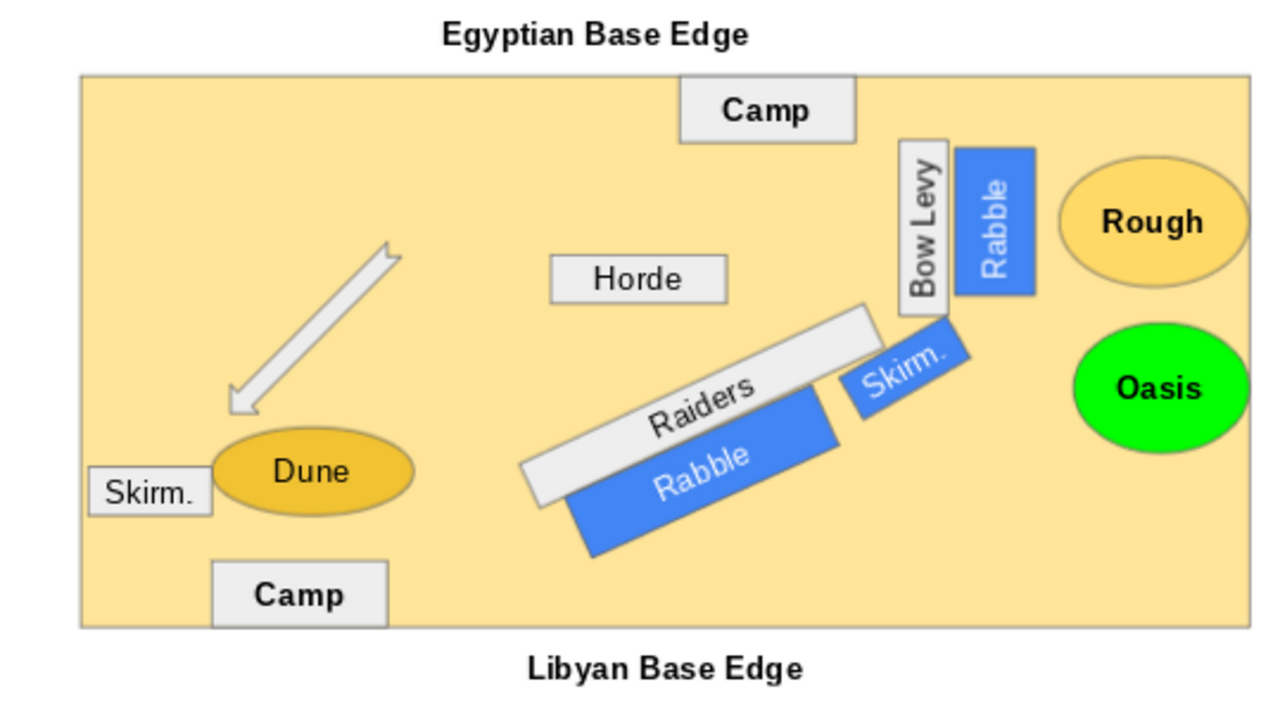 The Egyptian Raiders continued to advance steadily, still hampered by the slow-moving Horde. The Libyan flank march was the main effort and moved quickly. Most of Pharaoh’s focus (command points) was on moving the Bow Levy and some Raiders to counter the flanking Libyans. The Egyptian Skirmishers therefore faltered in their mission, far from Pharaoh’s eye.

The Libyan flank march destroyed the Egyptian Bow levy (and the stand of Raiders sent to support them) then turned their attention to the camp.

The Libyan main body slowly wheeled, bringing their right flank closer to their flank marchers. The Libyan skirmishers went forward to support them by drawing off some of the enemy standing in their way.

Meanwhile, the Raiders abandoned the Horde and moved forward rapidly. The Raiders, along with the Pharaoh (Elite Foot General), made contact with the Libyan main body and began scattering the tribesmen.

The Horde played no further part in the battle. 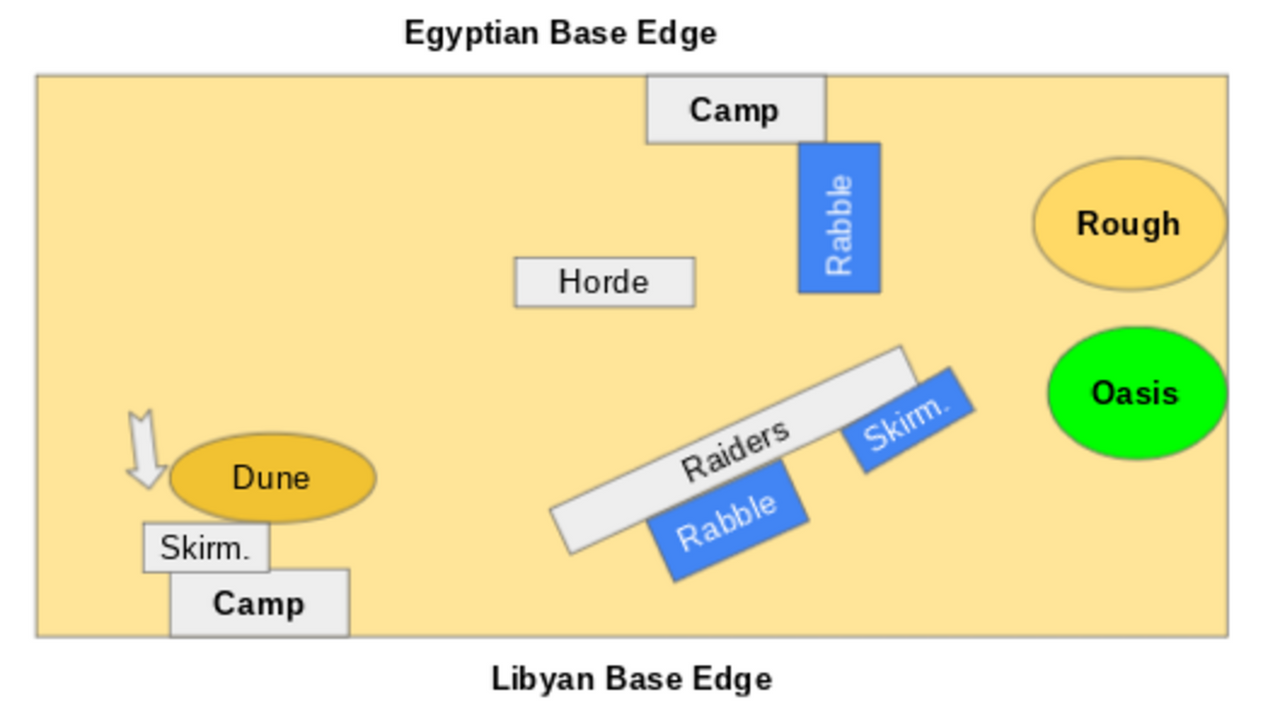 The issue hung in the balance, with both sides within a few points of victory. The issue was decided in the camps. The Libyan Rabble failed to take the enemy's camp. Soon after, the Egyptian raid on the camp finally went through. The loss of the Libyan camp ended the game with a narrow Egyptian victory; 16-12.
Top

A Libyan scout is seen near the oasis. 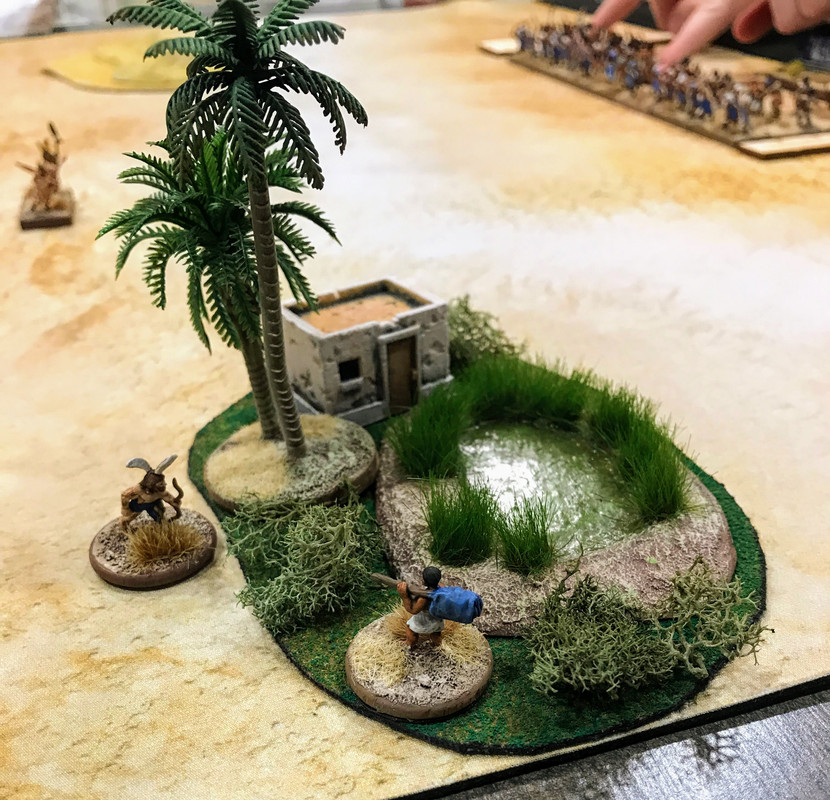 The Egyptians deploy in response to the threat. 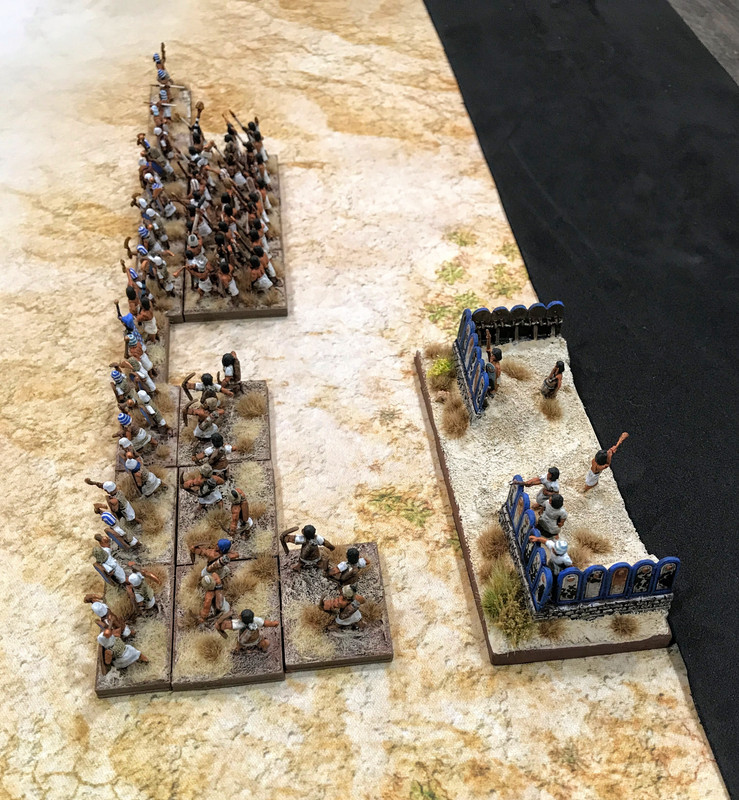 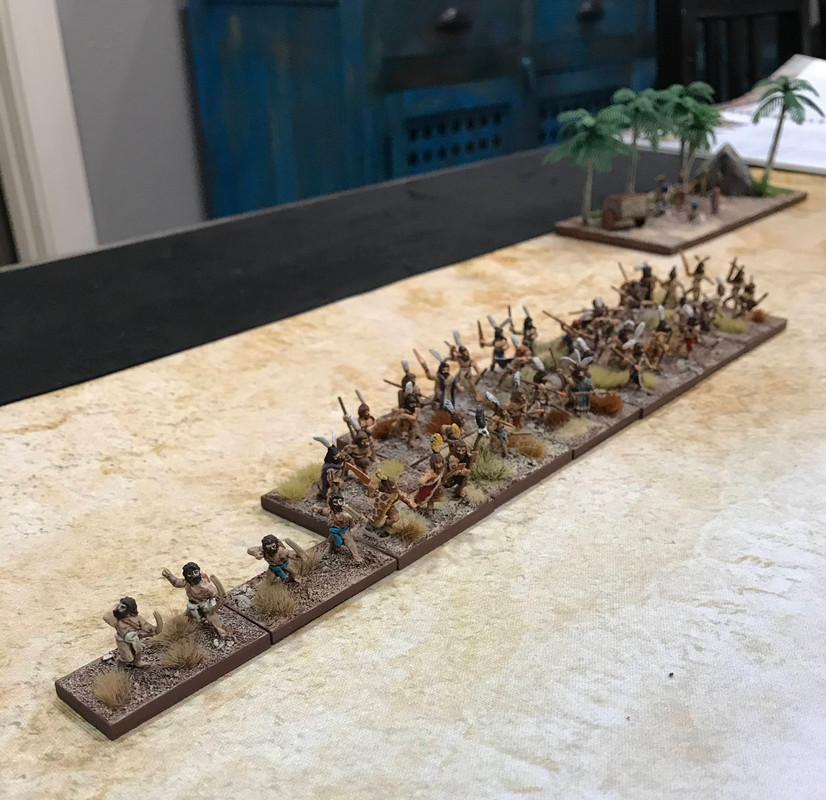 Egyptian Skirmishers start for the camp. 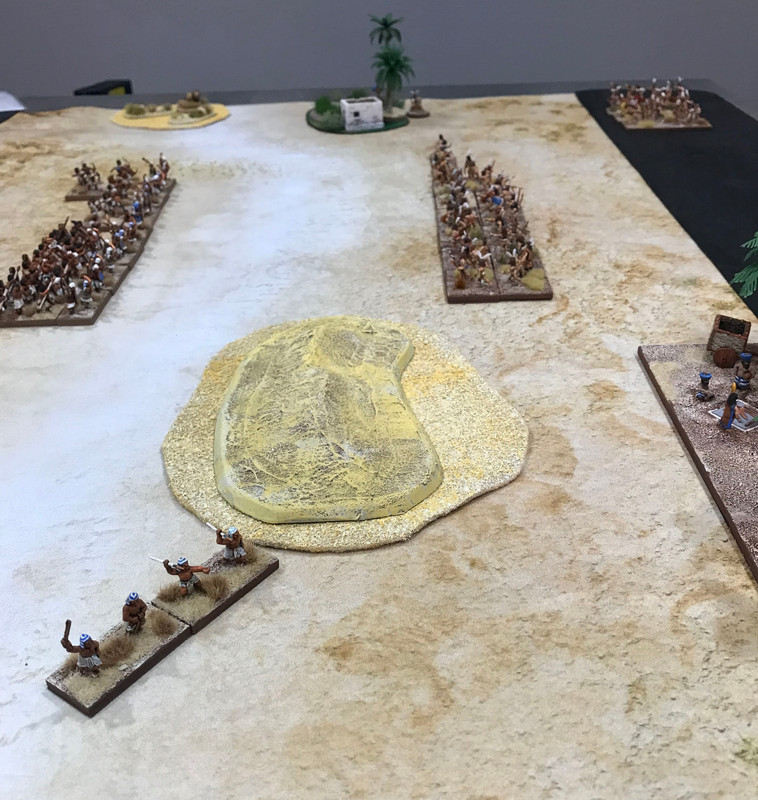 The Libyan flank march arrives on the field. 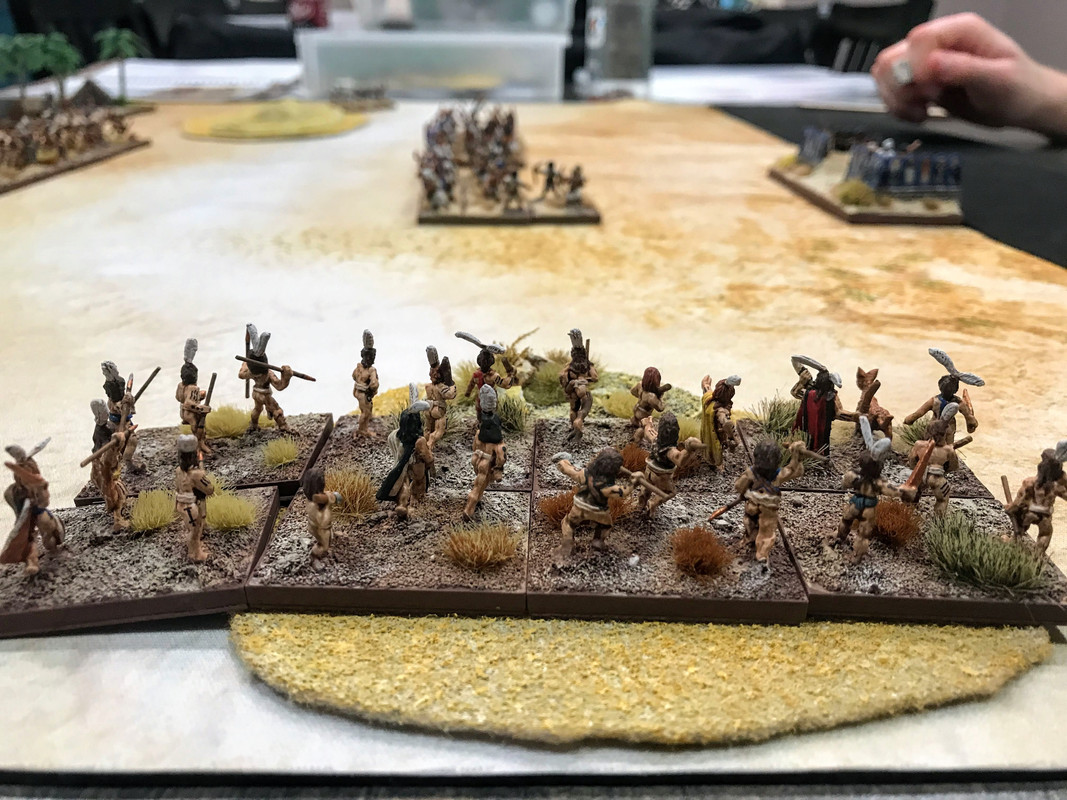 Battle is joined in earnest. 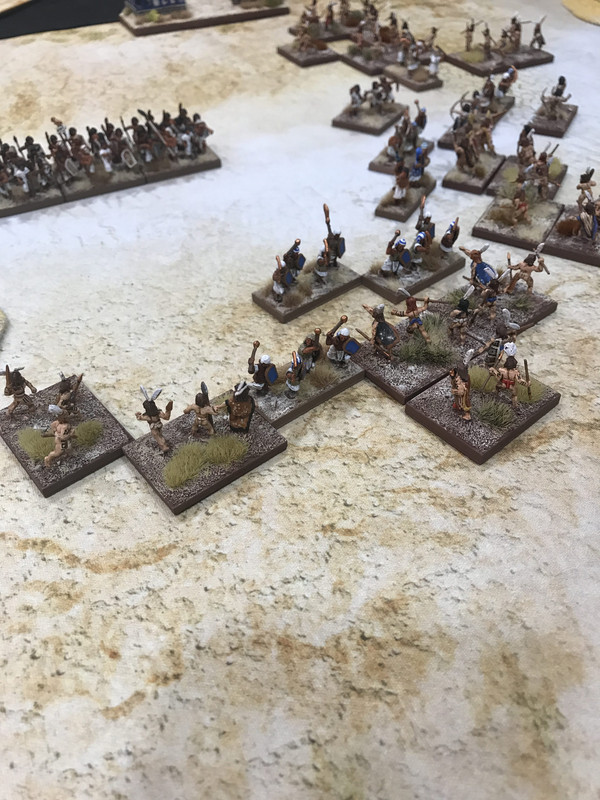 The Libyans turn to attack the camp. 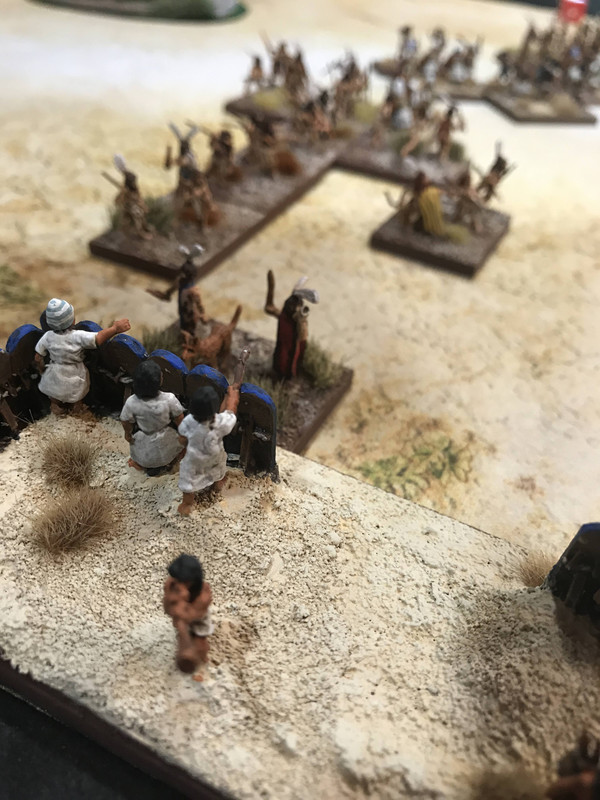 Egyptian Skirmishers take the camp. The demoralized Libyans flee back into the desert. 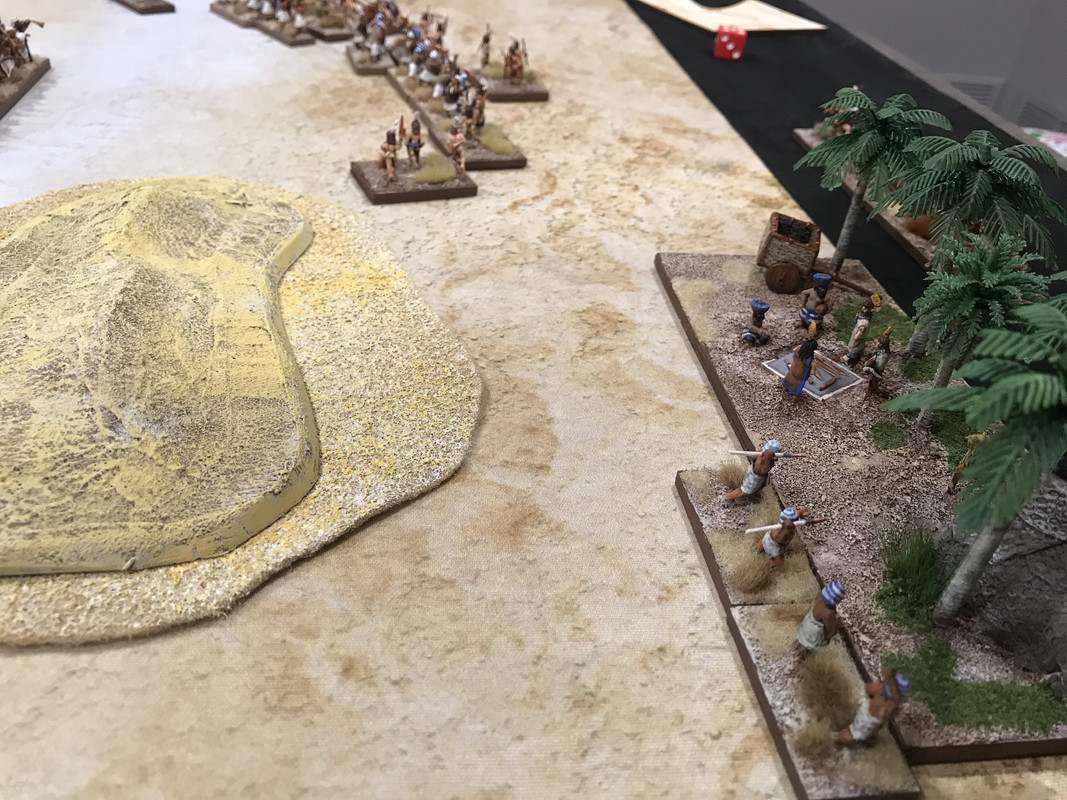 The flank march gave the Libyans the opportunity to fight some of the lower-quality troops and distracted the main effort. It also gave them a shot at the camp.
Moving as a group with Horde made the Egyptian advance unacceptably slow.
Sending the fastest Egyptian troops to attack the camp was a great idea. The Libyans should spare a Rabble to garrison the camp.
The Libyans have two skirmishers - send them with the flank march.
Top

We switched sides and played again. I sent my Raiders directly at the Libyan main body as quickly as possible and used the Hordes to meet the flank march. The Bow Levy were left lingering in and near the camp. The Libyans put their Skirmishers in the flank march but the Horde was tough to beat. The Egyptian Raiders destroyed enough Rabble to win the game before the flank march could make enough progress. Egyptian victory 16-2.

Here are a few photos of the second game: 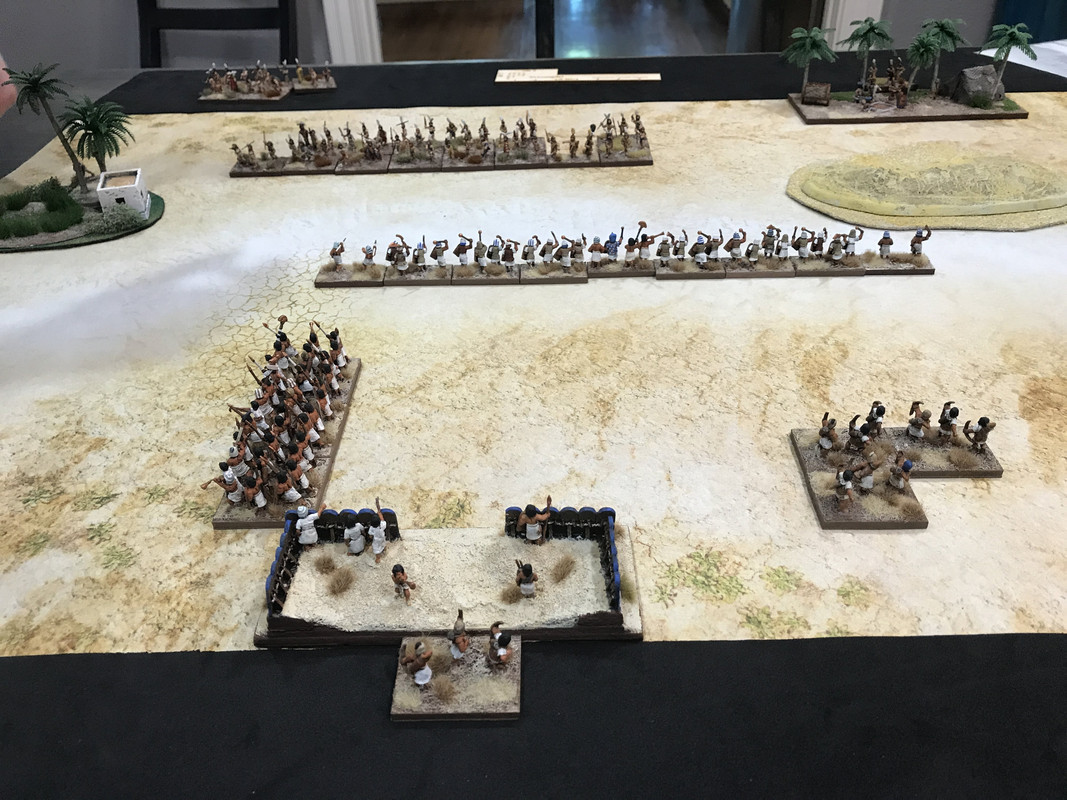 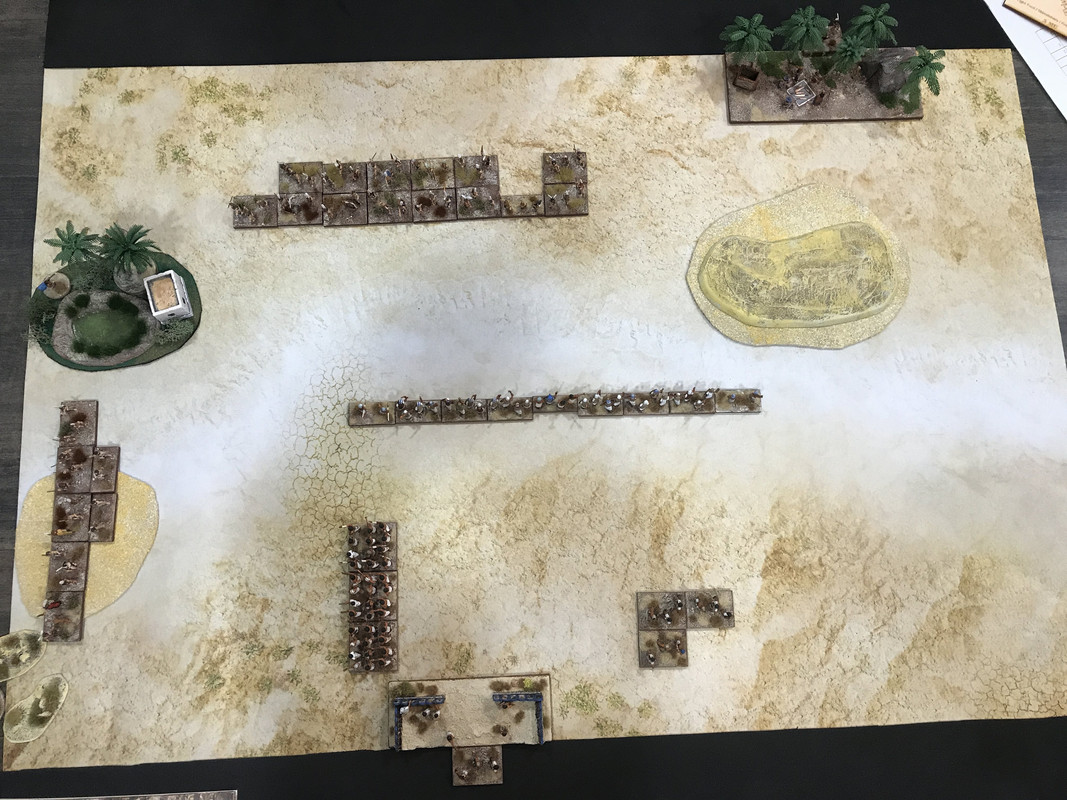 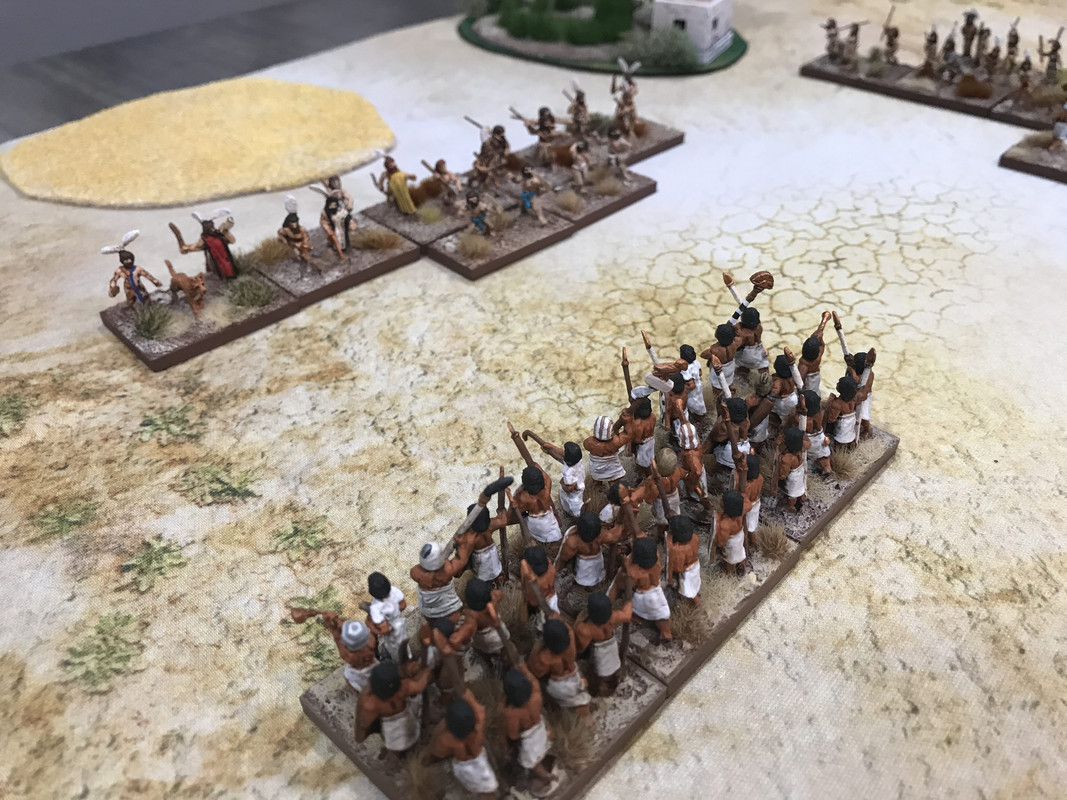 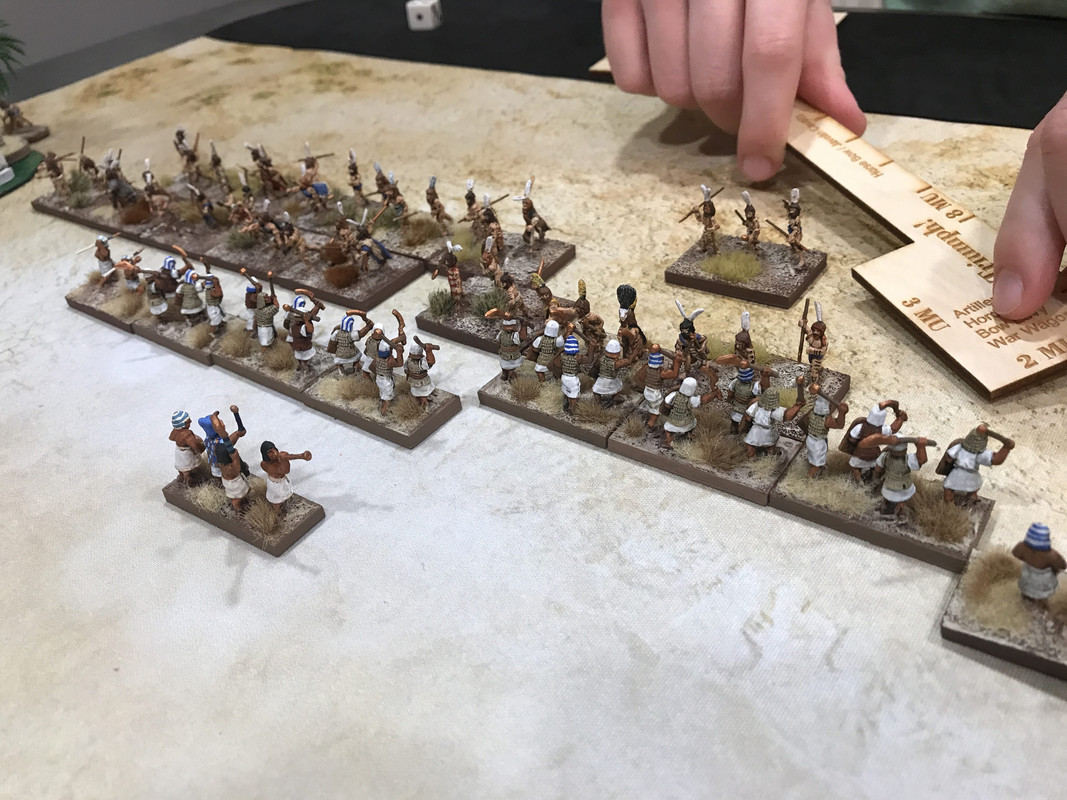 Great reports and photos! Who would think that rabble could look that intimidating?

Thanks again for all the positive comments.

I believe a Libyan army in DBA was 11 stands of "Psiloi" and a Chariot, so a total of 24 figures on the board. This Triumph! version has 64 figures and they are almost all on larger bases, so it does give a more spectacular look.
Top

Very nice and neatly presented. Camps certainly are a vulnerable and important unit in these rules. (as they should be)
Top

I really want to see these photos.... some of my favorite armies. For some reason though, I can not see the photos in the posts. Not sure why. It looks like a broken link.