Yesterday we did a Zoom game and started play testing the Battle of Marathon scenario. Here are a few action shots. 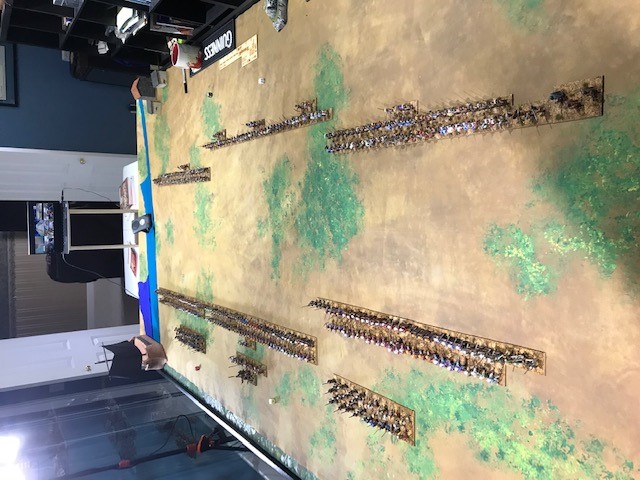 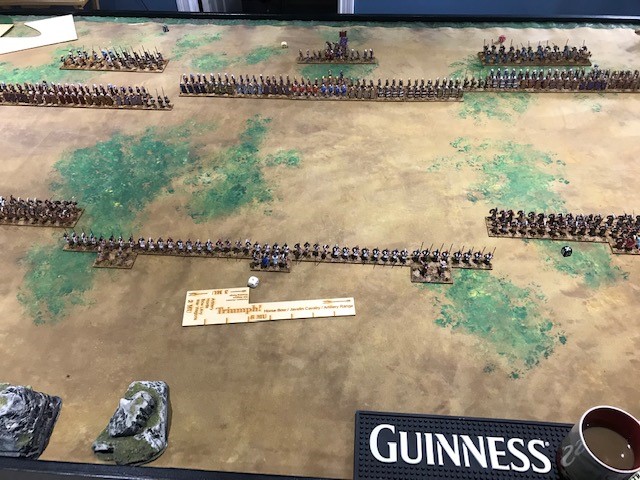 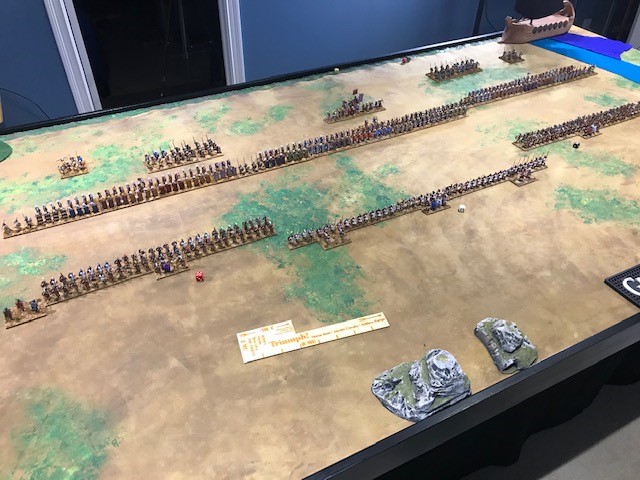 Closing into archery range and the Greek onslaught. 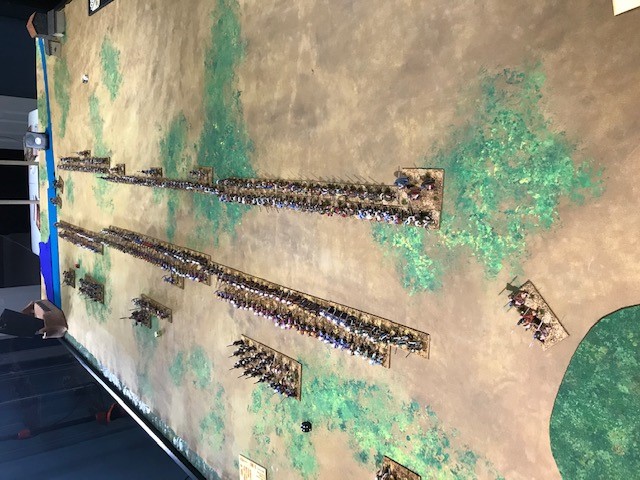 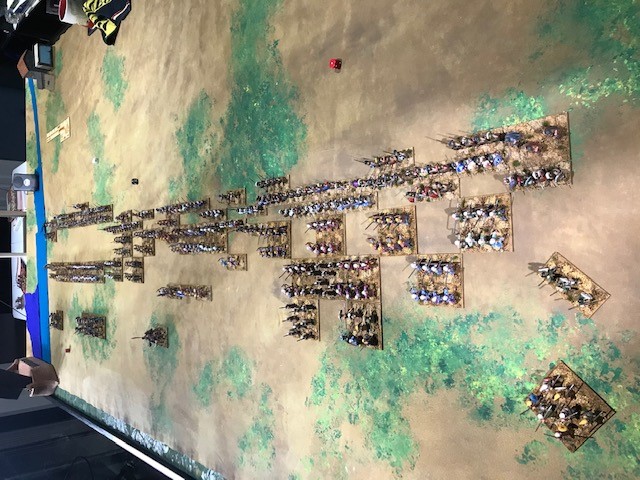 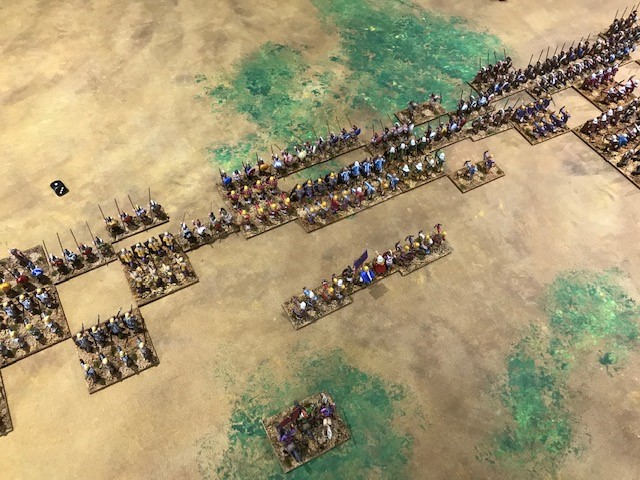 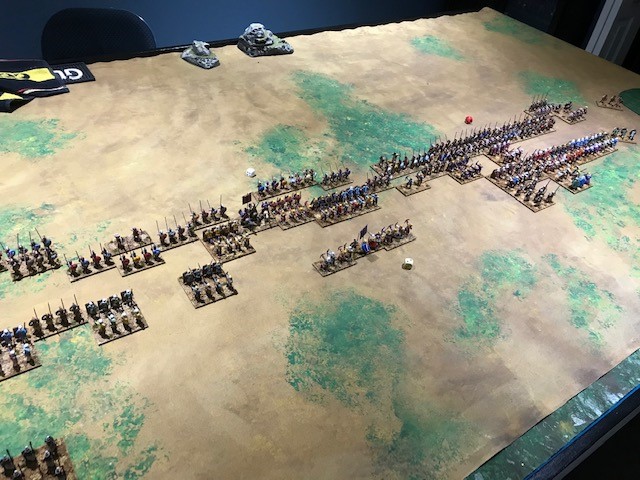 In the end the Persian center broke before the Greeks center (which was close to breaking). Persian archery was definitely below par in the battle which weighed in heavily towards a slight Greek victory.

Marathon was the first battle we fought with the new rules when we returned to regular Triumph! gaming a few weeks ago, since it looked quite easy wrt army compositions (and terrain in particular). Our refights were standard 48-pts games, with Athens usually just bringing 16 units of hoplitai (HF) in the historical setup, or substituting 1-2 of them with toxotai (Sk) and/or peltastes (LF) for variety in the following attempts. We gave the Achaemenids two JavCav units, two units of Ionian hoplites (HF) and an almost even mix of Sparabara (Pav) and Levies (Hd). No terrain whatsoever, and no camps (Athenians didn't have one, while Persian ships apparently only came into play when the battle was over).

One thing we struggled with in the first attempts, when we were trying to recreate the historical setup, was the thinned Athenian centre. We deployed the outermost Hoplitai in two ranks, but there seems to be no "deep formation" battle card available in this period (and after all, wings were just standard 8-deep, so perhaps that would not be the right tool for this). One possibility we considered is to have an ad-hoc scenario battle card ("thinned ranks" or something like that) giving a flat -1 in close combat for -1 pts per unit.

In the end, with no terrain and an almost monotype Athenian army, we found Marathon to be a bit too 'flat' to have an high replay value... So we switched to Plataea "what-ifs" scenarios with plenty of terrain, allied commands, etc... We're having a lot more fun with this one, I must confess.

Do you have any specific advice (OOBs and the like) for this one?

Many thanks in advance!
Top

Markus,
Thanks for the comments. Yes it is really a straight forward line up shoot and fight. Flanks were secured mostly.

This is the OOB I am playing with and discussing back and forth with DK. It is easier to represent the thin line in GT (zoomed in more). However the flanks was not so much the "deep formation" as we try to represent later with the Theban innovation as it was no reserve in the center.

I am playing around with this OOB still and there really is no Cav at the battle so in terms of the fight you have a force that must rely on shooting up the enemy formation before contact vs. a force which must close and hope to do so in good order. in our battle the center of the Athenian line nearly broke, the only thing that saved it was the terrible Persian shooting.

I am planning to use these troops to do Platea as well (got to paint some Spartans) which I agree looks much more interesting in terms of maneuver.


Persians
• 1x JavCav for the center command General (in reserve)
• 25x Pavisiers -- all three commands
• 1x Battle Card: Hold The Line. Center command Pavisiers only (and maybe only a couple of stands of them -- the Immortals)
Flank Commands (2 identical, each 42 pts):
• 4x Horde
• 1x Light Foot
• 7x Pavisiers (including General)
• 1x Heavy Foot
And Center Command (60 pts):
• 2x Bow (more or less in the center of the line)
• 10x Pavisiers (2 or 3 stands marked as Immortals)
• 1x Heavy Foot
• 1x Skirmishers (reserve to plug gaps)
• 1x JavCav (in the rear) General
• 2x Battle Card: Hold the Line. Pavisier Immortals only.
Special Rules: Center Command stands cost +1 pip to move backwards except Immortals and JavCav.
--------
Athens and Plataea:
• 2x Rabble (Javelinmen with no shield), 1 on each flank
• 2x Light Foot (Thracians), 1 on each flank
• 2x Skirmisher (center command reserve)
• 42x Heavy Foot
Organized as follows:
Flank Commands (2 identical ones, 50 pts each):
• 1x Rabble (jav with no shield)
• 1x Light Foot (Thracian peltasts)
• 15x Heavy Foot
Center Command (45 pts):
• 2x Skirmisher
• 12x Heavy Foot
Center command deployed in a long thin line with the skirmishers behind to fill gaps, and maybe 2 reserve stands of Heavy Foot not in the front line. Flank commands with their heavy foot double-ranked in the open (no combat benefit for it, but shortening their line a bit).
Persian camp is one or more beached ships behind their center. Greek camp is the mountain pass behind the center of their line.
Top

Since the battle account mentions that the Hoplites rushed into the Persians (which the Persians did not really anticipate). I have a suggestion for the scenario that you have the special rule that the Athenians, can March move to within 2 MU of the Persians, thus providing the Athenian's the rush in that they performed. Just a thought.
Top

I have considered trying to recreate that, however I am also trying to create a balanced and fun convention game.

The main weapon of the Persians is the archery fire which is important for breaking up the line and pushing units out of charge range by forcing them to fall back, not just destroying units out right.

If I added a special increased speed rule you for the hoplites, I think it would require some play balance in that I would have to reduce the number of Hoplites to balance the battle. This might actually be more representative of the battle, but it would take some thought.

In reality what I would be doing is effectively increasing the point value of the heavy foot.

We have another play test planned so will look at that after that second play test.
Top

From what I can tell according to the historical account, the Persian setup is too wide. It needs to be deeper and about 2/3rds the width they currently shown in the pics. The Greek Flank Commands should be narrower (thus deeper) and somewhat further away from the Center command allowing them the positioning to possible perform the enveloping tactic they used. For the Persians, I would suggest they are deployed in 2-3 lines for each command with spacing between each line forcing command points to used to reorient the formations from the rear to counter the Greek move up. Again, just my 2 cents worth.
Top
Post Reply
9 posts • Page 1 of 1