Hi all, just thought I’d write a quick note about the games my friends and I played today. We are all new to this system so the playing field is very even at this stage.

If I remember rightly Rob raced his Jav Cav (x3) around one of Michael’s flanks. This looked to be the master move but, didn’t go so well for him in the end. Undeterred Rob push forward with his main battle line of Heavy infantry, elephants and warriors. Unfortunately, Michael (who I should point out is totally new to ancients in general) had stretched his pike block out a little too much in the center. This cost him the game in the end as Rob's warriors and elephants made short work of his understrength pike-men .

This was another cracker of a game. Rob rushed his cavalry forward once again, and it bounced once again. I did some crazy mass central wheel with half my army placing it at an odd angle to his battle line. This was supposed to split up his elephants and make it harder for him to out mussel me in the center. It didn’t, what a fail, but in the end I did managed to dice my way out of trouble and into the winners circle. In short, Rob was robbed lol.
Game 3 Michael (Syracusan) vs Gaul’s (me)

This time it was my turn to push my cavalry forward on one flank while my rabble ran for a village on the opposite side of the field. Michael countered my cavalry by placing a blocking force on top of a hill in that sector of the battle field. Some good pip rolls on my part gave me an advantage in the center, so my warriors charged forward into Michael’s heavy foot. Combat started well for me but, at the end of my line the rabble let me down. This was to be my undoing as Michael’s troops rolled and bold me.

It was all over red rover, one win each.

Below is a couple of shots of my newly finished Greeks and Gaul’s. 15mm mounted on 28mm basing. 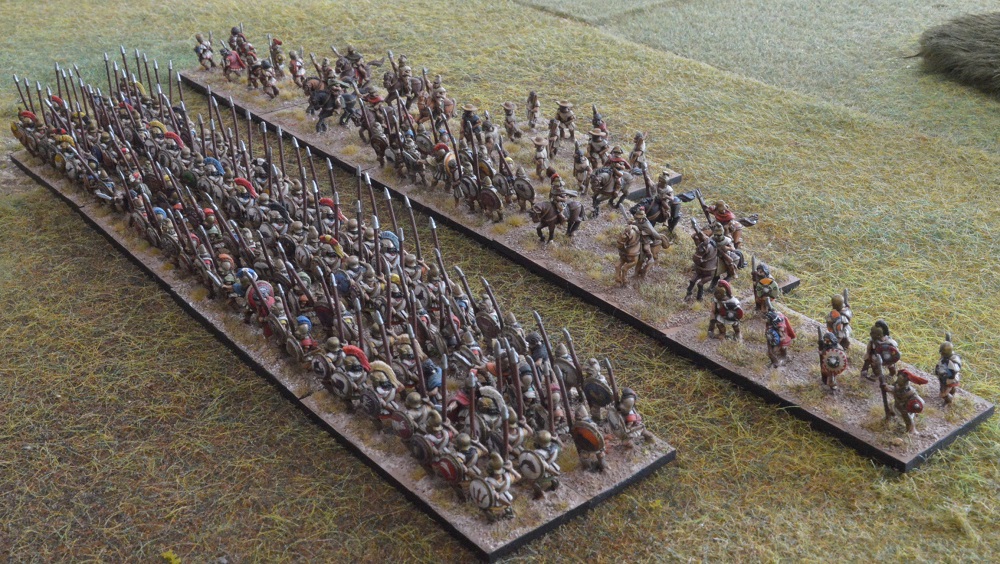 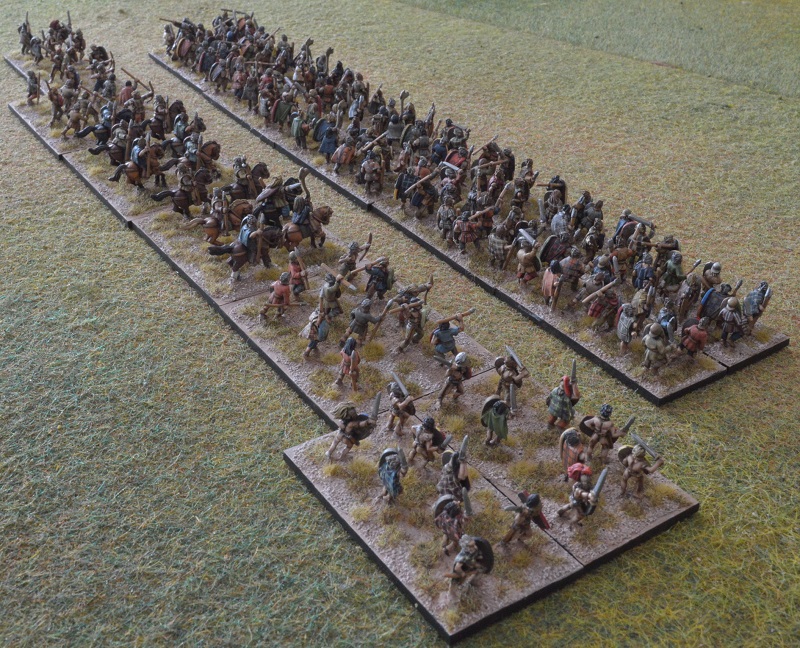 Glad you guys are getting in some games.
Top

Hi Roundie, all your armies look incredible. What I like most is the way close order infantry looks different from everything else... much more so than just having 4 guys in a row instead of 2 or 3. Double bases are definitely the way to go!

Unfortunately (for me), it's way out of my league in terms of space and painting time. I've tried to get the same mass effect using standard 40mm bases with lots of 6mm, 3mm and even 2mm figures... well, it's not the same thing. All of the smaller scales have a certain clunkiness to them, with fewer/more rigid poses and limited space between figure, which in the end somehow detracts from the overall effect. But someday...

I'm lucky enough to have a big gaming room so table space isn't a problem for me. I've also dipped my toes into 6mm figures but alas my old eyes just ain't up to the task of painting anything that small any more

....and my old eyes are barely up to playing 6mm let alone painting them!
thanks for the reports and stunning looking figures and battlegroups. Never thought of 15mm massed on 28mm basing but alas, time and space, are in short supply for now.
Top

Great looking armies! Lack of space prevents me from going double, but these look awesome.
Top

We are working are way towards that using plynths. Same figures can be used to play a regular 48 point game or a Grand Triumph game when 80mm plynths are used.

There's a few games these days that use double width bases for 15mm, likely because it looks so great!

Impetus, To the Strongest!, so it's nice to see these figs in all their glory, and you won't have to rebase