Pictures from our first attempt at refighting the Battle of Hydaspes. The Macedonian Army set up with Alexander on the right with knights and light Cavalry, Coenus with a similar cavalry force on the left. Pikes and elite foot deployed in the center. Porus setup with his elephants in the frontline with supporting heavy foot, horde and reserves of bow levy, his flanks were chariots, bad horse and bow levy. 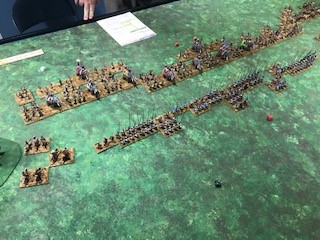 The battle opened with both lines moving forward while Coenus led his heavy cavalry around the jungle and rough terrain on the Macedonian left, Porus tried to counter that move. 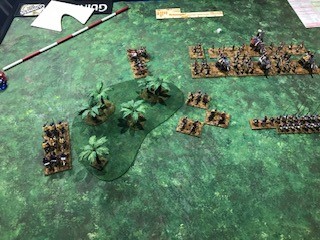 Alexander, being Alexander slammed into the Indian chariots and horse on the right. At one point he was surrounded and nearly killed, but cut his way out. 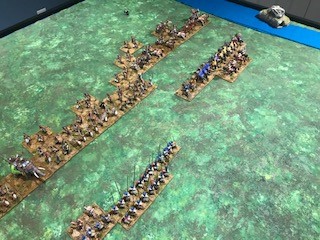 The elephants and pike hit head on in the center. This turned into a massive pushing match, but eventually the elephants would push into the pike formations and get overwhelmed, and elephants started to fall one by one. 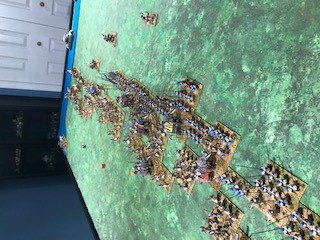 Meanwhile Alexanders Companions were too much for the Indian Chariots and eventually he broke that command. The center fell shortly after when too many elephants had been destroyed and the pike were fighting their way into Indian reserves.
Top

The end of the battle. 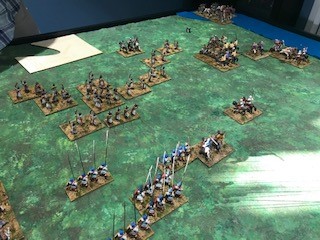 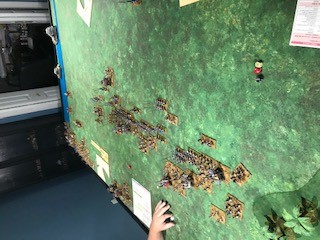 This looks great! Do you have the lists you used available? I really need a Classical Indian army I think
Top

We pretty much used straight Alexander and Classical Indian lists from Meshwesh, I don't have the exact list for this battle anymore.

We maxed elephants and about a 50-50 mix of Bow Levy and Horde from the list. Lot's of bad Horse too and max heavy foot.
Top

Yeah, I realize this was awhile ago, I must have missed it when you first posted it. I was curious how you split the commands. Grand Triumph is great for historical battles.
Top

Well, we might be doing that one at Historicon this year, if so I will have to repost and make sure to include the command splits.
Top
Post Reply
6 posts • Page 1 of 1