My son and I played two battles last week. He took the Nomadic Amurru and I took the Early Sumerians.

The Nomadic Amurru have five Light Foot, three Archers, and the rest are Rabble, Skirmishers, and Bow Levy.

The Early Sumerians have a Raider, supported by six Skirmishers, some Rabble, and mobs of Bow Levy.

The first battle had a patch of Rough terrain in the center of the board. My Bow Levy went in the center with a few extra stands forming a second line that could move to fill the gaps that I expected to form when the Amurru Light Foot hit my line. The Amurru Archers formed in a group on the left flank of their line.

Both lines advanced to contact. The Sumerian center was hit by the Amurru Light Foot and took heavy casualties. The Amurru archers did not destroy any stands but did force the Sumerian right flank to keep their distance. The Sumerians did not have enough combat power on their left flank to make any progress. The Bow Levy in the second line were too slow to respond effectively. In the end, it was an overwhelming Amurru victory.

This battle had no terrain in the center. The Sumerians deployed with more Skirmishers on their left flank, with the intent of trying to overwhelm the Amurru right flank. The Bow Levy formed the center, with the Raider in the front line. Some Skirmishers formed a second line. The Amurru alternated their Archers and Light Foot in the center. Their plan was to use the archers to drive back some of the Bow Levy so that the Light Foot could exploit the gaps.

(On the diagram it looks like the Sumerian Skirmishers were equally divided between the flanks but there were really more on the left. ) 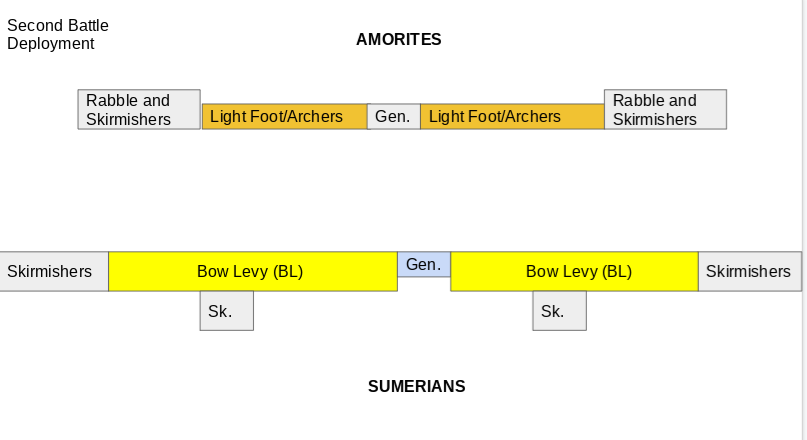 The Sumerian skirmishers, with their superior mobility and greater numbers, were able to destroy part of the Amurru right wing and even start a run on the Amurru camp. However, the Amurru center broke through the Sumerian line before any more progress could be made. A decisive victory for the Amurru.

Any ideas on deployment strategies or battlefield tactics for the Sumerians that might assist in a future matchup? I think trying to overwhelm a flank while avoiding combat in the center as long as possible would be good. Perhaps trying to get some rough terrain in the center and keeping it between the Bow Levy and the Amurru, instead of advancing into it like I did the first game.
Last edited by Texus Maximus on Tue Oct 13, 2020 7:03 pm, edited 1 time in total.
Top

despite definitely not being an expert I've tried to think about what I'd do if I were the early Sumerian player. And the answer is in fact very simple: I'd wait until Gilgameš shows up, then shred the nomads to pieces.

OK, seriously. This seems a really tough one. From what I can see, you've got absolutely *zero* favourable matchups- in fact ,you've got several *very unfavourable* matchups.

Re: Bow levy - Your bow levy's only strength is rendered useless by the fact that there's no mounted, so you're left with lots of unwieldy units that fight at +2, won't be able to contact the Amurru archers unless in very lucky circumstances (their recoil distance and movement rate are almost the same), and can't close the door in one action (if my understanding of the rules is correct).
Re: Skirmishers - Not even a single one of the skirmishers' immunities-to-being-doubled are in play in this battle, so in fact you're paying one extra point per stand just for their increased mobility. With this in mind, I don't think that maxing out on them is your best option in this specific battle.
Re: Rabble - I'd say massed Rabble would be your best option in theory- but of course you're only allowed to take 2 at most, so even that's not an option.

What does all this leave you to work with? Very little, I'm afraid. One advantage is that you practically *know* how the Amurru will deploy, since it would be very difficult for them to reach the required 24 points in the centre zone without including their archers and/or light infantry. Another small advantage is that at 4 points each, their archers almost seem like overkill compared to the targets you'll be offering them (perhaps a meager consolation).

Due to all the above, what I'd try to do is the following: take 3 skirmishers and 2 rabble. Put all the bow levy in the most remote area you can find, possibly anchoring at least one flank in rabble-containing terrain. I'd even consider forming the bow levy in two ranks if needed. Form a group with all the skirmishers and the general- they can pass through everyone else for 2 CPs (one for the general and one for all the skirmishers, but I could be wrong). Then, depending on who has the advantage and/or how the board is set-up, either put them wide on the flank that looks more promising for immediate aggression (if you already know which is which), or right behind the central mass of levies (if you still don't know). In battle, I'd just leave the main battleline static while trying to be as aggressive as possible with the general+skirmishers group, maybe running for their camp if possible and/or isolating some (putative) weak part of their line. Rolling lots of 6-1s would surely help.

I know it's a painfully weak plan, but I really can't think of anything better at the moment... Does anyone else have any idea?

PS - by the way, thanks for the discussion: for me, this kind of planning is almost as fun as actually playing out the battle

Very good points; I have to agree that avoiding combat with the Bow Levy while rushing forward on a flank with the Skirmishers and Raider General is a good plan. I made step towards that on the second battle and did slightly better. Having the General move with the Skirmishers is a great idea also, in order to avoid command and control problems with the main effort.

Images from the first battle:

The Sumerian center, confident of the blessings of Enlil, prepares to move forward to trod underfoot the wretched Amurru, a people ignorant of the gods. 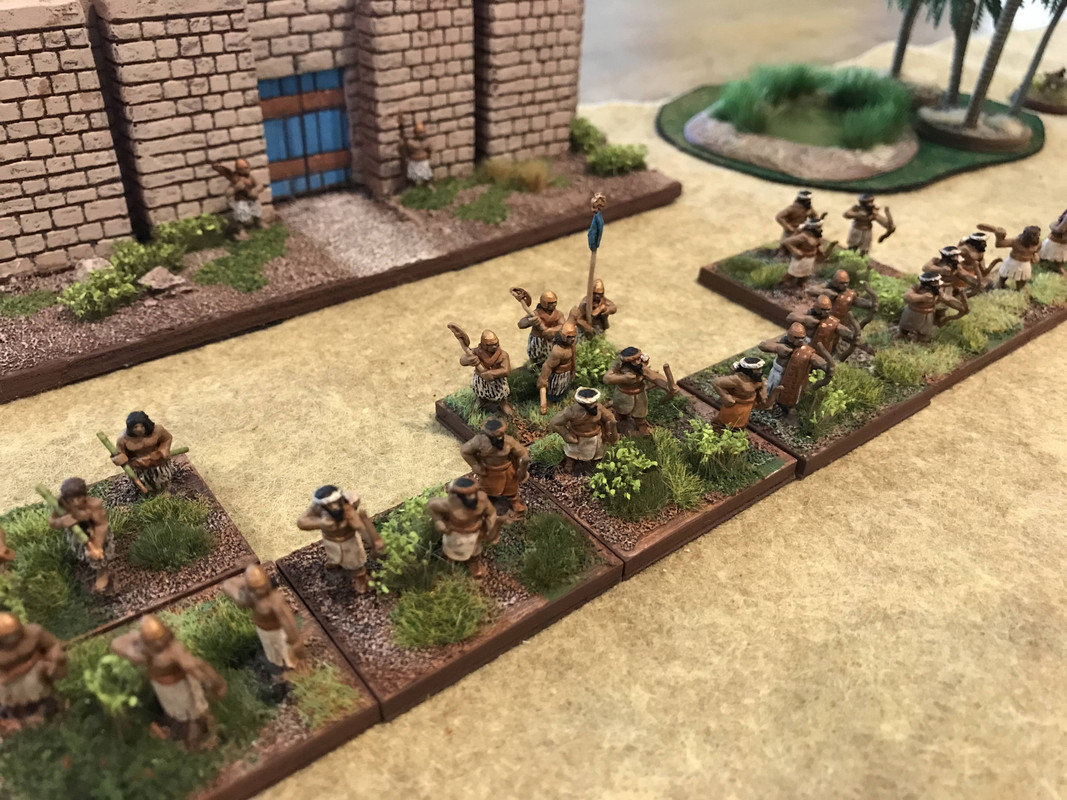 The Amurru, ravenous defilers, who know not houses and eat only raw meat. 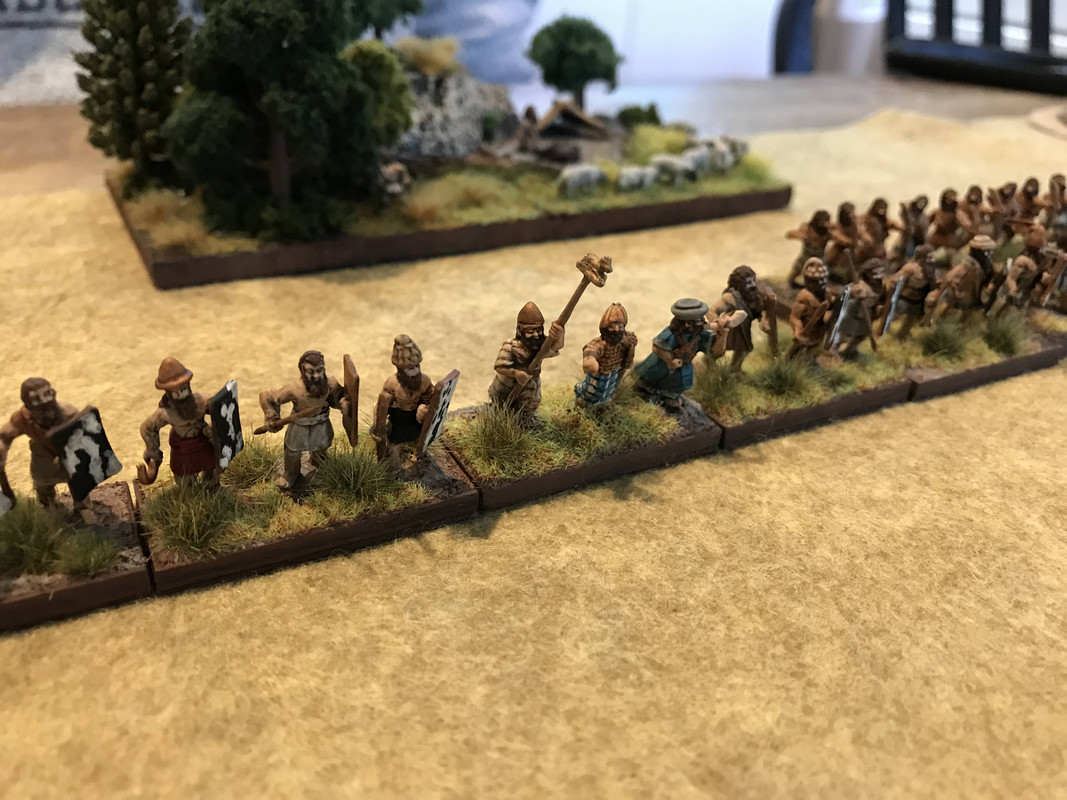 The battle lines draw near. The bowmen grow fearful now that they see the giant Amurru at spear's length. 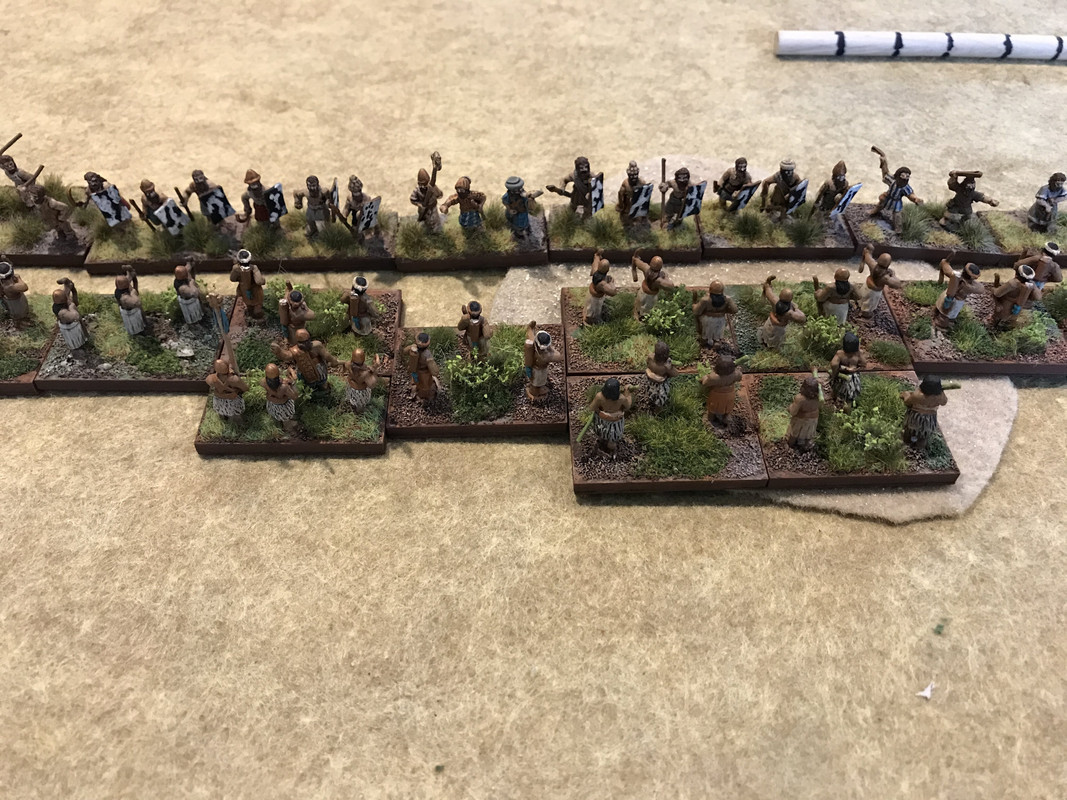 Enlil has withdrawn his favor today and the Amurru move forward like the flow of the great river. 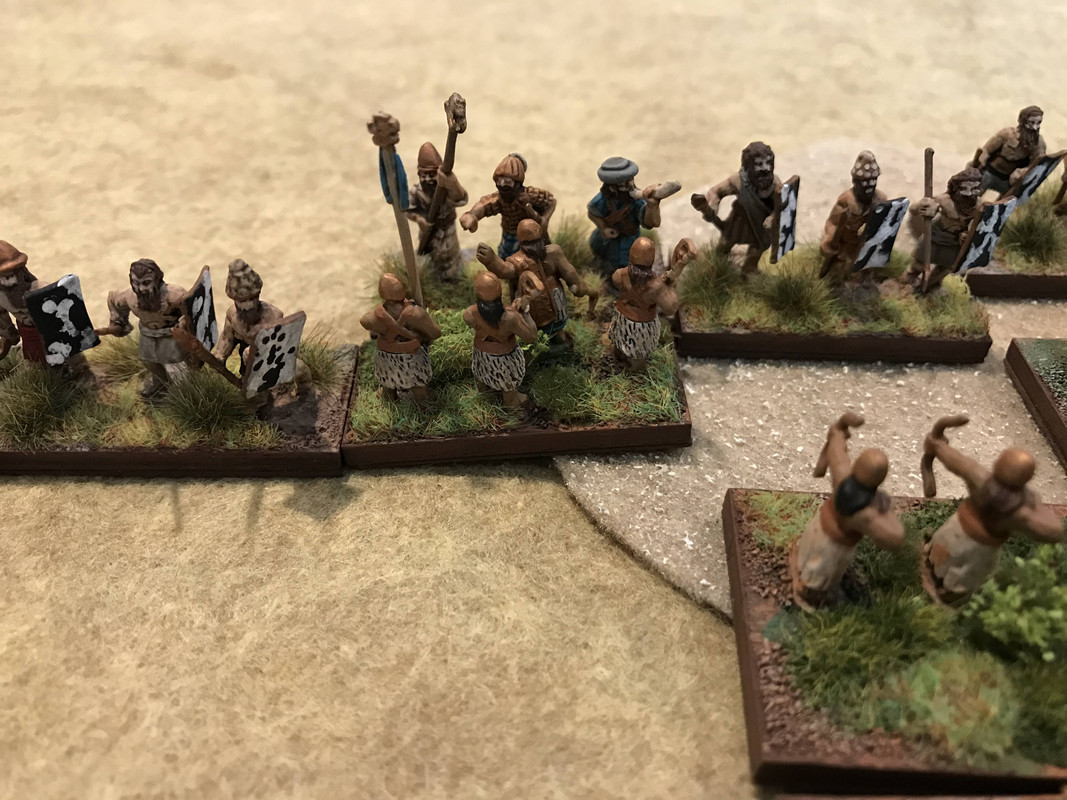 Very interesting question. Thanks for posting.

The only advantages that I see for the Sumerian is a +2 Maneuver Rating and high numbers of stands. I'm assuming high number of stands because Bow Levy cost 2. All other advantages go to the Amurru that I see. This tells me you need lots of terrain and hope you roll well on Tactical Advantage. And that tells me you should try to wrap a flank. Maybe even a flank march if allowed.

However, that means fewer troops in the center so try to hold off on contact in the center as long as possible. One way to look at it is that you are Hannibal at Cannae. But with Bow Levy moving 2, you can't break off from anyone. Ugh.

In essence, I have nothing more to give in terms of advice that MarkusB hasn't already stated. Very interested in hearing what the others have to say.
Top

I agree with Markus' assessment. My addition to that is to have the General's stand with the skirmishers in a column almost to the flank edge and then keep force marching them until they cann't anymore either due to opponent's movement or they are in position to go for the camp. Every so often a couple of Cmd Points will need to be spent for the Bow Levy left behind.
Top

Wow! Just... wow. I've checked your posts in the Miniatures & Camps sections and they're all stellar. Your attention to detail is inspiring, and I really like the fact that you manage to put both 'History' and 'story' in your pieces. Great stuff! Thanks for sharing.
Top

Thanks MarkusB! I try to share the research and sources I have found so that other people interested in the same army have someplace to start.

I have a few pieces of scatter terrain in these photos from the next battle (below), including a Sumerian farmer plowing a field and a ram caught in a thicket. It just looks like a small tree by the swamp in the photos but trust me it is there!

The Sumerians prepare for battle against the vile Amorites; with the right hand the Lugal will hold them while with the left he will strike them with a stone. 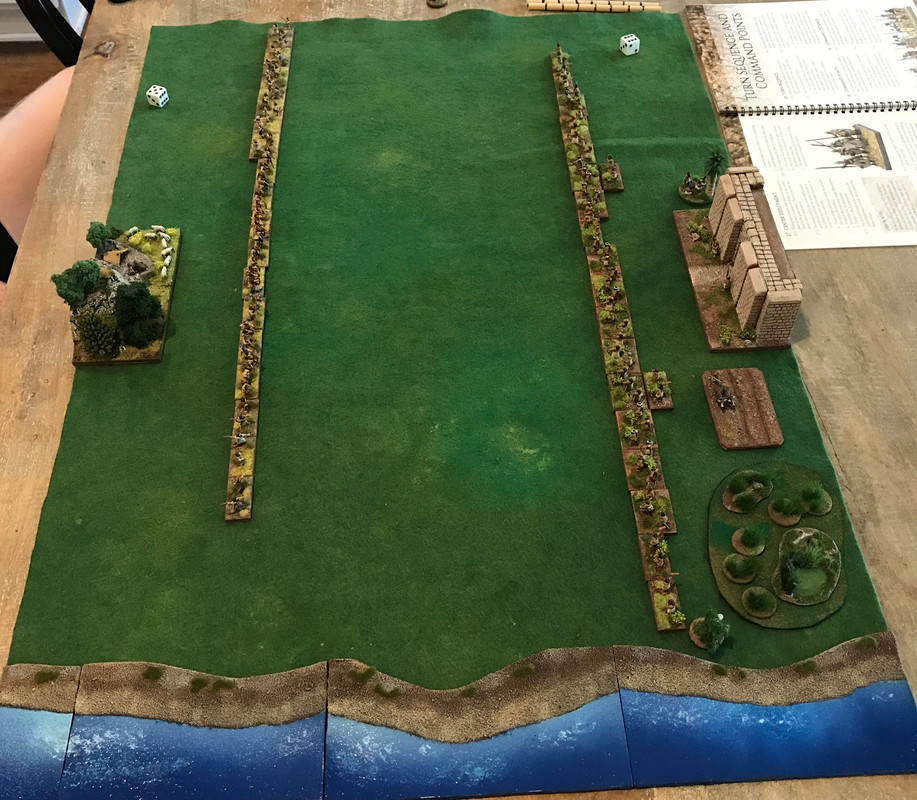 The youngest men, swift of foot, will rout the Amorites! 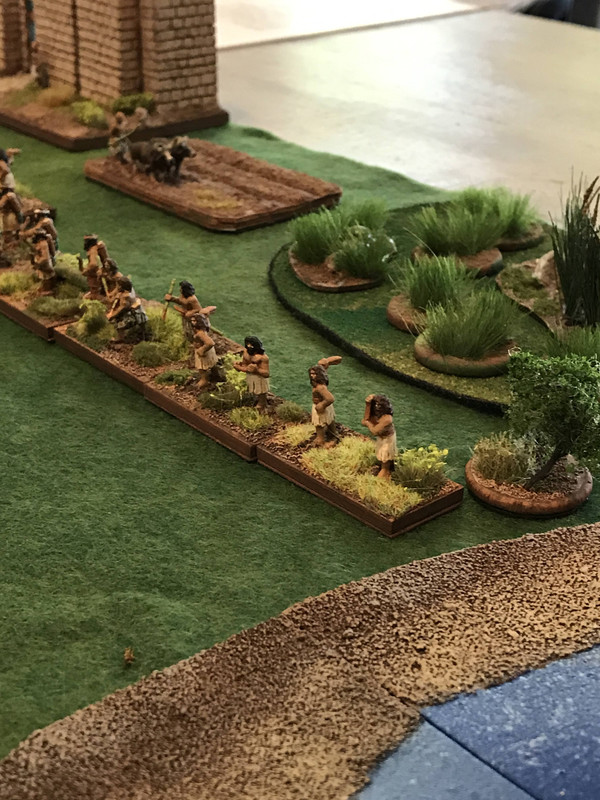 The Amorites fall under the sling stones of the people, blessed of Enlil, but the bow men in the center seek the shelter of the city gates after the first Amorite spear is thrown. 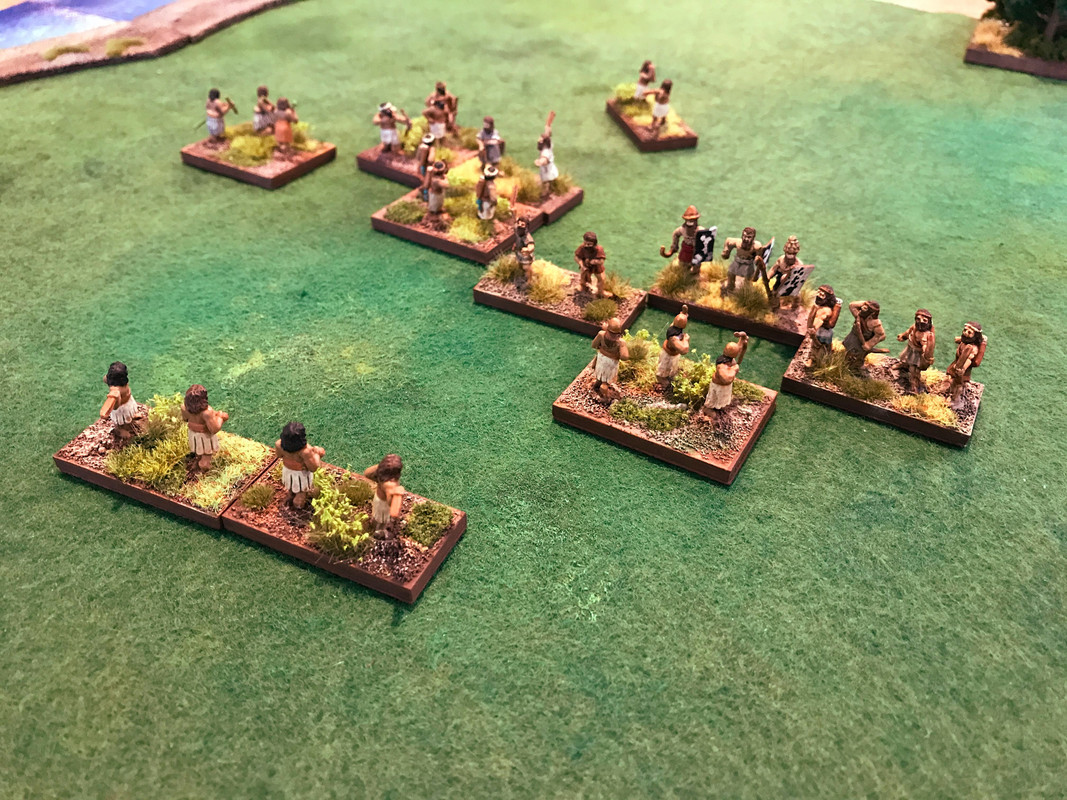