I am currently trying to work out a "Dark Elf and/or Undead " Triumph! army (48pt & 144pts) from what figures I have, and from my old DBM Fantasy List and Generic DBA Lists.

If anyone has any advice on this will appreciate. Have attached my 400pt List for anyone who can read 'DBM speak.'

I don't see much reference for Dark Elves here on the forum and wonder how relevant they still are. Guides to Lists on them etc, be welcomed.

My Fantasy knowledge is much lost after not playing or reading

for about 30yrs, and I need to get it back up to speed!

I'm not sure what "how relevant they still are" means. You can make up any army you like in Fantasy Triumph (FT). When I'm making up armies, I almost invariably base the classification of the troops on the figures I have.

Here's my Drow (Dark Elf) army, for example. These are based upon pre-painted plastic figs that were available cheaply in 2003-2007; you can still see them on ebay but they are more expensive now. They work great for using as loaner armies at conventions -- I am not strong enough to let random strangers mistreat the armies I paint myself, unless they sign a waiver and post a $500 bond. More for some armies. (Kidding/not kidding)

Most of the army is Raiders (Drow elite open order foot). 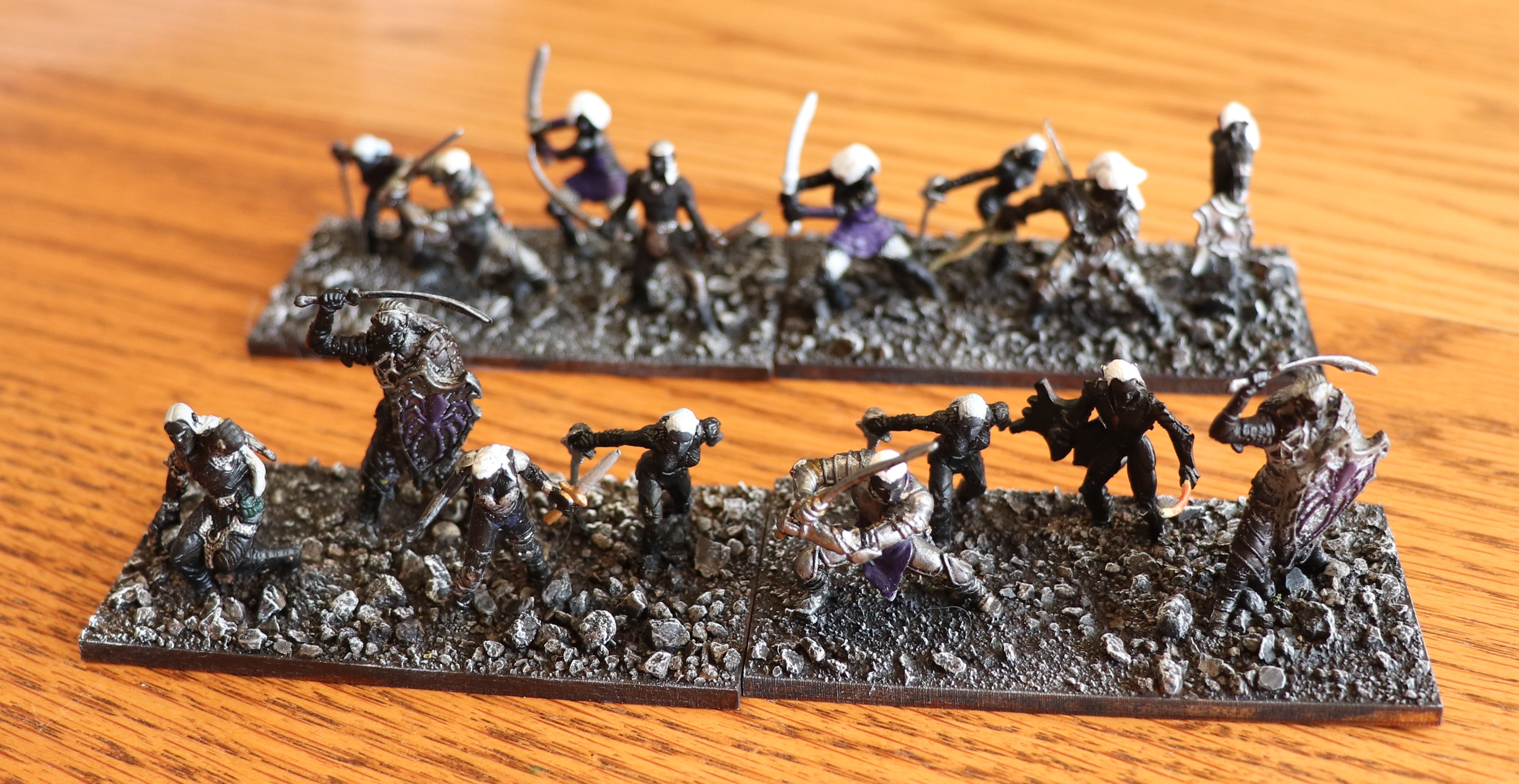 I've got one stand of Skirmishers -- the figures with small hand crossbows (ideal for skirmishers, to me) are hard to find. 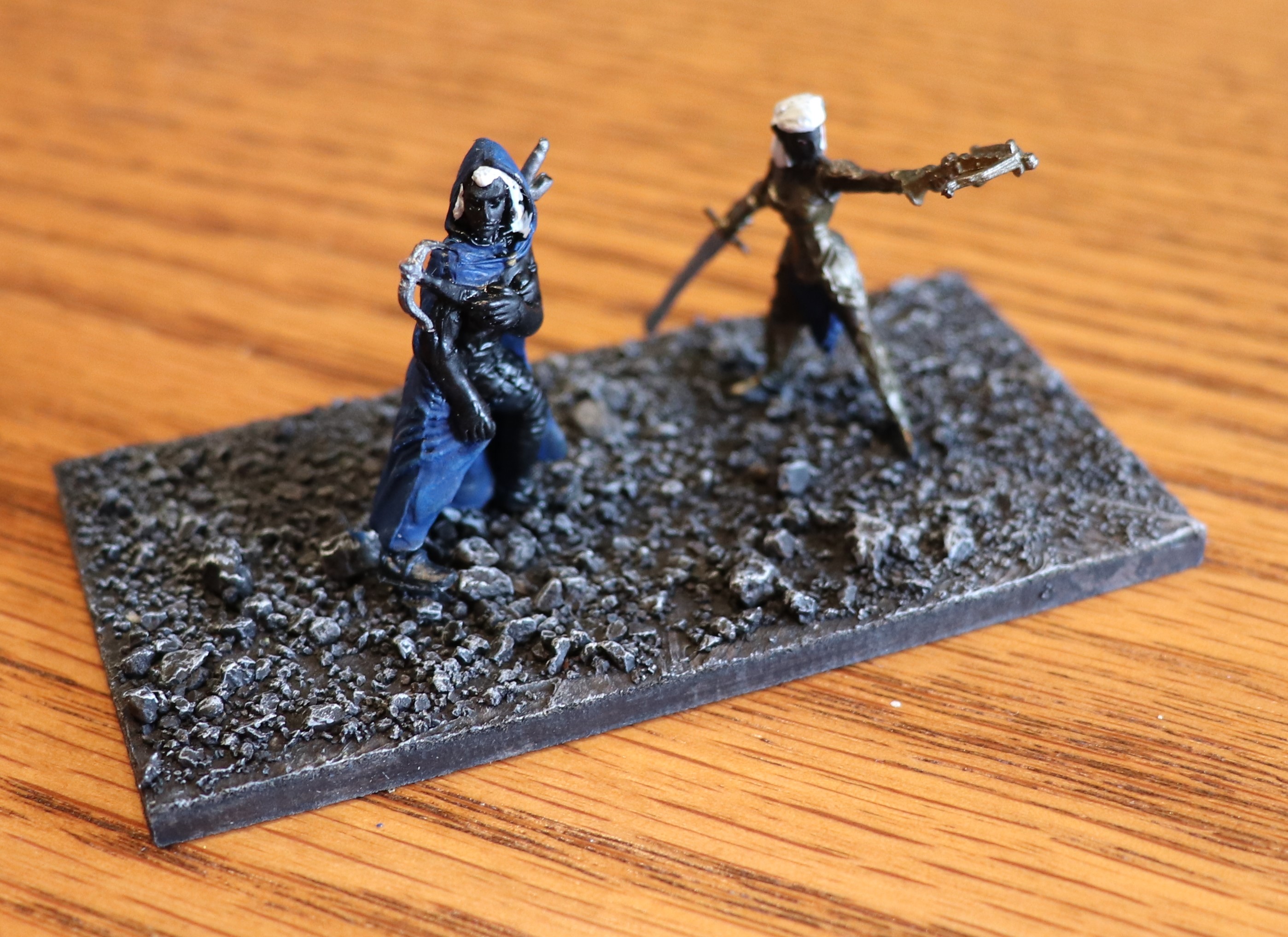 They've got some Driders (half drow, half spider) -- Javelin Cavalry is right for these guys. (girls, in many cases) Two Drider figures won't fit on an 80mm wide base, so to make the Drider less lonely I've added a single big spider on the base as well.

One stand of bow-equipped Drider is Elite Cavalry; it gets two escort big spiders rather than just one, to make it more clear to the opponent that this is a different type of Drider. 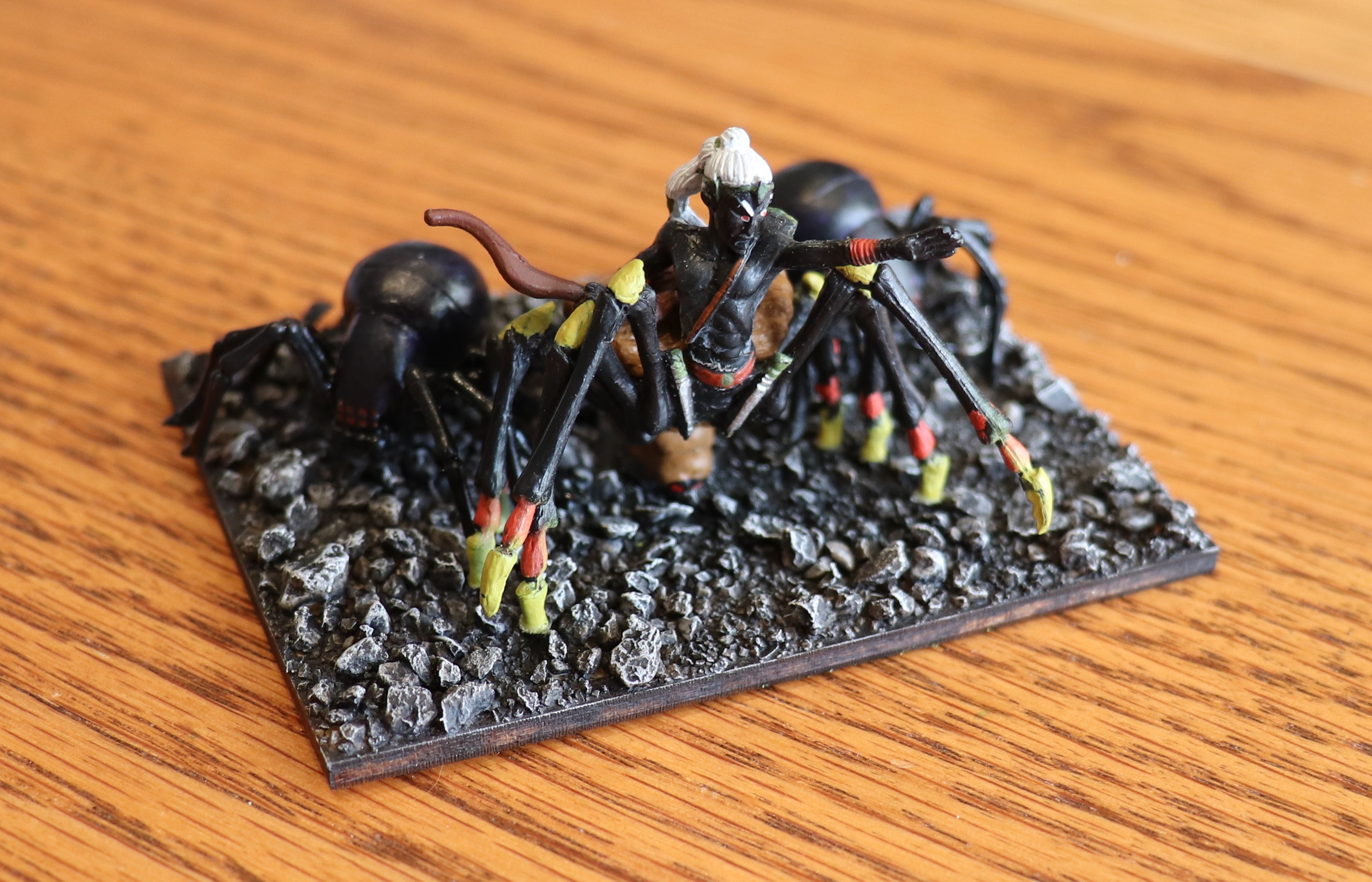 I've got one stand of Scorrow (half drow, half scorpion). It's nasty and fierce -- classed as a knight. 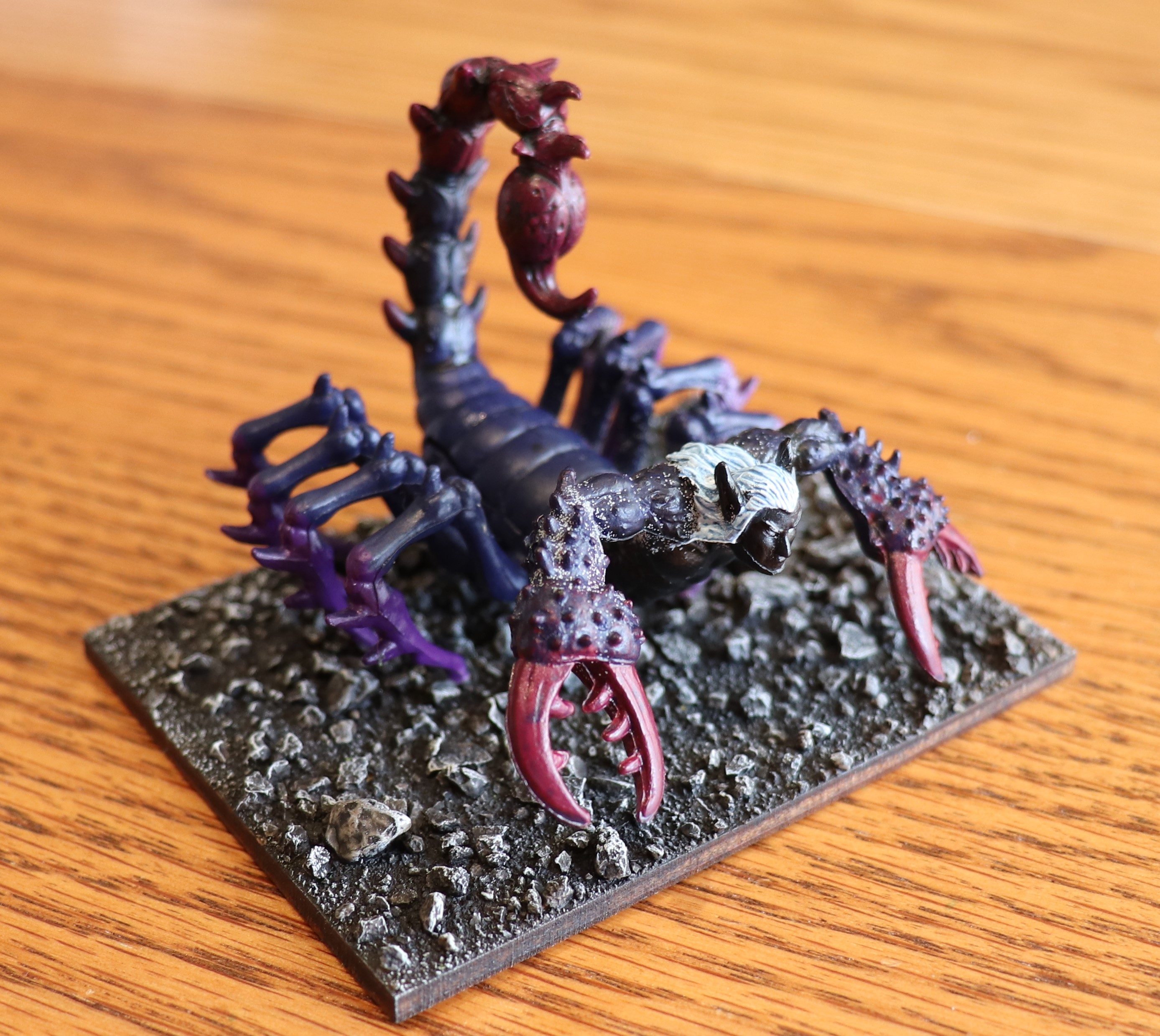 Spiders by themselves are Light Foot. That makes them fast and very effective in any type of difficult terrain -- as they should be. 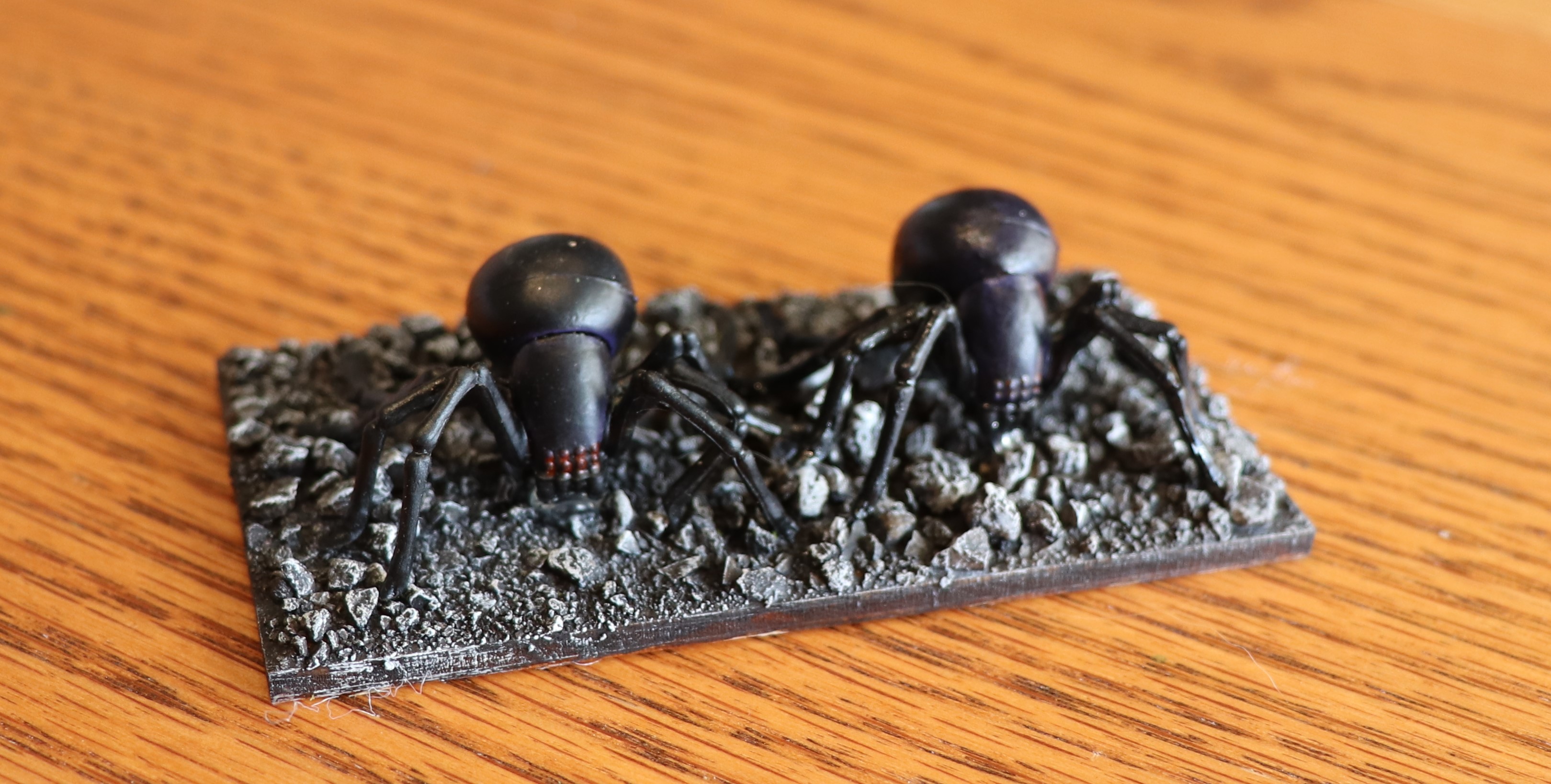 I've got about 80 points of these nasty denizens of the dark -- I haven't decided on a "typical" army makeup for them yet. Oh, I almost forgot: two Heroes. Both magic-users. 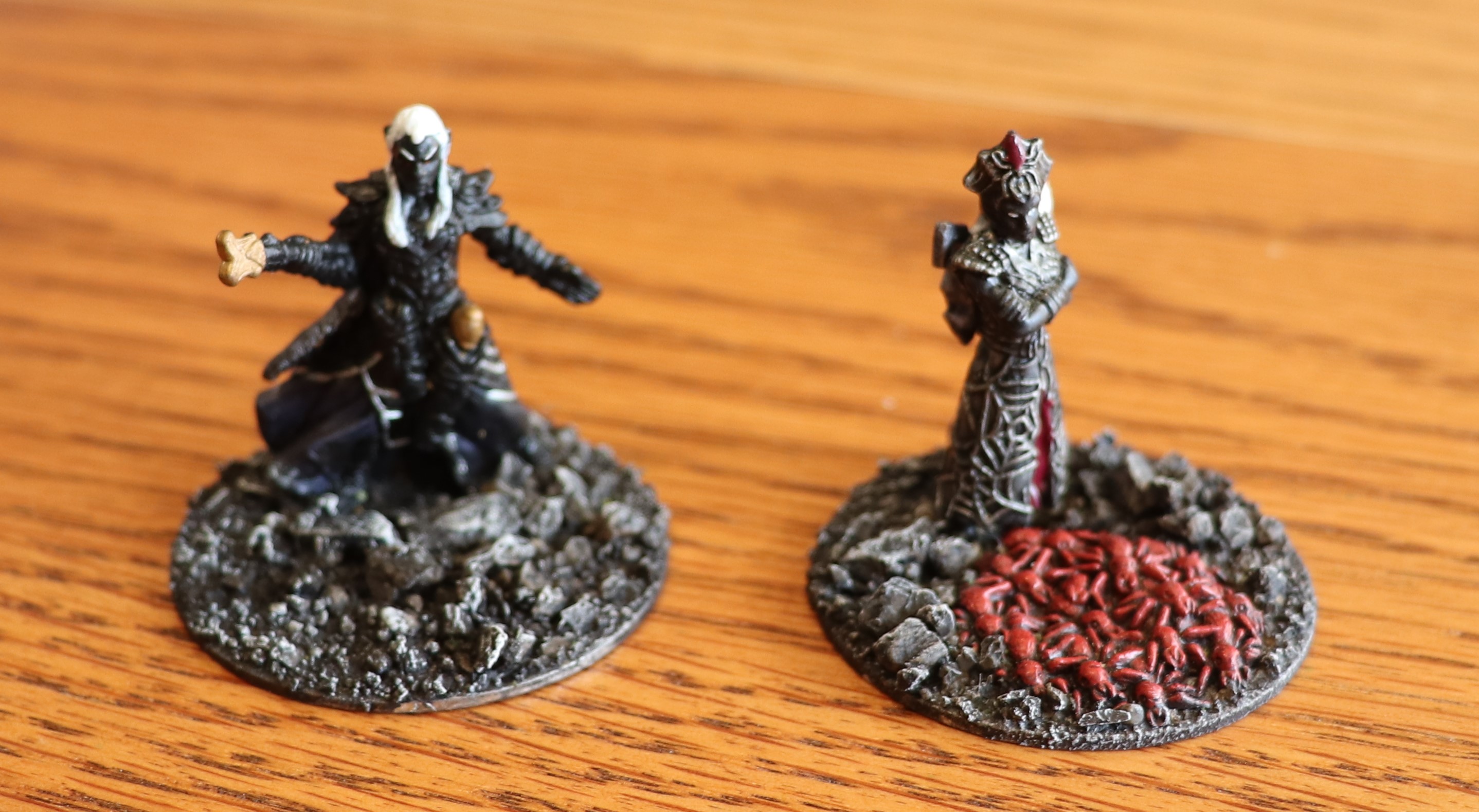 Most of those are the standard paint jobs for the DDM prepainted plastics. Some of the JavCav have had torso-swap surgeries (I forget which, now) to get more poses. Maybe the two-sword Drider was originally half a foot figure? Some of the other figs are repainted from other DDM elf figures. The clothing and armor of the Skirms was repainted. But mostly those are just the way they came -- it's a fun army, was easy for me to put together, and I'm willing to loan it to others at conventions. But as you can see, not high art, paint-wise.
DK
Top

By "how relevant" I was referring to my old DBM list and its relevance to Triumph! lists.

thanks for advice and pictures of Dark Elves.
In fact I love those 'plastics' of yours. The 'Dark look and their imaginative shapes etc are quite fitting for an army from the 'dark side.'
You've inspired me to replicate this on my 'Dark Elves' & 'Undead' somehow. As you can see in my photo further back, they're maybe a little too bright and colourful.

I feel the same re: carefully painted figures. Years back after being irritated by little kids at demos handling my figures as if they were toys, I replaced much of my Parthian cataphract lances with skin suture needles. (worked as technologist in the OR. Nurses would collect for me after use) That soon stopped!

Photo: Although looking quite scrappy now, I did spent a lot of time painting these, now (literally) 'ancient' figures. In a moment of boredom (on my daughter's advice) I placed that glitter on most of the scale armour. 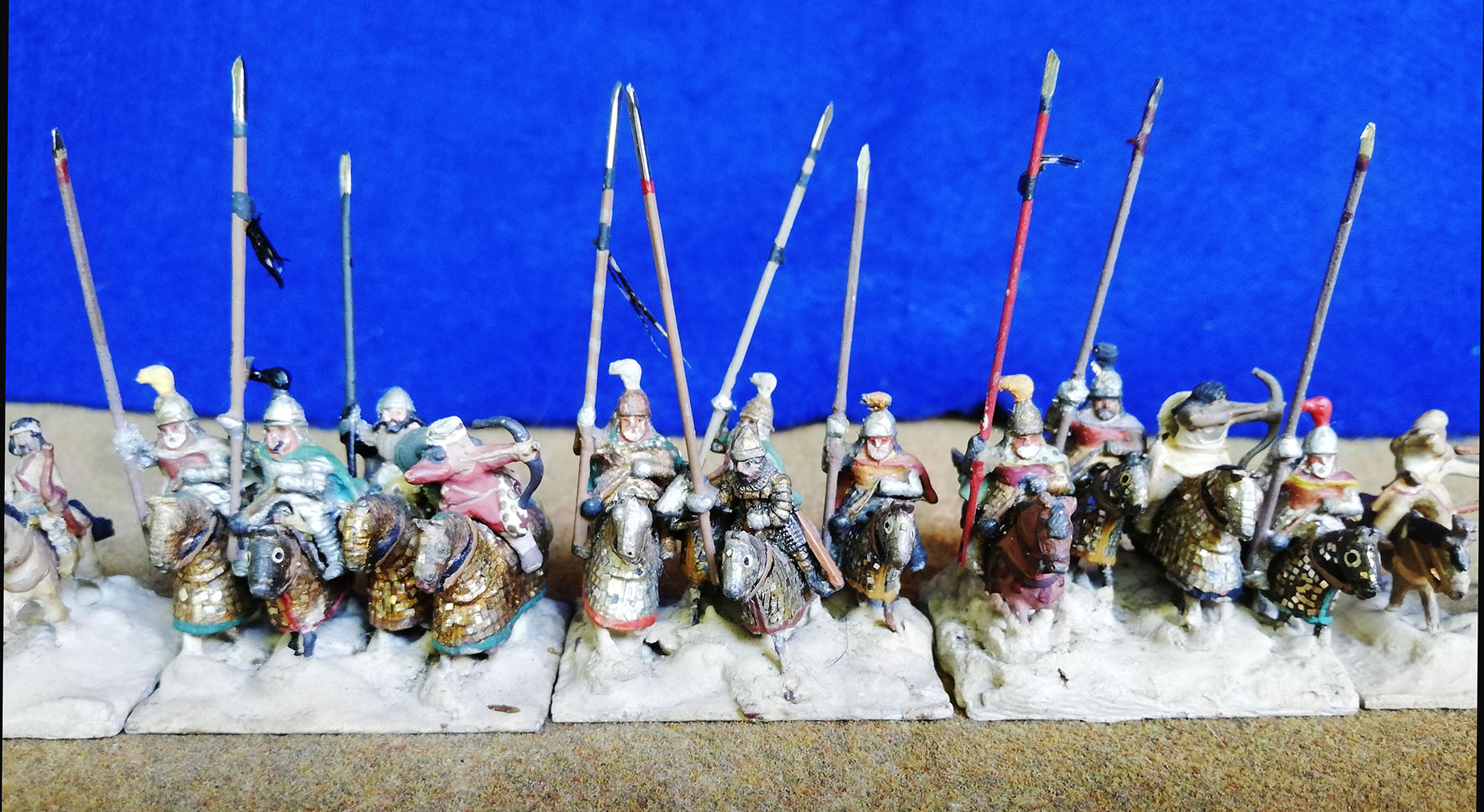 Remember that other people's lists are a reflection of their own vision. Some people want Gandalf to be a D&D Wizard with all sorts of spellblasts because that's what a Wizard does in D&D. In all the battle of the Pelennor Field he doesn't cast a single D&D style combat spell. So in MY vision, Gandalf is a Hero with Hearten and Negate Magic (to represent his powers against the demoralizing effect of the Nazgul -- mind blast and fear). YMMV -- there are too many frustrated D&D players for me to ever win that fight, but I'm certainly never going to abandon my vision simply because I'm outnumbered by people who don't read the source material (Tolkein).

I'm not sure who made up the DBM Fantasy lists, and there are troop types in Triumph that don't exist there (and vice versa -- DBM has hundreds of troop types, depending upon how you count them), so it would be a non-trivial exercise. IIRC, DBM Fantasy was an unofficial thing that arose in the decade before the DBM / DBMM split, some time in the 2000s? Some of the players who were active back then like Luke Ueda-Sarson were very thorough and did a good job; others were ... not. In the same way that some people commenting on army lists back then (like Duncan Head) had vast knowledge of ancient and medieval combat; and others ... not.
DK
Top

I'm not sure where I originally worked those Lists out from. Possibly DBF (a rule set I can no longer find in my collection) and/or HOTT, and also Luke Ueda-Sarson which I see I've still got a List url for.. I've been out of Fantasy for so long it is almost like beginning from scratch again.

I am probably one of those guilty of not reading enough Tolkien. Apart from wading through LOR in my teens, (long long ago!), watching the movie, and having the Hobbit as a graphic novel, I've done nothing more. I do have a few E-books such as "The Burning shore by Earl. (still to read) and a mix of stuff off that Warhammer Project site. Plus there is also what influence TWWH has.

Am happy to mix and match. It is Fantasy after all. (I think the Base rules/Battlecards combination are key to balancing it all out.
When I get down to playtesting, I shall maybe start with some Fantasy vs Human matchups, which should be interesting.
Top

If anyone has any advice on this will appreciate. Have attached my 400pt List for anyone who can read 'DBM speak.'

I've never played DBM, but I can approximate a translation for you. In the Undead army there is more I don't know -- what's a Dr(F), Dr(O),WW(I)? Ax(I) and Ps(I) are probably better as Rabble; Trolls and Minotaurs are likely Behemoths (Elephant). Zombies rated as Wb(F) in DBM should probably be straight up Warband in Triumph.
DK
Top

Dr(F), Dr(O), I must admit I not sure but possibly Dragon (not your usual DBM type)
WW(I) are War Wagons Inferior. Ax(I) are Auxilia Inferior (maybe Light Troops) and Ps(I) are Psiloi Inferior. (usually Skirmishers in DBM) Inferior opponents get a +1 if they get equal or greater their score vs Inferior.
Darkriders are skeletons, riding skeletal horses. 2 on a base. Probably make Jav Cav. (To left of my photo further back,)
Thanks David for taking a look through the List. Your explanations give me a much clearer way forward. Hopefully post up photo soon.
Top

skc wrote: ↑
Wed Sep 08, 2021 11:04 am
Dr(F), Dr(O), I must admit I not sure but possibly Dragon (not your usual DBM type)
WW(I) are War Wagons Inferior. Ax(I) are Auxilia Inferior (maybe Light Troops) and Ps(I) are Psiloi Inferior. (usually Skirmishers in DBM) Inferior opponents get a +1 if they get equal or greater their score vs Inferior.
Darkriders are skeletons, riding skeletal horses. 2 on a base. Probably make Jav Cav. (To left of my photo further back,)

Ax(I) and Ps(I) I know, and those are almost always best as Rabble.

WWg(I) I don't -- by which I mean, DBM and DBMM had all sorts of special rules that really changed how things worked. For example, WWG(I) might not shoot (I don't recall). Things that are War Wagons in DBM/MM are represented in multiple ways in Triumph -- sometimes as War Wagons, sometimes as Prepared Defenses (Battle Card), sometimes as other battle cards (Standard Wagons, spiked carts / Plaustrella / Rathamasula).

I never looked at the DBM Fantasy rules, and since DBM has been dead for more than a decade (And Fantasy DBM never was very successful) I likely never will, so how it represented Dragon Ordinary or Dragon Fast doesn't really matter. For Fantasy Triumph, depends how big the dragon is and what powers you want to give it. Use my earlier comment as a starting point.

Looks like your Darkriders are good for JavCav.
DK
Top

My WWg could be that apparition on the left. (scratch built out of Matchbox & Lego etc) The Dragon being 25mm is HUGE. (Talked my wife into buying it as an ornament, but....

Should look good towering above the 15mm. May have to designate a 40mm area on the oversize base though. Also 25mm are the Minatour and Orc on the right. Anyway if I mix in some 25mm should add to the effect. (Fantasy after all!)
DBM is still played here at various clubs including ours. I tried DBMM but it was even more complicated, and never caught on.
Top
Post Reply
14 posts