skc wrote: ↑
Sun Sep 12, 2021 11:51 am
This has come out following my 1st Playtest, (Dark Elves vs Marian Rome), and with my FB conversation with Rod. Thought maybe also place here for discussion.

Interesting take. I'm not sure I agree, but always glad to hear feedback.

An earlier version had Deadly be a little cheaper, but our assessment was that 1 pt was way too cheap for that benefit. Note that the +1 on combat applies if beaten, if tied, if it wins, against foot, and against mounted. In general, a Light Foot with Deadly is much more effective than Light Foot with Ranged, for example. Situationally, of course -- sometimes a Light Foot with Ranged standing half-in difficult terrain is almost like having an Archer. But on the other hand, if you are fighting anything but Knights, a Light Foot with Deadly doesn't have to hide in difficult terrain against Mounted at all. Further, consider the costs for Hearten, Prowess, etc. -- if the cost for Deadly is moved, all the others need to move as well.

Or even worse -- take a Knight with Deadly, and slaughter almost all foot, and be much more resistant to the normal weaknesses (getting overlapped and doubled, or getting shattered by JavCav).

We'll wait for more feedback, but at this point the 2pt cost for Deadly is fairly solid, and we're happy with the +1 to all close combat mechanism.

Consider the command point cost for the actions, and that it has to be across two turns (you cannot go Up and come Down on the same turn). Command point cost is a serious burden on Up, and Up becomes less and less useful as the game goes on and casualties accrue -- I've seen players lose a game by going Up and late in the game and then finding that the temporary "units lost" points for units in Up has broken their army.
DK
Top

Thanks David. Does clarify it somewhat. I leave it up to you guys with your fingers more into play experience and the 'ins and outs' of the rules than I, to decide. (BTW: my Dark Elves lost 20:4 to Marian Rome! The 'Up' was brilliant in getting my Witches to save the isolated camp, but his double envelopment (which I had taught him previous game;) of Elite Foot into the flanks my 'Slow' Heavy Foot & Lizards sealed my fate.
Top

skc wrote: ↑
Sun Sep 12, 2021 2:53 pm
Thanks David. Does clarify it somewhat. I leave it up to you guys with your fingers more into play experience and the 'ins and outs' of the rules than I, to decide. (BTW: my Dark Elves lost 20:4 to Marian Rome! The 'Up' was brilliant in getting my Witches to save the isolated camp, but his double envelopment (which I had taught him previous game;) of Elite Foot into the flanks my 'Slow' Heavy Foot & Lizards sealed my fate.

Who had Deadly, Slow, Up? Were his Marian Romans straight historical list?
DK
Top

Here's da List I used. (I see I miscalculated the Jav Cav points.) More info on game after List. 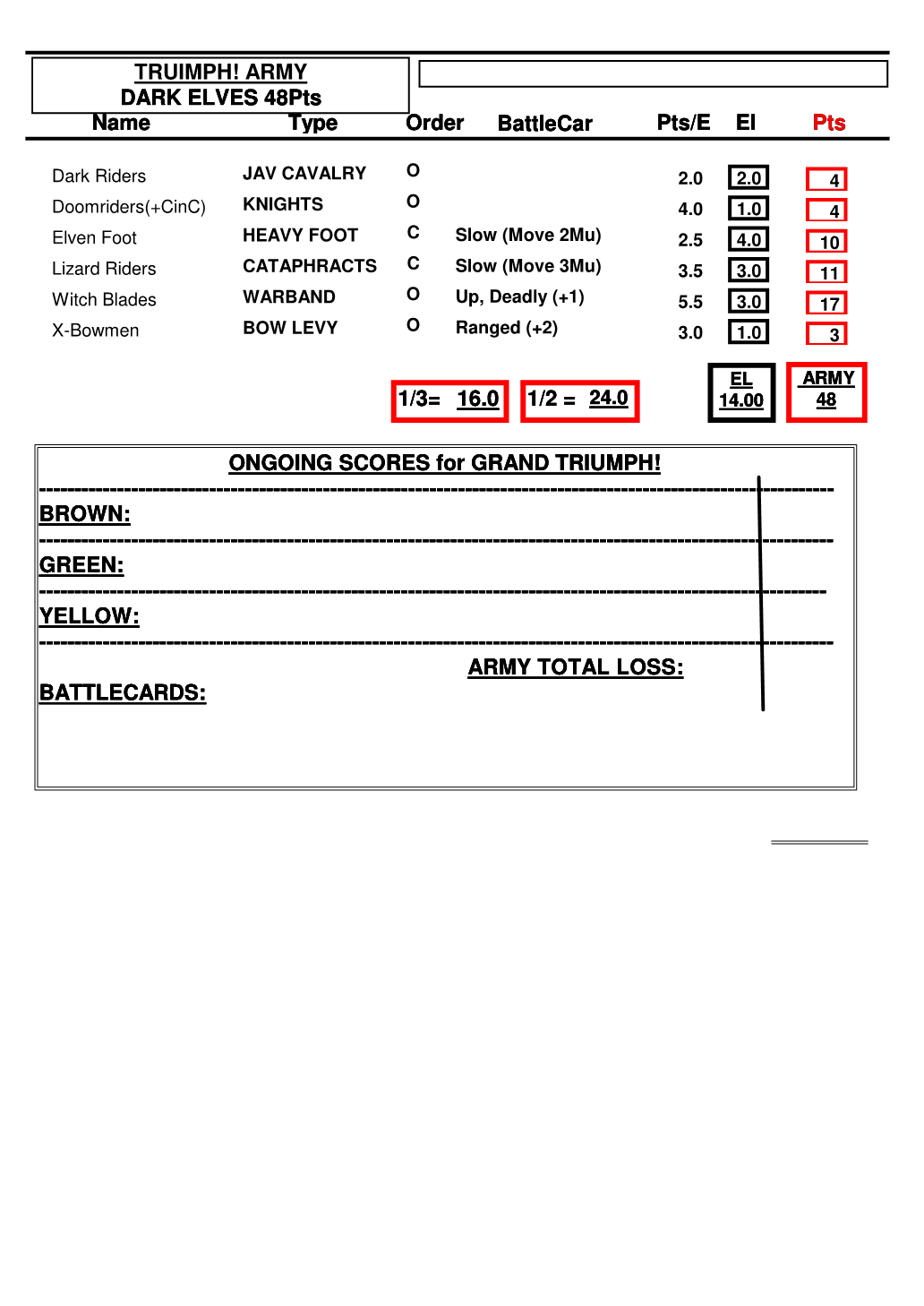 Marians were a straight historical list. (in fact my own figures, I sold him)
I expected to lose. Was not a serious Ladder game and I didn't try very hard. Besides was playing about with the Fantasy side, to concentrate much. (Newcomer. He needs to win a few;)

Have since changed List for now. Corrected Jav Cav, took Deadly off the Witches, (a waste when they're off table much of the time)
and added Spellblast to the Knights.
Top

Looks like you reversed the Ranged and Deadly costs -- Deadly is +2, Ranged is +1. Although you calculated the values with the correct numbers (not the numbers in your list).

(and Triumph is misspelled in the title -- which matters not at all, but it makes me twitchy, so I mention it

Nope, they're not reversed. The +1 & +2 under the Battlecard column are just to remind me what their Combat Factors are.

Yes the misspell of Triumph goes back to years of mental block I've had re: the spelling of certain words. (probably aggravated by now having had 22 General anaesthetics!): Must say I didn't notice until you mentioned. Will dig in the database and change it.
I used to get twitchy over American English and other changes of spelling, but now I really don't care, especially when one wades through some of the junk on Facebook, one learns to ignore. (as long as it is understandable)
While we're here. Any idea of a good figure supplier for 'Morathi' 15 or 25mm? I see Plastic 28mm is become fashionable. Even that. (She can shapeshift and tower above the 15mm;) 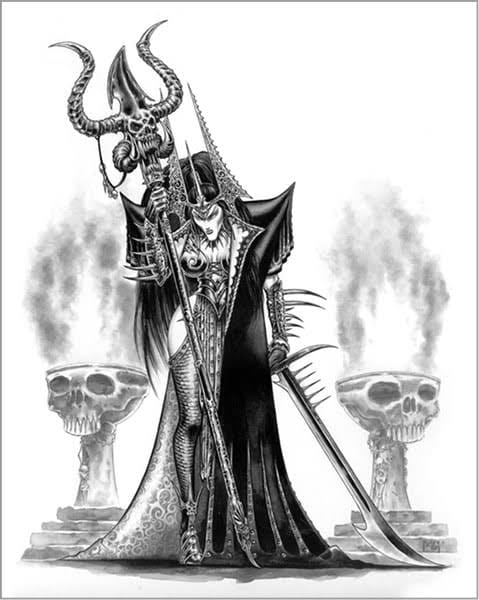 Here is my latest Dark Elf List. (work in progress, esp when comes to 144pts!) 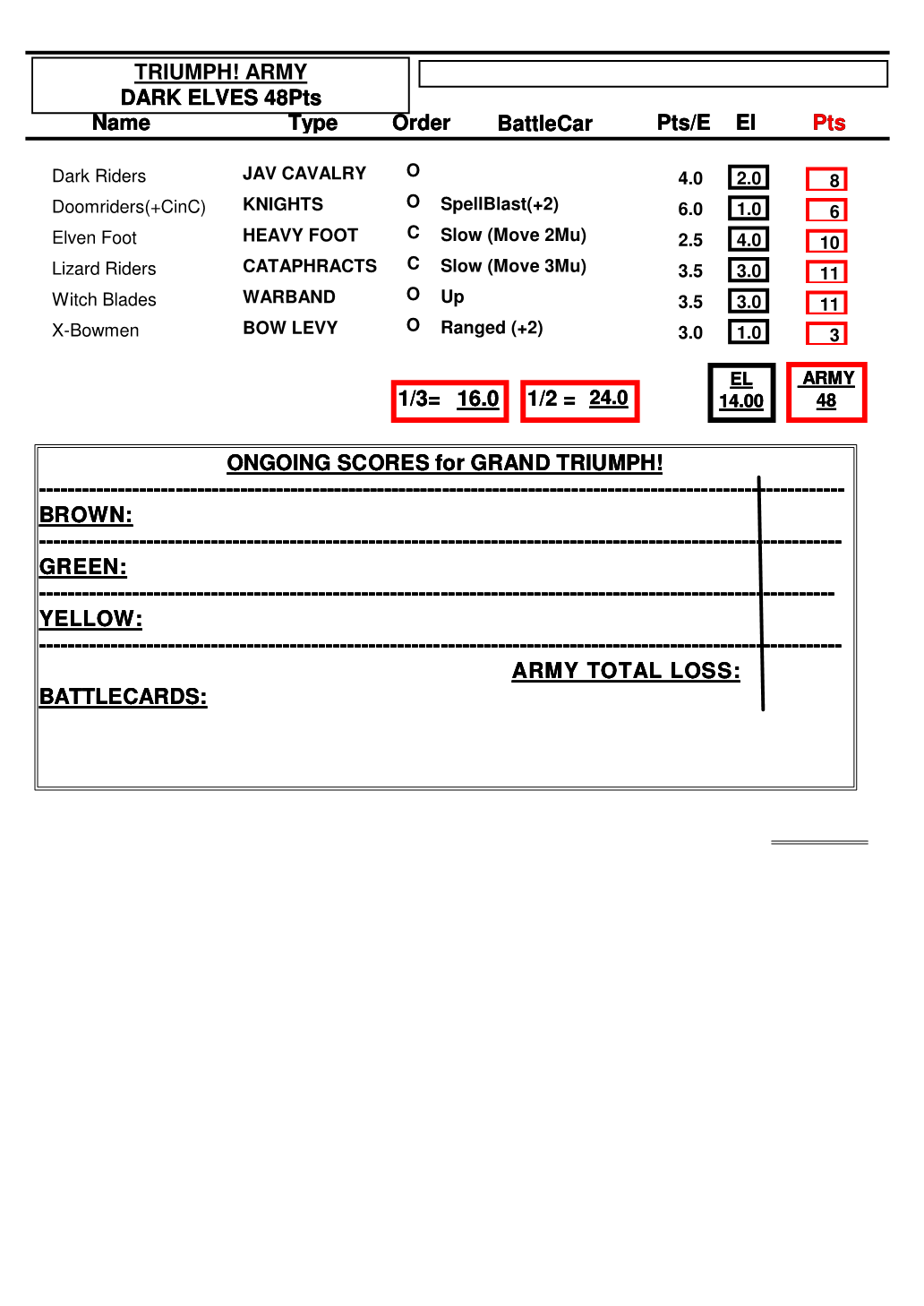 She looks very Warhammer-esque; I'd go check their Dark Elves (whatever they call them) first. In 15mm there are a couple of suppliers doing fantasy, but all my fantasy are 25mm, so I'm not as conversant with those options. If Chris B. sees this note, he haunts the 15mm fantasy zone and might know better.
DK
Top

I don't think they have that one specifically though.
Top

I don't think they have that one specifically though.

Nice. The Dark Elf "personalities" pack looks like it has some that are pretty good for that role.
DK
Top

Most of my stuff comes from Demonworld too but maybe also have a look at Splintered Light Miniatures:
http://www.splinteredlightminis.com/darkelves.html
Top
Post Reply
22 posts