Special thanks to Andreas for playtesting via Zoom in Germany!

The Eleven army defeated the Orcs after a very tough battle in the marsh technically they just hacked their way through a bunch of Goblins, the Orcs and the Troll got very little action until the very end. Andreas made very good use of his aerial units pestering the weaker goblin units from the rear after taking out the orc archers which threatened them. 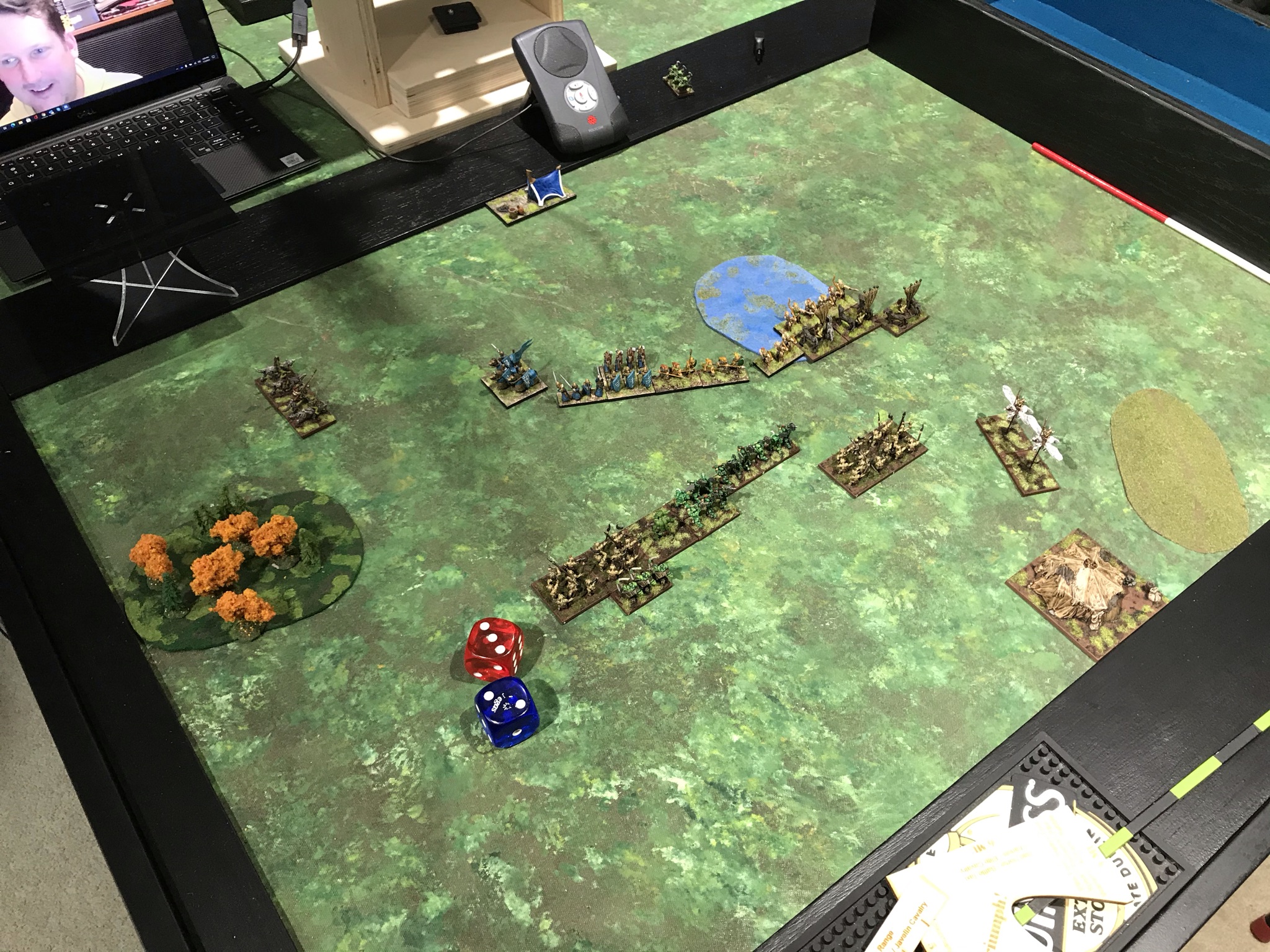 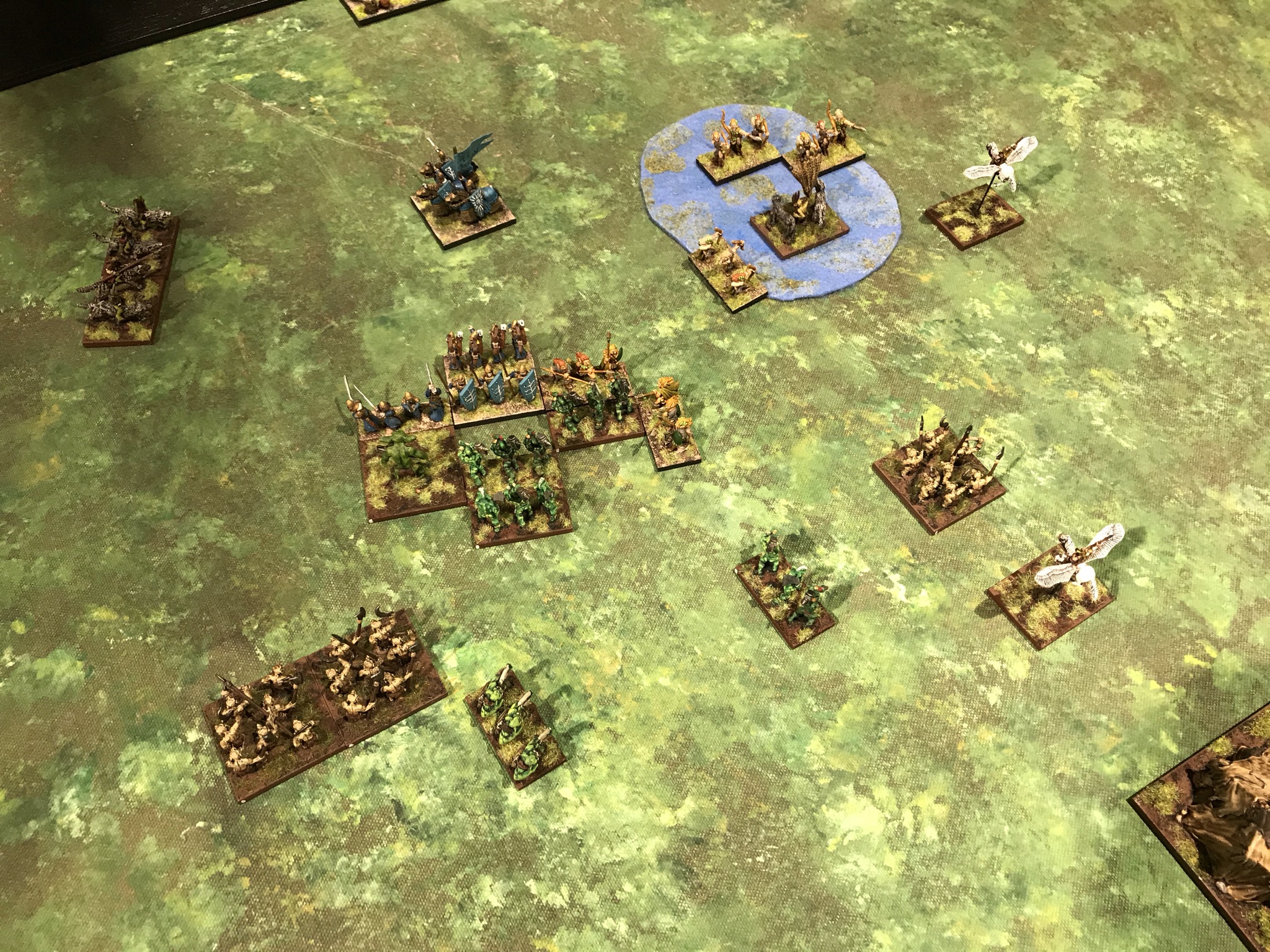 In the end too many of the "expendable" Goblins were lost and it would be time for the Orcs to withdraw. At least they killed a few Elves (one unit of deadly Pavise killed by the Orc General) before their retreat. 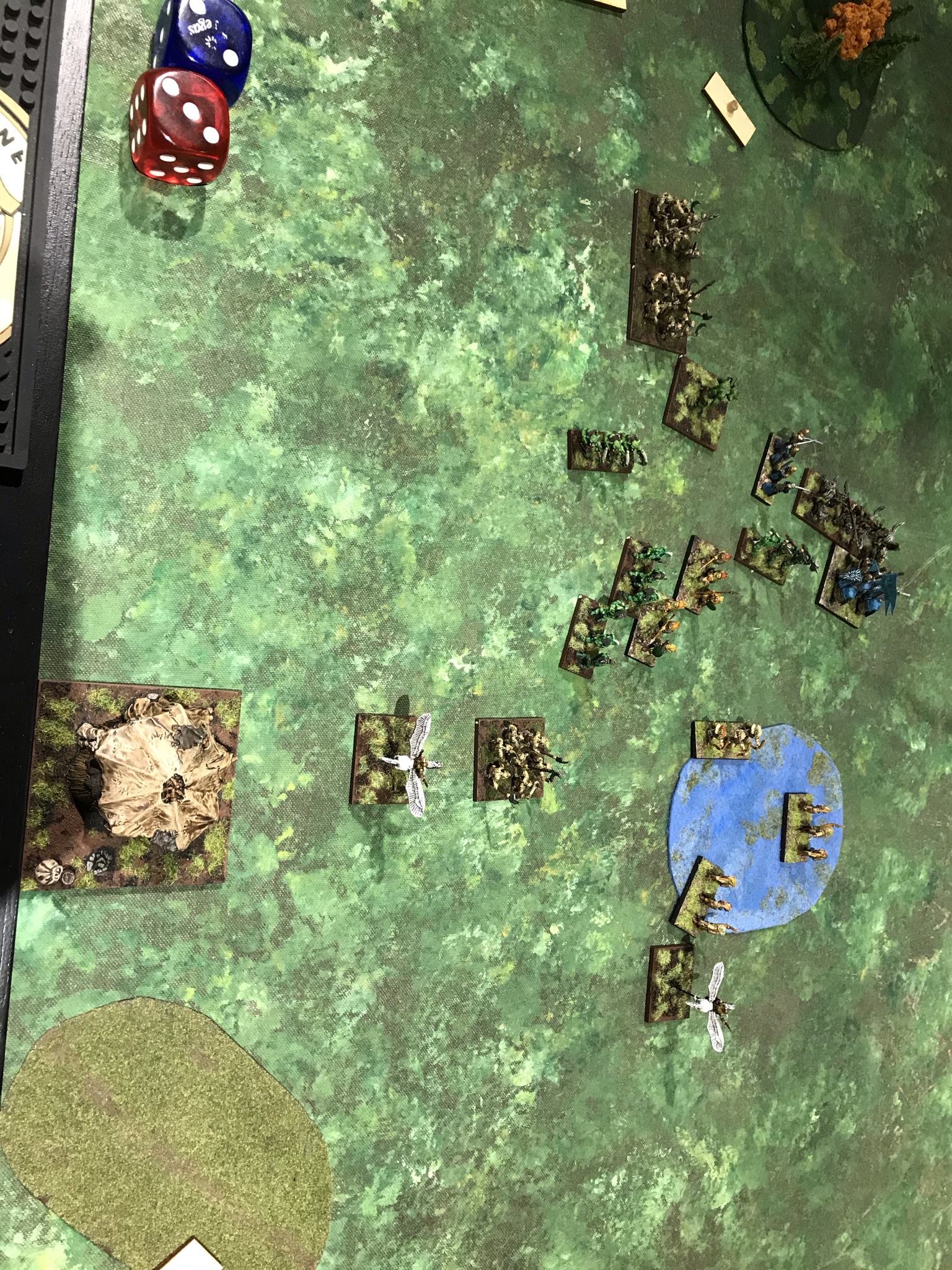 Exited to see progress in this area - seems that 2021 could get very interesting when it comes to Triumph!

And: absolutely great to see that there are more players based in Germany.
Maybe after this Covid-thing there will be possibilities to start something here...

@Rod: thanks for sharing and for moving forward with the fantasy version!
@Andreas: where do you live in Germany?

P.S.: how did you play the troll? I am also currently in the process of rebasing my orcs, so would be very interesting

Brummbar,
If you are interested in a play test session, please let me know I can even try to arrange a match between you and Andreas, or you can try it directly with me or some of the other players. I have ben experimenting with my Zoom setup and I think it works pretty well now so we can play a game. Apparently there are people playing in Germany and Switzerland. So I am hoping to get more of you guys in touch with each other.

I am not sure if Andreas is on the forum, but he is on the Triumph FB page.

The troll was what I would call a relatively normal or low level troll so he was fielded as just an elephant with armor. Armor is an ability that makes the troll harder to shoot by giving the shooter a -1 to their die roll.

Fantasy Battle Cards in play:
Armor +0.5 points -1 to shoot the target
Deadly +1 point +1 in close combat
Fast +0.5 point increased movement
Slow - 0.5 point decreased movement
Fierce -0.5 point, always follows up in combat
Flying +2 points, increases speed, allows units to go Up (off board movement), lets them ignore many of the other troops ZOCs, but makes them more vulnerable to Archers and provides some command control issues.
Terrain Affinity (Woodland Creatures) +0.5 The woods are treated like open terrain for group movement and combat purposes.

Here is the full OOB, we have played this match up three times with two victories for the elves, one for the orc army.

super - thanks for sharing!!!
Personally I don't like Facebook, so with me it is the other way round: Forum yes, FB no

I would really like to get some more games going during these strange times - and would also love to see your Zoom setup as it is now, as had plans to do something like that for some of my friends.
Top

PM sent on this forum.

I can show you the setup and even let you try the same game, just need to schedule it.
Top

Thanks guys for the nice pictures and interesting Zoom playtesting.
I'm still in the process of revamping my old DBM (15mm) & Warhammer (25mm) Fantasy to Triumph and am beginning to find these forums a wealth of info on how I can do all this.
I've now got good idea for Trolls, Orcs, Elves.

Regarding Dark Elves, I still trying to work them out. Would they be much the same as Elves but look different with a few 'nasties' attached?

I have a number of 25mm Dragon, Dwarves, Orcs, Minitour, Troll etc. While these look good towering over the 15mm individually as say Trolls, Dragons, etc I'm not sure if/where they could be fitted into the 15mm groups. (especially the Dwarf 25mm which I have quite a few of)

Any ideas on this

Regarding Dark Elves, I still trying to work them out. Would they be much the same as Elves but look different with a few 'nasties' attached?

I have a number of 25mm Dragon, Dwarves, Orcs, Minitour, Troll etc. While these look good towering over the 15mm individually as say Trolls, Dragons, etc I'm not sure if/where they could be fitted into the 15mm groups. (especially the Dwarf 25mm which I have quite a few of)

Any ideas on this

My Drow are based on a core of Raiders representing normal Drow foot, with some Spiders (Light Foot), Driders (JavCav, mostly, although I have one bow-armed Elite Cav Drow and one Knight / Scorrow). I haven't thought about what sort of abilities I would give the Heroes yet -- certainly one of Mindblast or Spellblast. Spellblast could be fun representing waves of summoned spiders and nasties; Mindblast could be fear and confusion and doubt and illusions.

I believe DS's Drow army has some drow riding giant two-legged lizard mounts -- those could be JavCav if you envision them fighting in a fast loosy-goosy style, or Knights if you see them more as charge screaming bloody murder types.

My Wood Elves (Tolkein-style) are mostly Archers with Fast (4mu) and some Light Spear (4mu). They have one or two stands of Royal Guard (armored Elves) who are Spear with Deadly or Archers with Hearten and Marksman, depending upon whether they are armored archers or armored spearmen. Some Skirmishers as well. Sometimes one stand of Eagles (JavCav with Flying and Delayed Entry).

The Trolls in my Tolkein-style Mordor army are rated as Elephants (Behemoths by another name). Works perfectly -- powerful, difficult to command, awkward, tough.

Dragons it depends upon size -- medium-sized dragons could be Knights with Flying and Ranged Attack, sometimes with Delayed Entry. Huge dragons could be Elephants (Behemoths) with Flying and Major Ranged Attack, with Delayed Entry and Brittle (if they take a scratch they get the hell out of Dodge -- they are not inclined to risk their long-lived skins for some irrelevant battle between Humans and their myriad little squabbles).

These are just suggestions.
DK
Top

Many thanks David for your ongoing advice. All this is most helpful in the revamping of my old Fantasy stuff. (now to find the TIME to do it all!)

BTW: We were watching your video this morning on Flank fighting. Clear and too the point. Thank you.
I notice on the DBA page there are often rule queries trying to unravel the "Barkerese" in what should be a simple straightforward set! (but that's another story I guess.)
Top

skc wrote: ↑
Tue Sep 07, 2021 9:26 am
I notice on the DBA page there are often rule queries trying to unravel the "Barkerese" in what should be a simple straightforward set! (but that's another story I guess.)

Phil made clear long ago that he wasn't interested in clarifying his rules -- neither in changing his opaque writing style nor in supporting his rules by resolving questions from users. That's been true since I assisted him with editing his army lists in the transition to DBA 2.0, back around the turn of the millennium more than 20 years ago, and I'm sure it hasn't changed. I wish the DBA players all the best, but Phil was conservative that way when he was in his 70s, and he must be 90 or more now.

But we prefer to talk about Triumph here.
DK
Top

This has come out following my 1st Playtest, (Dark Elves vs Marian Rome), and with my FB conversation with Rod. Thought maybe also place here for discussion.

Re. Deadly.
The +2 points penalty to just get +1 on combat seems a bit steep? (yet 'Ranged' only needs +1 to get +2 on even non shooting types.)
Maybe give a -1 to enemy instead? (and even that and the + 1 ?) Thoughts?
Re: Up: 1/2pt/Stand, seems too cheap, The ability to pop up say behind the enemy just beyond 4mu is hugely beneficial.
Also used Slow which seems about right. Still to look at some others such as Hearten & Prowess.