Are Battlecards available in card form, similar to the Terrain Card set one can purchase?
I like the idea of being able to purchase and have them for each army I have. (or even printable with color illustration etc.)
Looked on MGC, Meshwesh & Creep Scale, Wargames Vault but don't see them.
Top

They do not exist. Yet.

The battle card rules are only now being finalized (I'm hoping today or tomorrow). Then we are sending them to our favorite edit/format guy, who did the print rules edit/formating for us. Within a month or two that will probably be finished.

Our artist is working on artwork for (if I recall correctly) cards 10-14 or so. Once we have enough artwork we will insert it into the battle card rules; with any luck that will also be done in a month or so. She's also going to be doing up the cover art for the battle card rulebook.

That will give us a final PDF for the battle card rules, which will then be made available through the usual channels. So look for that maybe early summer. At that time we will also update Meshwesh so that the final text is up there when you click on a particular battle card in the database.

It will take more time -- perhaps another few months, perhaps a bit more -- for our artist to finish the artwork for ALL the battle cards. At that point we will be attempting the task of formatting the battle card rules for physical cards (probably on a large card model -- tarot deck sized). Each battle card will have its own art. This step is complex -- some battle cards are simple, some have too much text for it all to be put on a card. Which means a cogent summary of the rule must be on each battle card, and boiling down a five-paragraph rule into two or three sentences of cogent summary isn't going to be easy.

Only then will we be going to print with the physical battle cards. Not sure of the price -- nothing unreasonable, but we will need to defray the cost of the artwork, and 25 original pieces (24 battle cards and the cover) isn't cheap. Maybe $15? It's going to depend. Our priority is always to put out high-quality material, which means we don't want it to look like crap.

So maybe Christmas for physical battle cards? That's the earliest, I'd guess. This is the time of Covid, and it has created numerous complications and delays -- our artist moved back from Italy to Poland, for example, and was unavailable for many months this last fall. If not Christmas, then early 2022.

They will be coming, and they will be very nice, but they are still a ways off.
DK
Top

I know, you can't rush art! Takes time. Look forward to seeing what they're eventually like.
Maybe to keep costs down, have the option of being able to just purchase individual cards, for whatever army they have.
In the meanwhile I've made my own rough version which I added to the database, to printout on the back of the particular army list they relate to.

BTW: After having the rules for about 6mths, finally got some Triumph! learning games at club tomorrow. May do a write up for FBook etc.
Top

skc wrote: ↑
Fri Mar 05, 2021 3:35 pm
Maybe to keep costs down, have the option of being able to just purchase individual cards, for whatever army they have.

That keeps your costs down, it doesn't keep our costs down. Our costs are constant and based upon the artwork. Printing one card at a time would be much more expensive (for us and for players) than printing by decks.
DK
Top

I love this idea of Battle Cards to really add flavor from one army to another.

One Question: Will there be a method for players to create their own scenario specific cards?
I'm thinking if we wanted to model stuff like very deep units, like the Thebans or Philip II's Pikes.
The game might be too large scale to model this specific example, but just thinking of other ideas.
Top

I already do this to adjust for specific scenarios.

Hastings, the Close Order Saxon foot cannot go back up the hill with out spending +1 command PIP.

Hattin, the Archers are exhausted and out of arrows, so no ranged fire and they cost 3, but in close combat have the same stats.

These are not official rules but scenario rules / Battle Cards. We encourage players to play straight up and get familiar with the game before trying to many modifications. It takes very little modification usually to create these scenario specific effects, in most cases nothing at all. I do not use any mods to recreate the Battle of Marathon for example.
Top

I saw the photograph of the setup.
Were you able to film the battle? Would be fascinating.
Top

Thanks for all the feedback guys.
BTW: After having the Rules for about 6mths with some easing of Covid, I'm finally off today to play my first Triumph! game! (& 3rd Tabletop in a year)
My opponent is a brilliant strategist, rules writer and historian, and has just published his book "Ancient Battle Formations." Will be his first Triumph! as well so am interested to learn his impressions.
Attached: 2x 144pt Armies, raring to go! 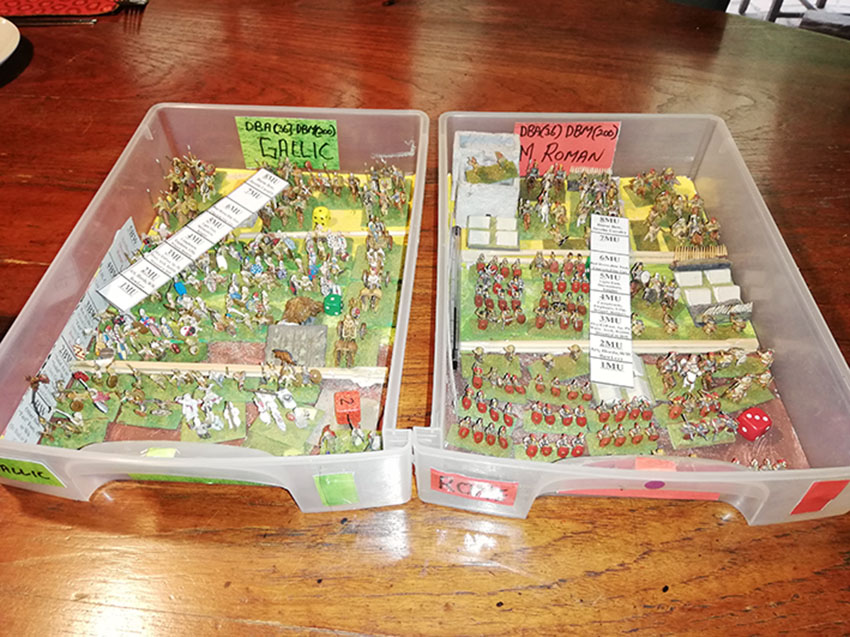