We had lots of fun last night at Spencer's house playing Grand Triumph! Mark, John, and Spencer playing Marian Romans with Numidian ally versus me and DK playing Parthian with Marian Roman ally. So, Marians on both sides of the battlefield. Marians outmaneuvered Parthians significantly and were able to place quite a bit of terrain, but most of it ended up along the edges of the battlefield.

In this picture you can see the Numdians in the center of the Marian formation forming a line of Javelin Cavalry opposite the main force of Parthian Cataphracts. In the distance you can see the Parthian flank march arriving on the left flank of the Roman army. 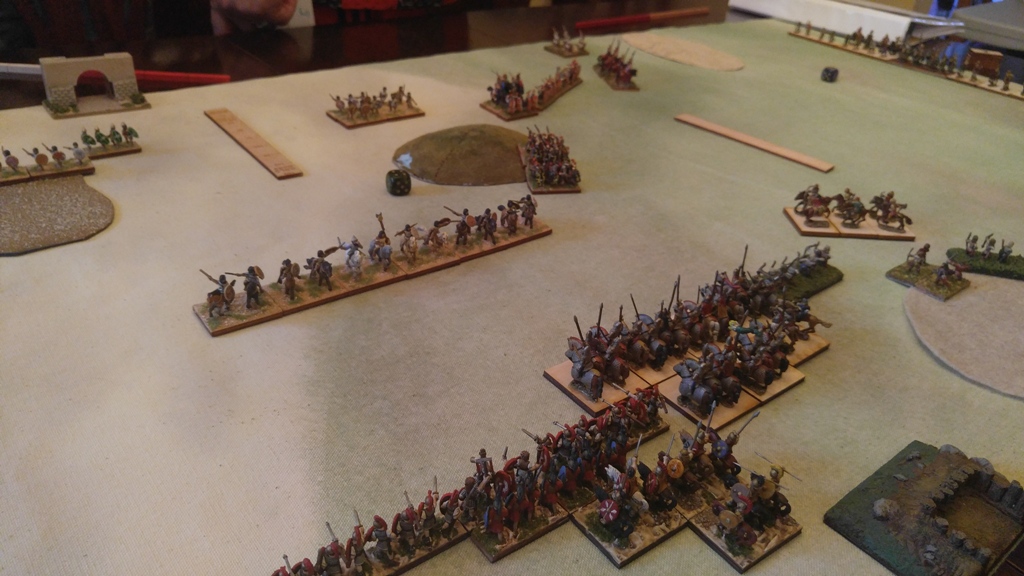 All nice but who won?

Kontos wrote:All nice but who won?

Two Davids. Mark B in the center tried manfully to kill some Cataphracts, but his only significant glory came after his General was killed, his command broken, and his only surviving stand (a Skirmisher) managed to kill a Cataphract that had charged onto the steep hill over the bodies of his light foot. Spencer on the right flank kept getting his line of Elite Foot pushed back by Parthian Horsebow (at one point I rolled like six combat rolls in a row, four 6's, a 5 and a 4) and by the time the Flank march Cataphracts arrived to stiffen the Horsebow line things were already ugly. John Svensson on the left flank had the furthest to go to get killed (they thought the Flank March was going to come in on that side) and was the last to break.

Parthian casualties were about 8pts; I think we lost a couple of Labienus' Roman allies as well.
DK
Top

Yeah, first the 2DS screamed like happy little girls and then the gloating began...... We are planning the rematch now.
I like the new deployment rules. There still is flexibility in how you deploy, but it does not allow the attacker to place his forces willy-nilly all over the board after he sees what the defender has deployed.
Top

You should be used to that reaction by now Spencer.