This army represents the military forces of the Harappan civilization which flourished in the Indus River valley from about 3300 to 1300 B.C. There is little information on this army, other than a single entry in Armies of the Ancient Near East (Stillman and Tallis, WRG, 1984). Please note that this army does not comply with the official list because an elephant stand is included. 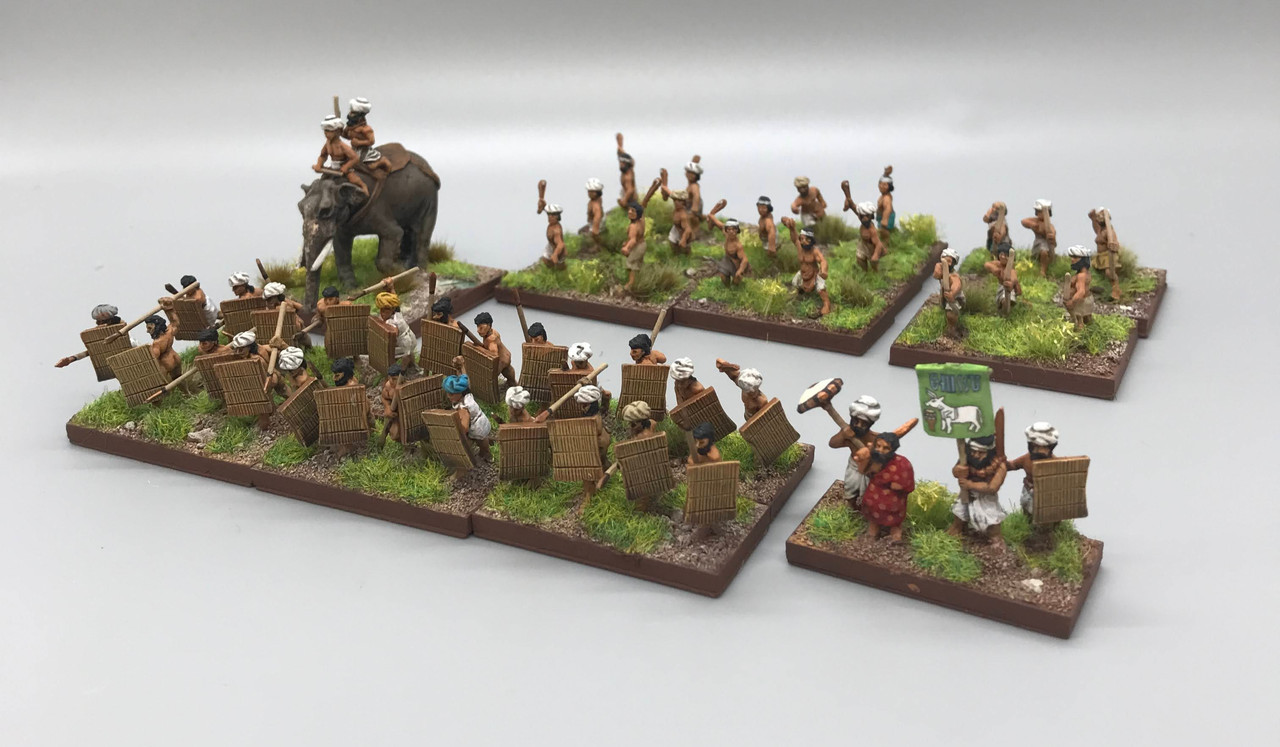 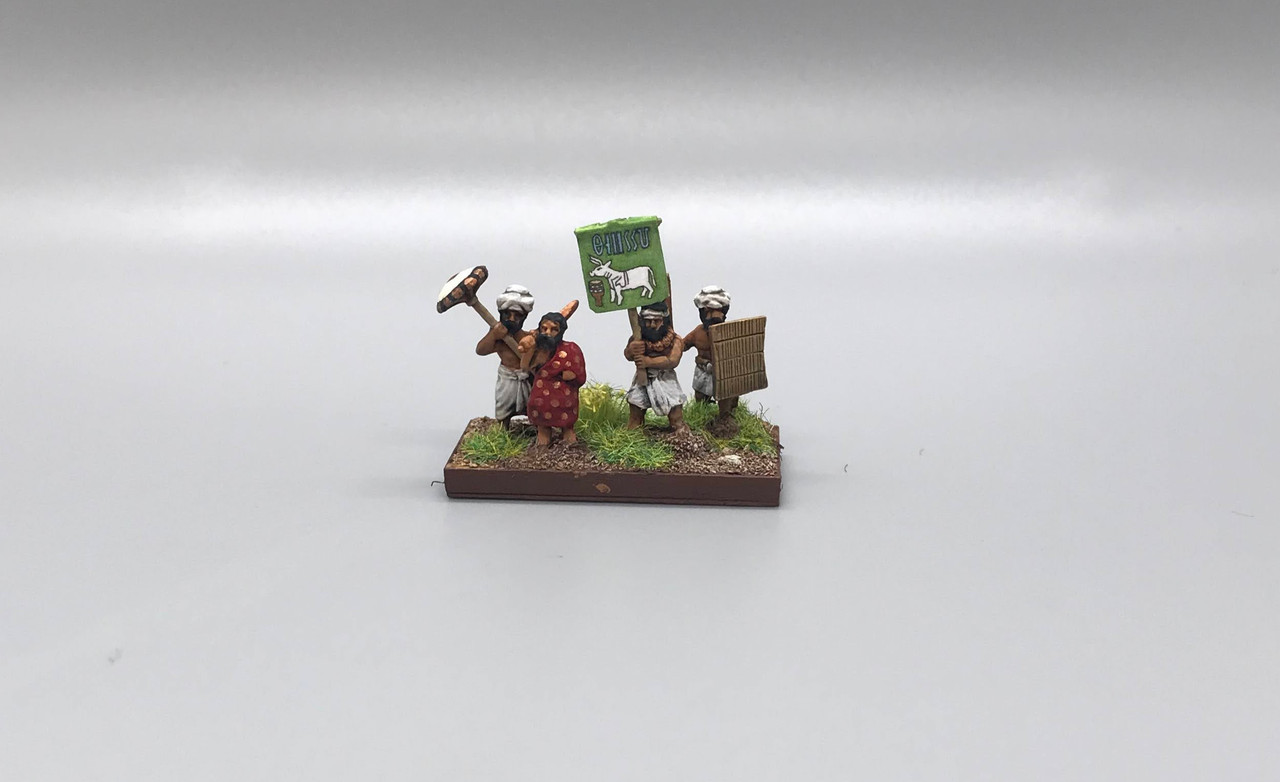 Raiders. This stand represents a young prince, modeled after the “Priest-King” sculpture recovered at Mohenjo-daro. He is wearing a robe that leaves one shoulder bare and is reinforced with copper plates. This looks very similar to the drawing in Armies of the Ancient Near East. His bodyguard is wearing white cotton clothing similar to a dhoti along with carefully wound turbans. The general and the figure with the shield are converted Donnington figures. The parasol carrier is a converted Essex figure. The standard bearer is from Gladiator. The standard was made by printing out a line drawing of a Harappan seal at about 2” square, painting it, then printing that at a much smaller scale on a good printer.

Heavy Foot. There is mention of a possible representation of a square shield in Harappan art. The Indus Valley was in contact with Sumer, and probably sent troops to serve in the Great Revolt there, so these figures are armed with large rectangular shields in the Sumerian style. Their clothing and hairstyles are based on modern paintings and displays of Harrapan life. Many of the troops are nude, based on clay figures recovered from Mohenjo-dao and Harapa. These figures are converted Eureka Hawaiians and Mound Builders. The shields are from Battle Valor games. 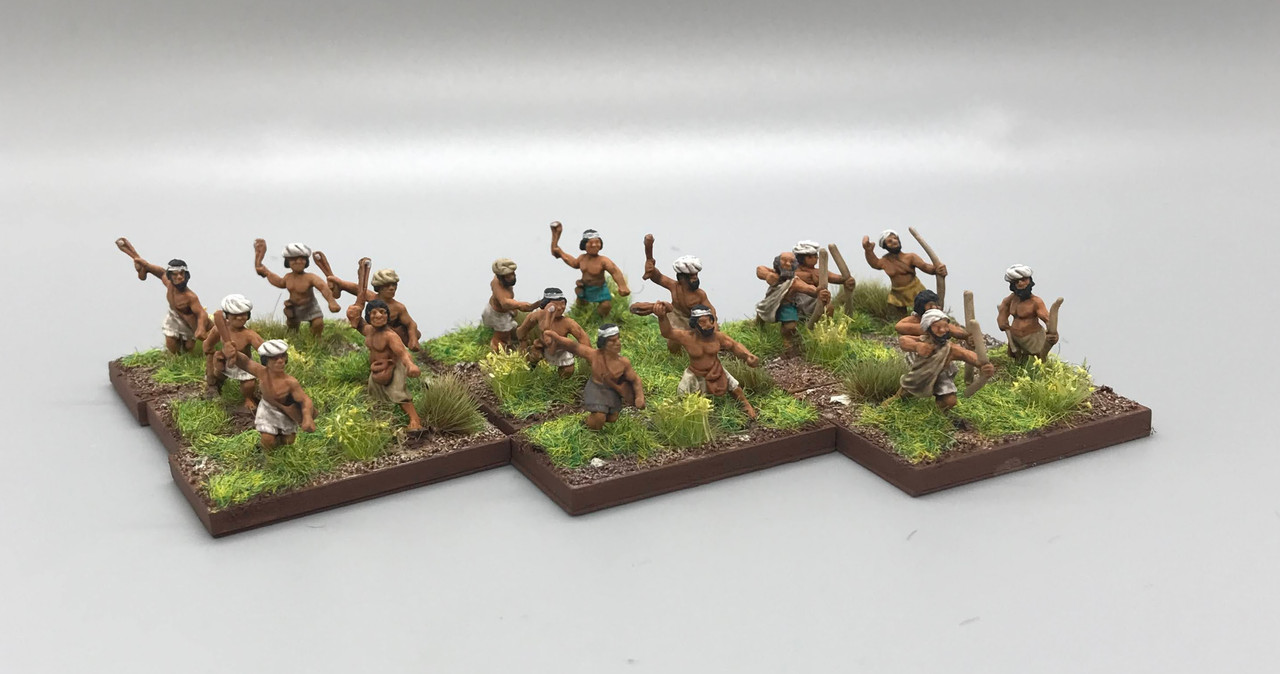 Bow Levy and Skirmishers. These light troops are Essex figures with some small conversions. 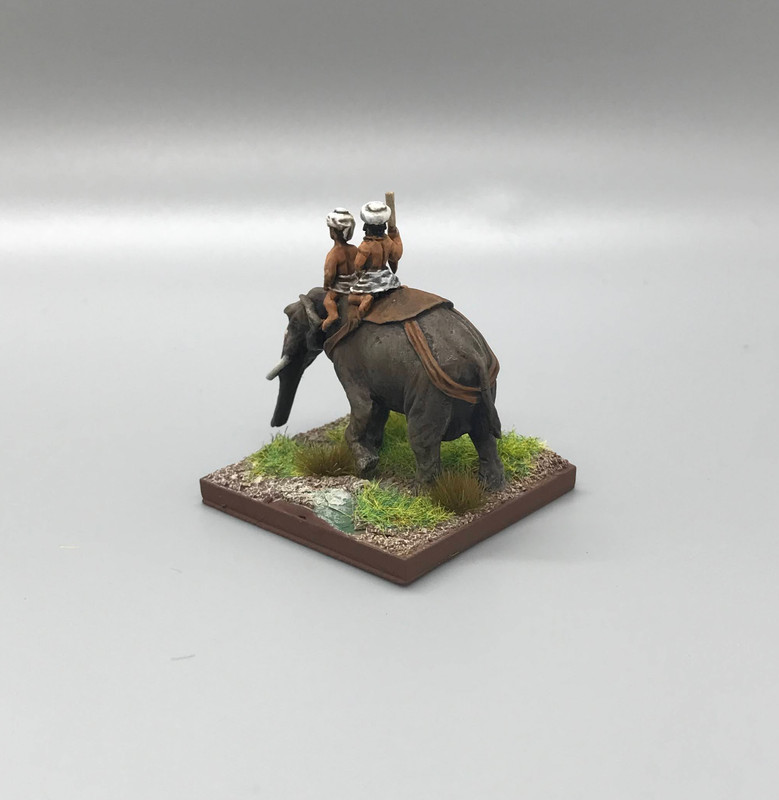 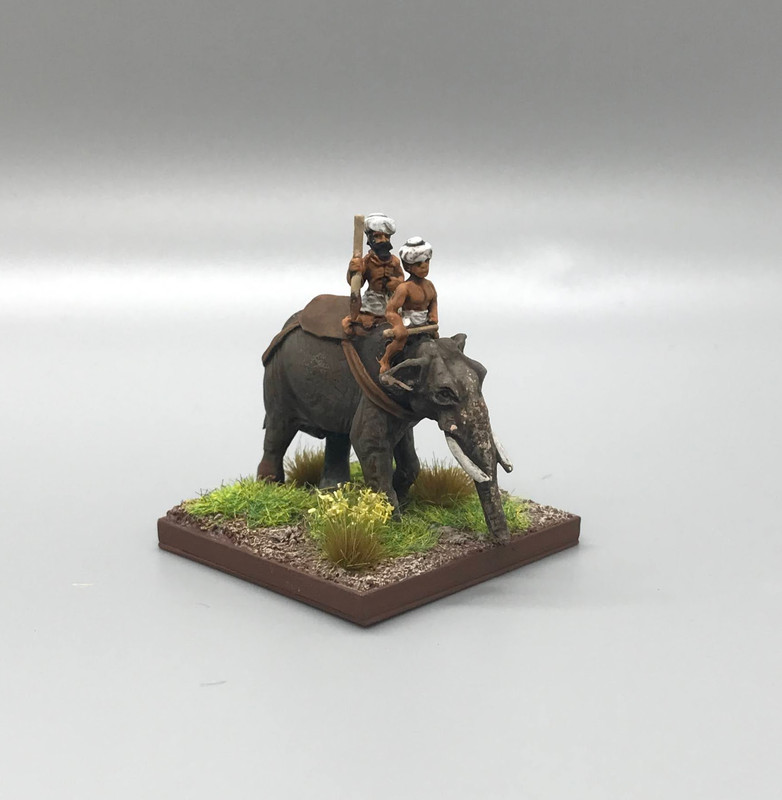 Elephant. Elephants often appear in Indus Valley seals, being second only to the Bull in popularity. Clay models have also been found, in some cases with traces of red and white painted stripes across the face, similar to the way elephants are still painted today for processions. So although this stand is unofficial, it is not an unreasonable addition for use in local games. The elephant is from Khurasan, with a converted driver and warrior from Old Glory.
Top

A lovely looking army Paul with a nice use of disparate ranges. Do you have any more early Indian armies in the pipeline?

No more Indian armies planned at this time. Since you brought it up, I took a first look today at making a Vedic Indian army. The infantry would be easy. But those chariots! Lots of color, banners, umbrellas, heroic archers in elaborate clothing and armor. Could be a real challenge.
Top

Great looking army. Great use of the the modified Eureka figs and the shields tie everything together nicely. I recall earlier you were showing some elements using the Khurasan pre-Vedic range with shortened spears. Wondering if you gave up on them, perhaps because they were shieldless?
Top

"I recall earlier you were showing some elements using the Khurasan pre-Vedic range with shortened spears. Wondering if you gave up on them, perhaps because they were shieldless?"

I thought about using the Khurasan spearmen and fielding these elements as Light Spear with three figures to a base. They are certainly well-scuplted figures with the right kind of clothing. I decided to go with the modified Eureka figures because they are more compatible in size and proportion to my other armies. The Khurasan figures are on the small end of the 15mm spectrum. Also, by using the Eureka figures, I could get a lot more poses. My figures are decently painted but are not going to win any awards, so I try to go for what would look the best and most dynamic in groups on the tabletop.
Top

Texus Maximus wrote: ↑
Sat Oct 16, 2021 4:31 pm
My figures are decently painted but are not going to win any awards, so I try to go for what would look the best and most dynamic in groups on the tabletop.

Too modest. I’ve come to the opinion that overall composition, posing and basing are as important as painting in the look of an army. Your armies are always well composed, crisp and realistic to me, and are some of my favorite eye candy. Helps that you are also good at lighting and taking pictures.

Thanks for all the positive feedback. Now that I am retired for the second time I hope to keep producing more content that supports Triumph!

As for the pictures, the trick is to buy a light box. They are fairly cheap for a simple one. I think mine was $35. Set it up, line up the miniatures, and take the pictures with my (old) Phone.
Top

Nice looking army!!!
And thanks for the tip with the light box.
Top
Post Reply
9 posts • Page 1 of 1