This Syrian army represents the forces available to the various city-states of Greater Syria, an important cultural and economic crossroads with valuable exports of cedar, pine, and cypress from the Ammanus and Lebanon mountains. (Colello, 1987) The northern part of ancient Syria was more culturally Sumerian, with their warriors in the early times equipped in either native garb - a simple kilt - or in Sumerian gear. (Hamblin, 2006). However , I chose to use figures for this army reflecting their appearance during the Egyptian New Kingdom with more of a Canaanite influence. They are organized here for the Early Syrian army list; One Chariot, six Pike, nine Bow Levy, and four Rabble. 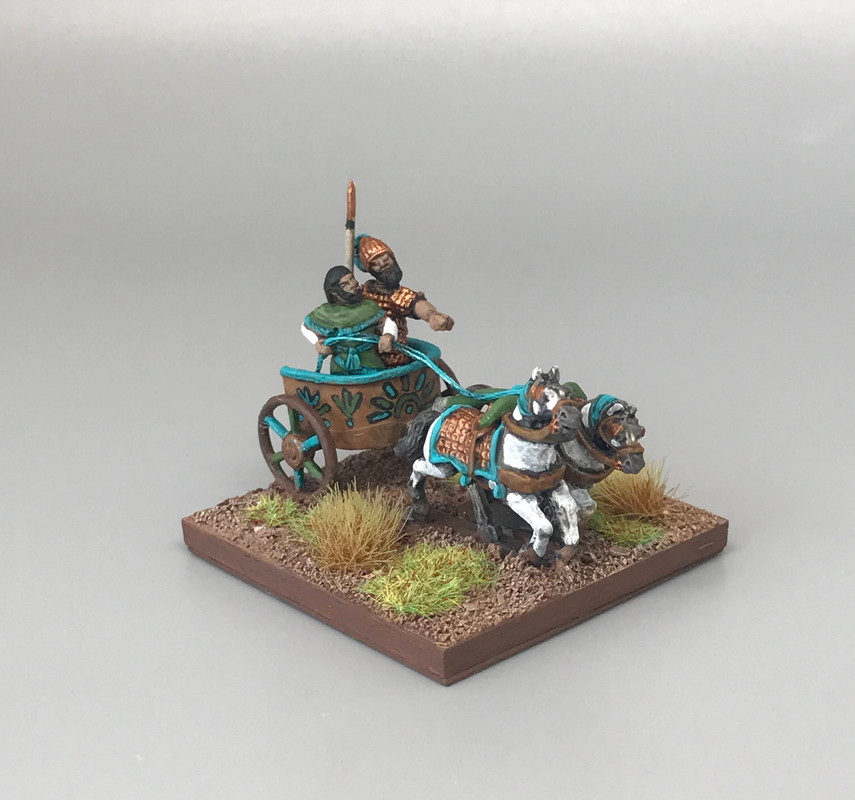 Chariot. This chariot is a mix of figure brands - an Essex chariot and driver combined with an Old Glory officer and horses. The chariot body looks similar to a Hittite chariot while the horse trappings look Egyptian, which seems appropriate for a cultural and economic crossroads like Syria. The chariot body is decorated with a pattern based on a gold clothing ornament found at Tell Halaf in Syria close to the border with Turkey. 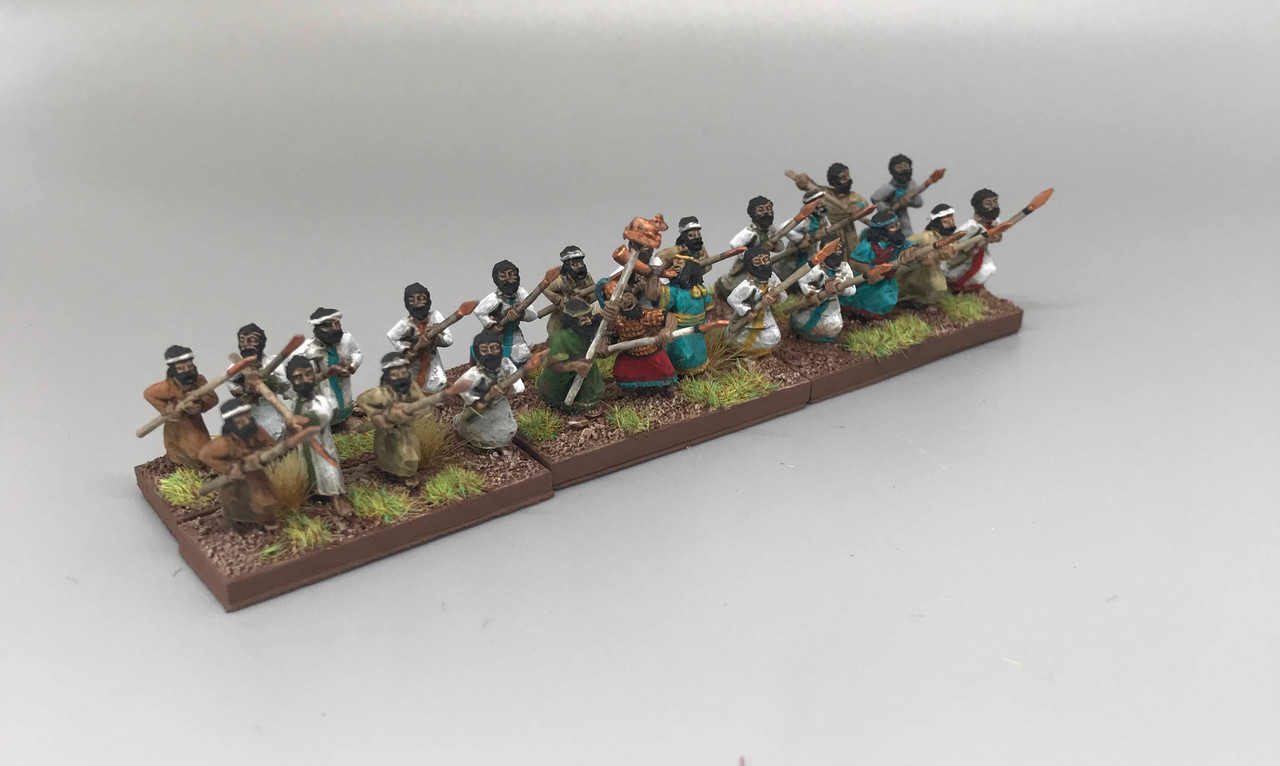 Pike. The spear-armed troops are wearing simple clothing, in this case mostly white ankle-length robes with long tight sleeves and colored hems. (Stillman and Tallis, 1984). The shoulder-length black hair with headbands and short pointed beards are taken from a tomb painting from the reign of Thutmose III (circa 1450 B.C.) shows Syrian tribute bearers wearing similar clothing and hairstyles. These figures are almost all Old Glory brand “Arab Peasants”, with their weapons replaced with spears made of brass rod, hats cut off and changed to headbands, and any two-piece garments filed down to make a one-piece robe. One of the Pike stands can be the Army General if desired, so one command stand from the Syrian City States command pack is included. The officer figure is wearing scale armor similar to what a chariot warrior might have worn. (ibid) 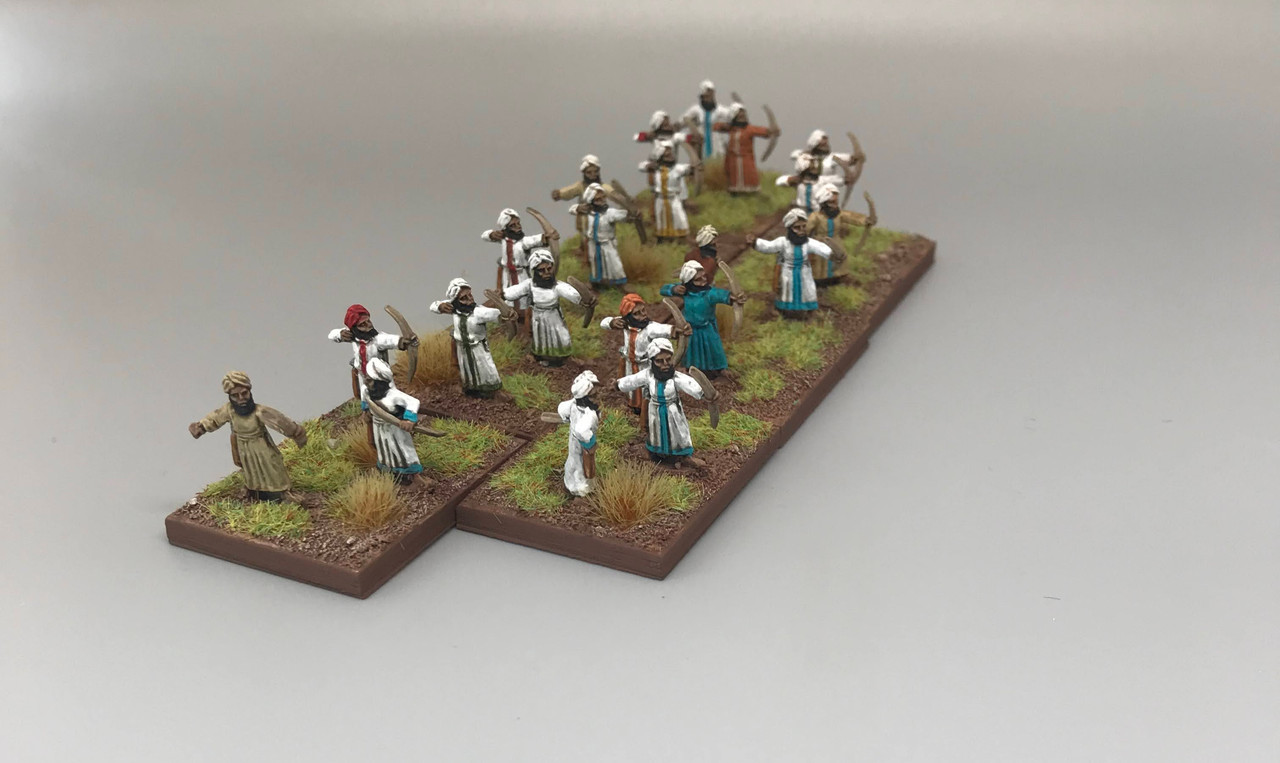 Bow Levy (levy or militia bowmen). These bowmen are dressed similarly to the pikemen, except in this case wearing turbans typical of Canaanite peasant levy. (Healy, 1992) The figures used are Old Glory brand Arab archers, slightly modified by having their swords and scabbards removed. 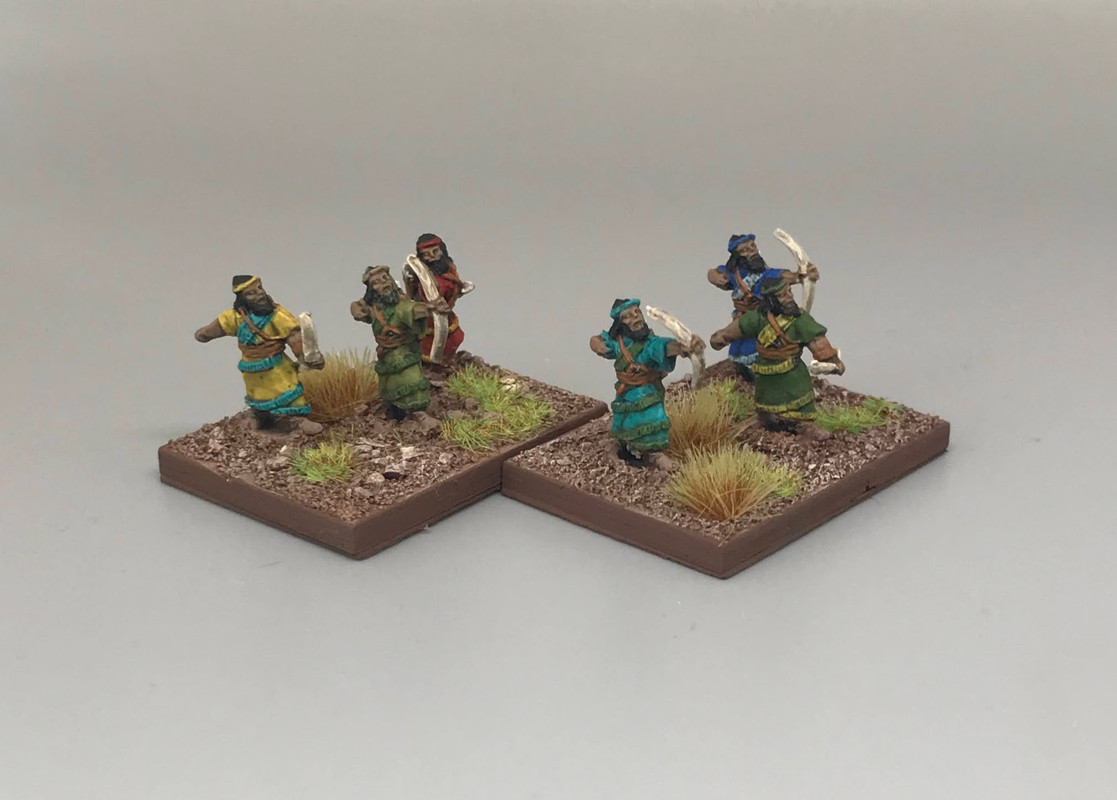 Bow Levy (household bowmen). These troops are wearing “brightly colored and embroidered robes” typical of chariot troops of the 15th to 13th century B.C. (Stillman and Tallis, 1984). The color choices were taken from a 19th-century illustration of Babylonian and Assyrian clothing but are consistent with the colors (white, blue, green, red, and purple) known to have been used by the Syrian chariot troops. (ibid) The figures used are unmodified Old Glory brand Kharu Archers. 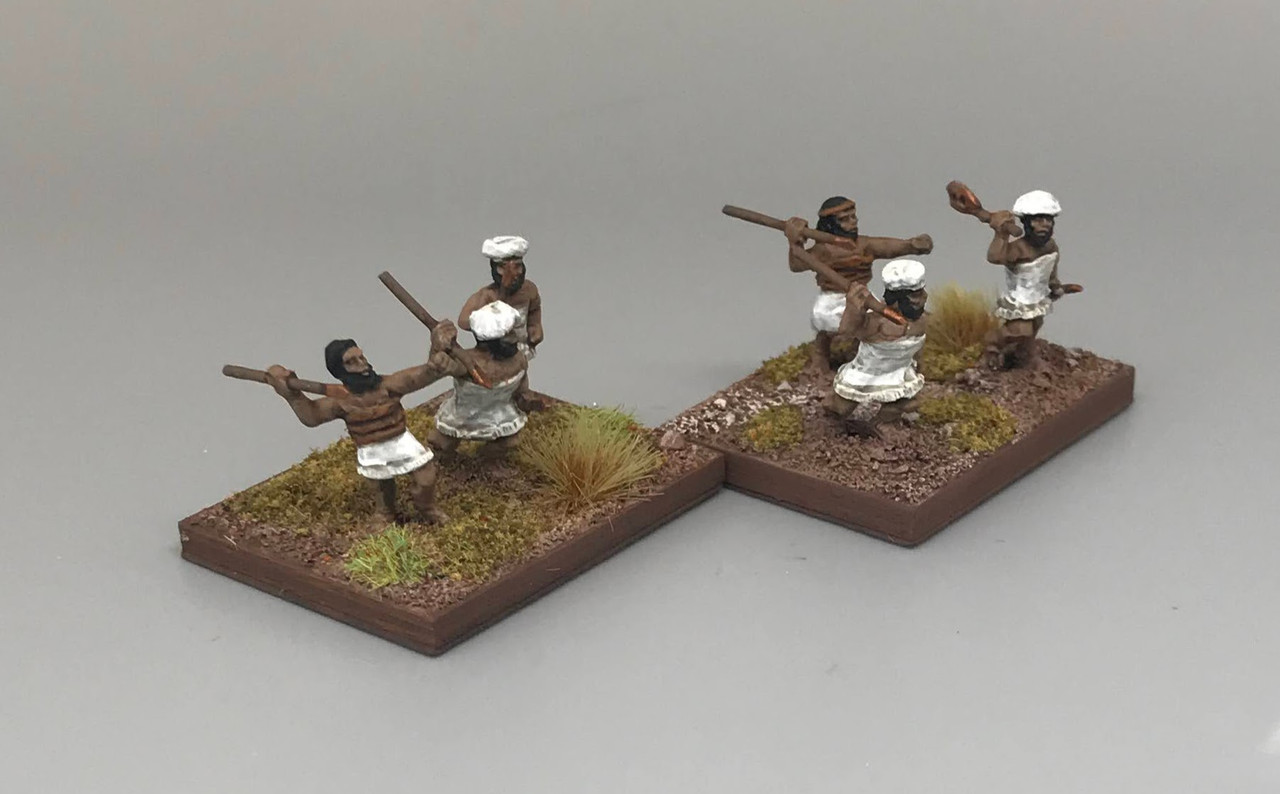 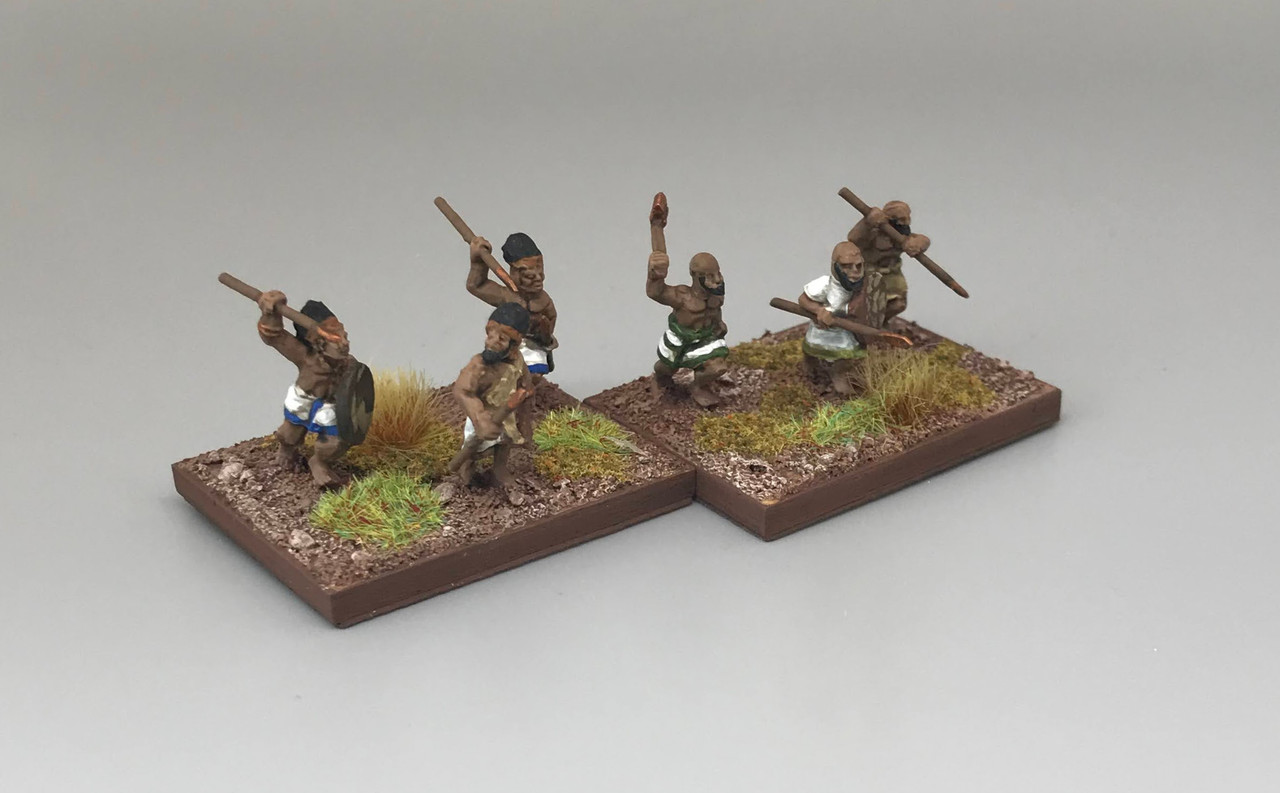 Rabble. The four stands of Rabble are wearing a wide range of clothing to represent their status as “hupshu” peasant soldiers. One stand represents troops of the Shasu tribe with their distinctive swept-back stovepipe hairstyle. The others are Canaanite and Syrian troops wearing simple kilts, tunics that run from the armpits to above the knees, or a kilt combined with leather bands of armor across the chest. (Stillman and Tallis, 1984) The troops are all modified figures from Old Glory and include poses from their Nubian, Canaanite, Arab, and Japanese ranges. 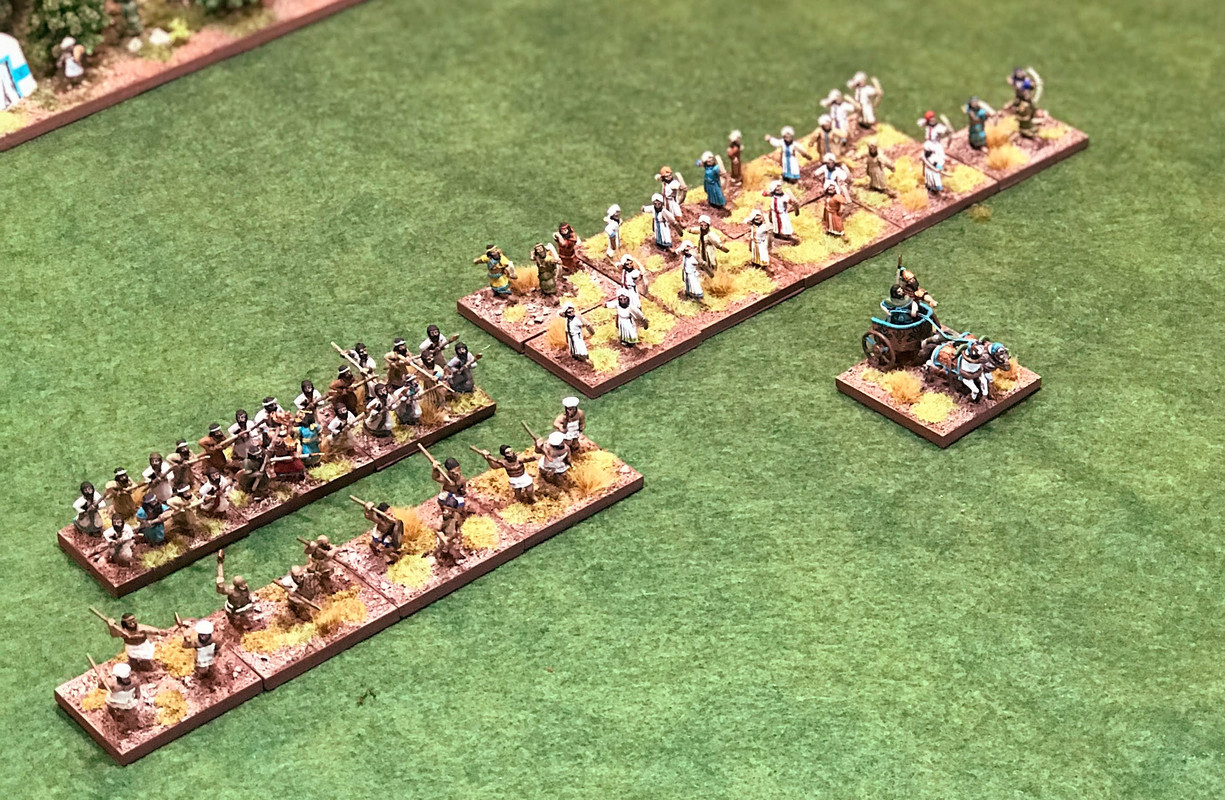 Very nice and inspiring! What is the color for the skins?
Top

Your armies are always so well presented they must be a pleasure to roll out occasionally, win or lose.
Thief. Reaver. Slayer.
Top

Thanks for the positive replies!

About painting skin tones:
I use craft paints for all my work, because they are inexpensive and easily available. The color I use for skin tones is called "Coffee". It gets pretty dark when I stain it with a coat of Minwax Polyshades (Tudor), but I like to think it works because these troops have spent a lifetime outside in the sun. I am open to suggestions though and would like to hear what other people use. 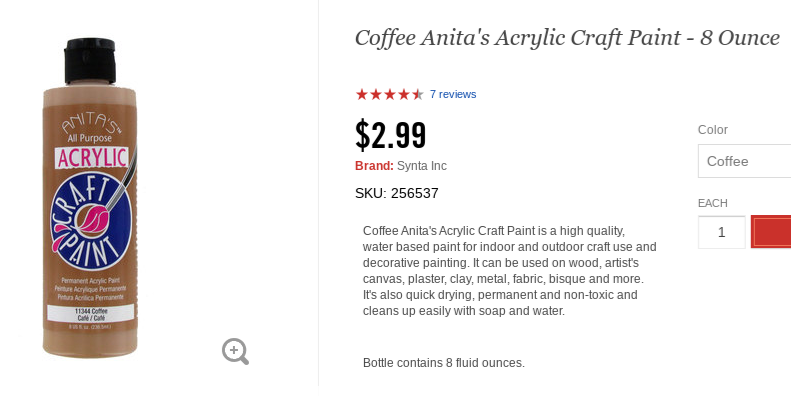 I use tanned flesh from coat dàrmes which is definetly a lighter tone. I had used Games Workshop Vermin Brown for Numidians which worked well for me on these berberlike men. But I tend to use lighter colors because I like black undercoating the miniatures if possible.
Top

Here are a few items of scatter terrain. No game effect; just for fun. 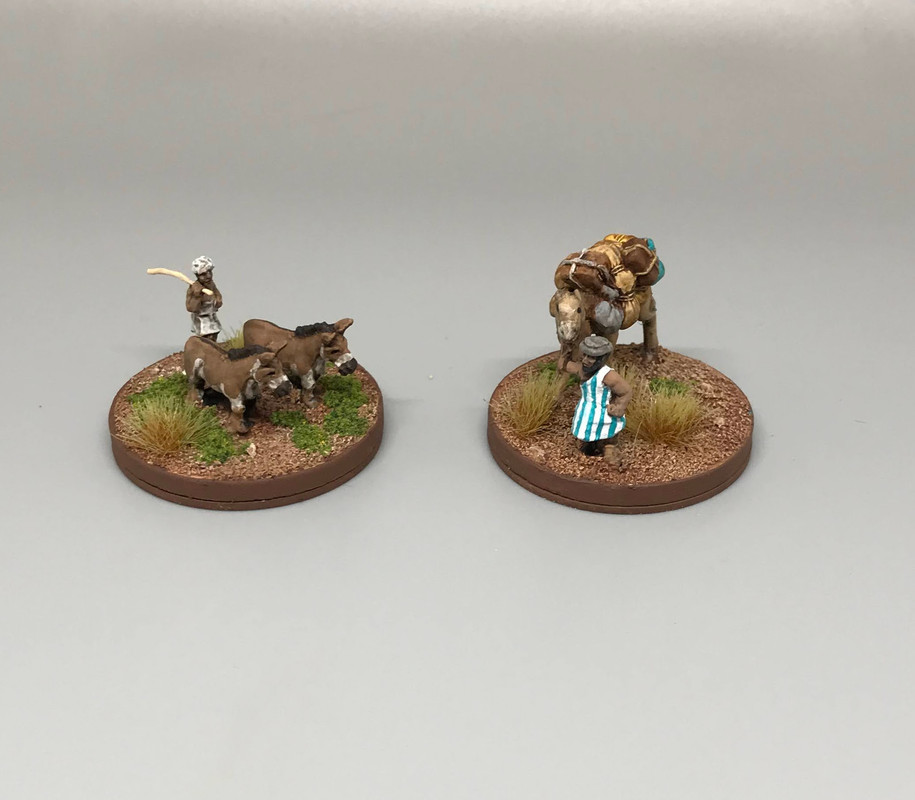 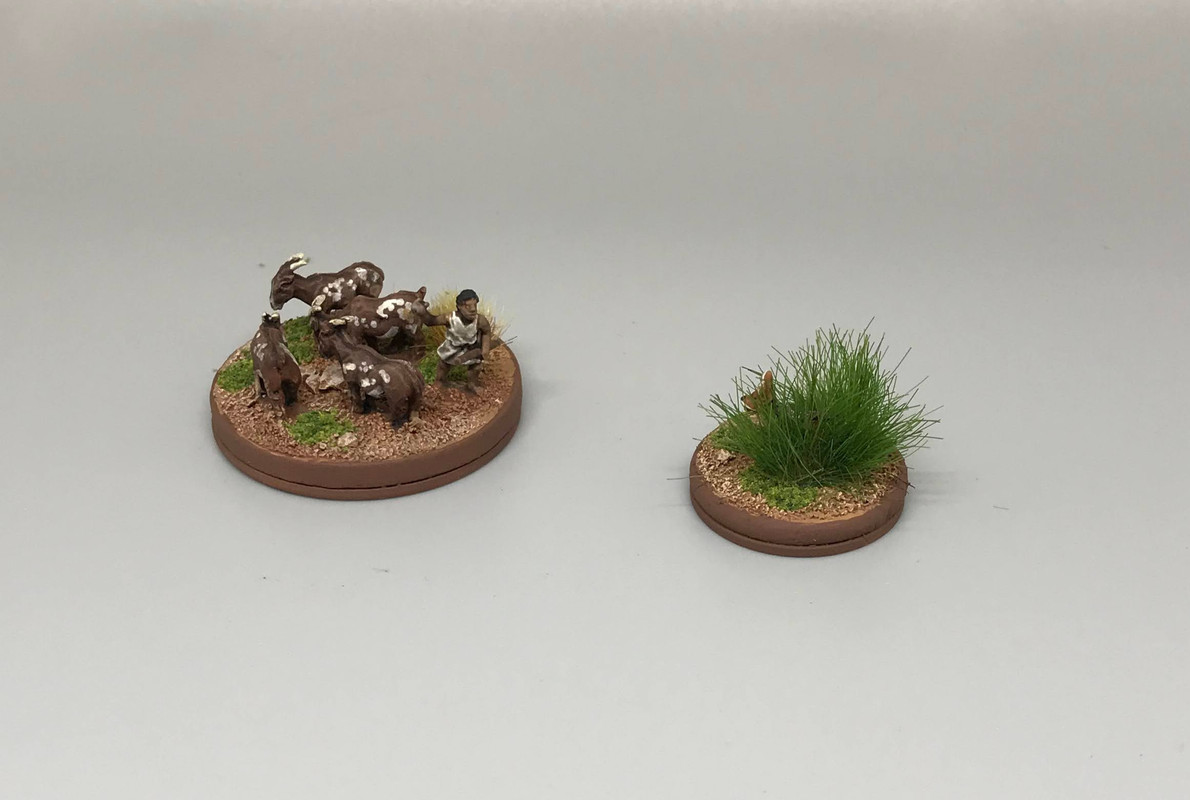 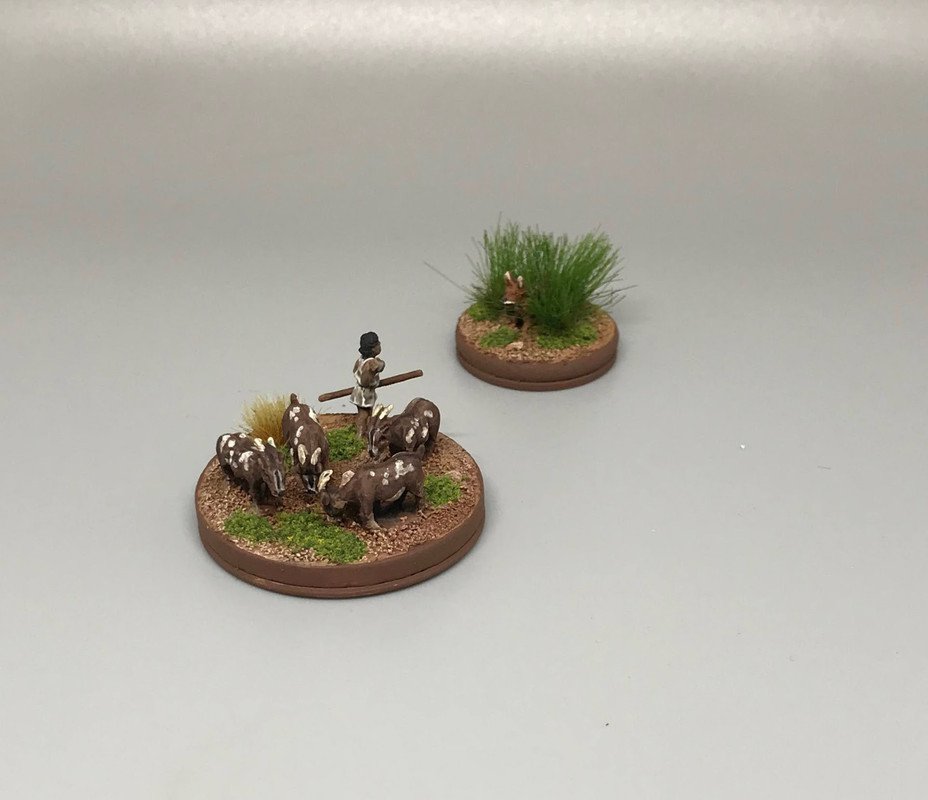 These items are designed around two themes - the importance of the pastoral economy and regional trade. Two pieces are some livestock that would be typical of the region - a herd of goats guarded by a young man holding a staff in one hand and preparing to throw a stone at a lurking jackal, and a pair of onagers. Another is a trader leading a heavily-laden camel.

The goats are from Forged in Battle. The goatherd is from Xyston. The jackal is a modified terrier, which explains why I tried to hide his stubby back half in the tall grass.

The trader is a modified Old Glory Canaanite, with a long tunic/dress and a flat cap added. The camel, I believe, is from Stone Mountain. I bought that camel about 30 years ago and have now finally made use of it. (That is not my record for purchase-to painting time...the longest was 36 years. I bought a Heritage Miniatures hydra in 1980 and painted it in 2016).

I am not sure where the onagers came from, but they are great castings. The herdsman is a modified Donnington Arab.

Up next: the final scenic item...the Temple and Priest of Dagon!
Top

Once more some nice ideas and good work! I espacially like the livestock which is always a nice addition to historical games.
Top 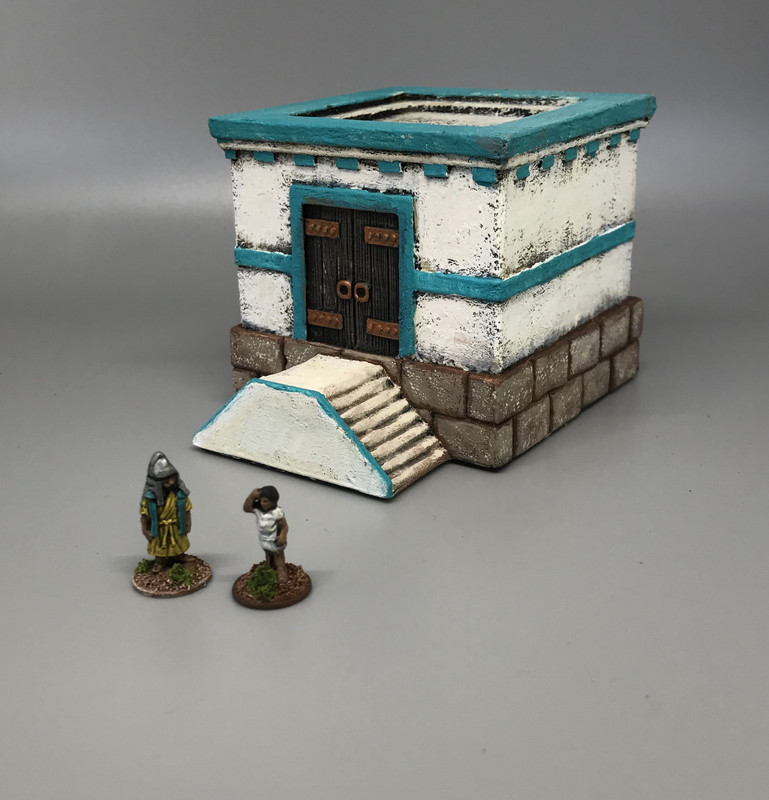 This 15mm temple of Dagon can be used for village terrain or could serve as a camp. This model is a cube-like structure, featuring large blocks of limestone at the base, austere lines and decorations above that, with stairs in front. So it is a decent match for the descriptions I have found of ancient Syrian/Phoenician temple architecture. 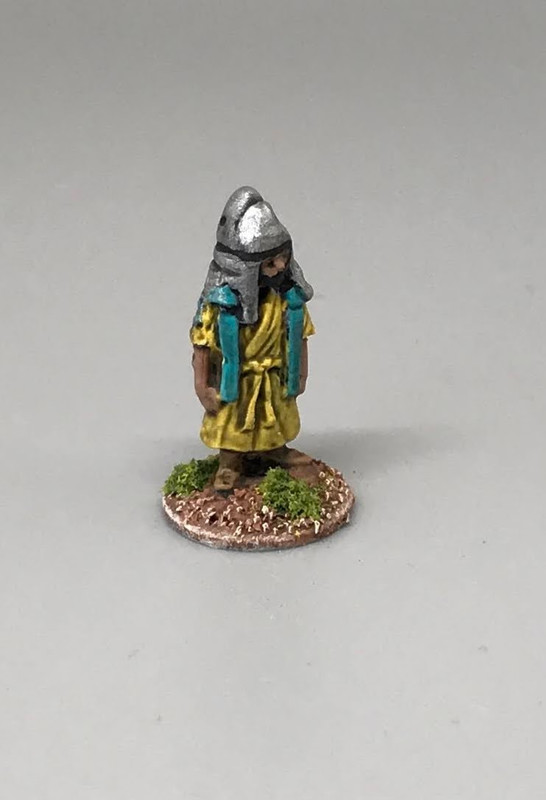 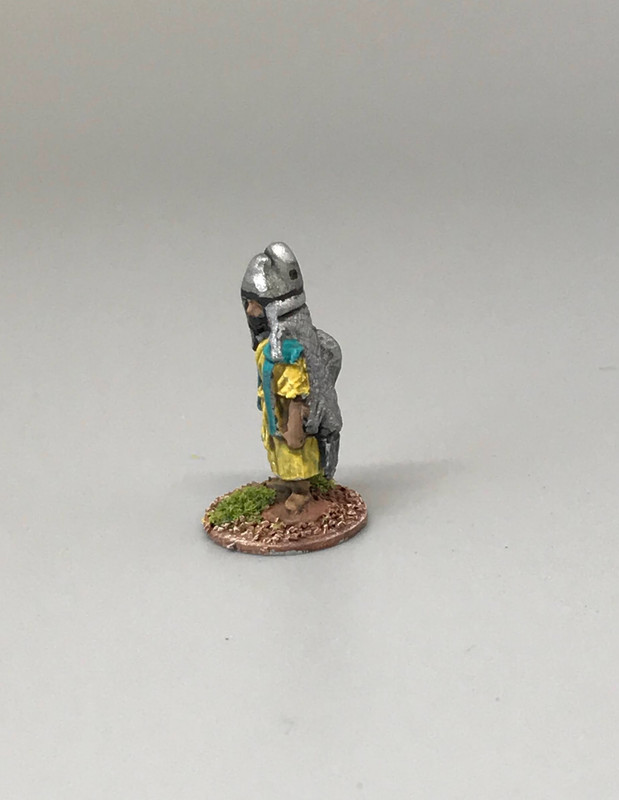 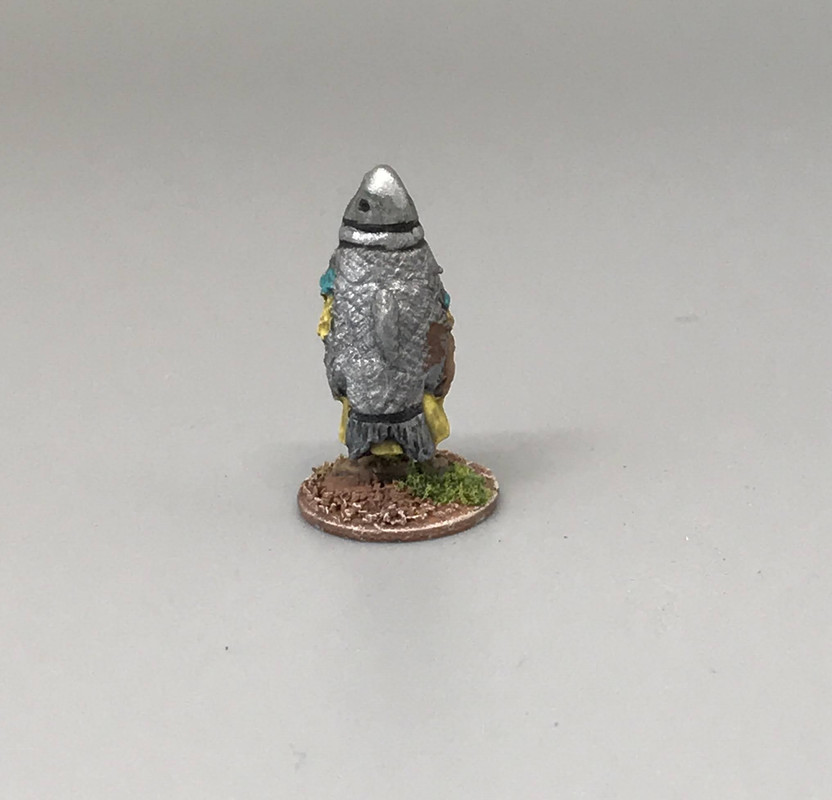 The priest of Dagon is more of a stretch. I found several images from Babylonia showing men wearing a fish-shaped hat and cloak. These apparently represent “Apkallu”, demi-gods associated with wisdom in Mesopotamian lore. There are also quite a few less-trustworthy claims that these Apkallu represent priests of Dagon. In the end, I found it impossible to resist making a priest of Dagon wearing a fish-hat and cloak but I make no claim that it is strictly historical. He is accompanied by a young man listening to the priest’s instruction. 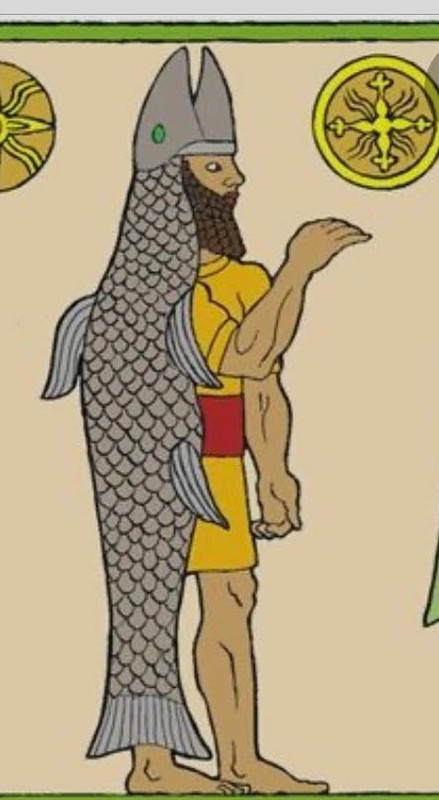 The temple is from Crom’s Anvil. The priest is a pagan priest figure from Crom’s Anvil, modified with a hat and cloak made from Greenstuff. I highly recommend checking out Crom’s Anvil; their products are geared towards Conan-style fantasy but many pieces will work for historical miniatures. I am not sure where the other figure is from. Maybe Essex?
Top
Post Reply
11 posts