Here is a test stand of Zagros Highlanders who will be opponents for the Sumerians. These are converted Eureka Hawaiians and North American Indian figures. 15mm scale. 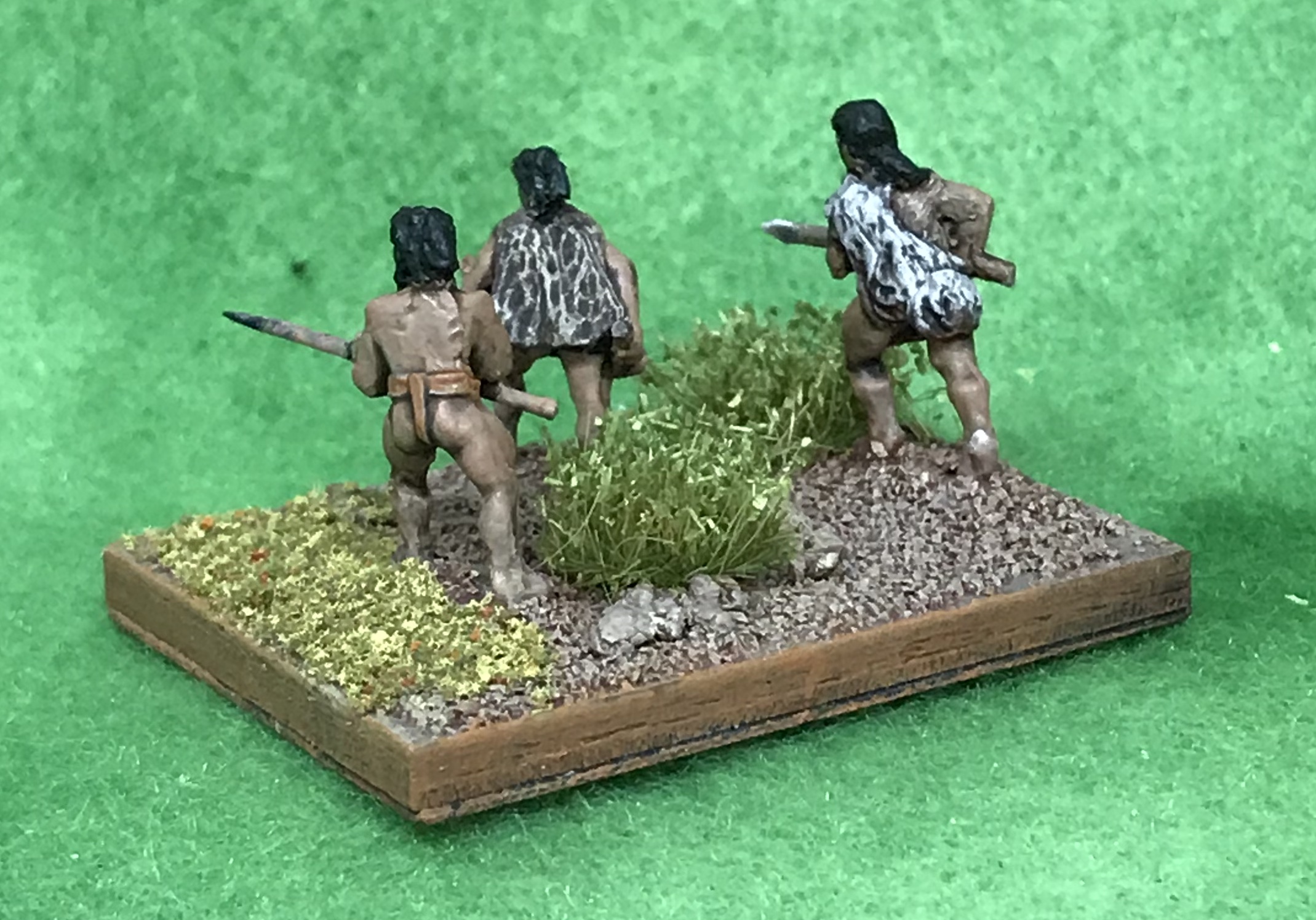 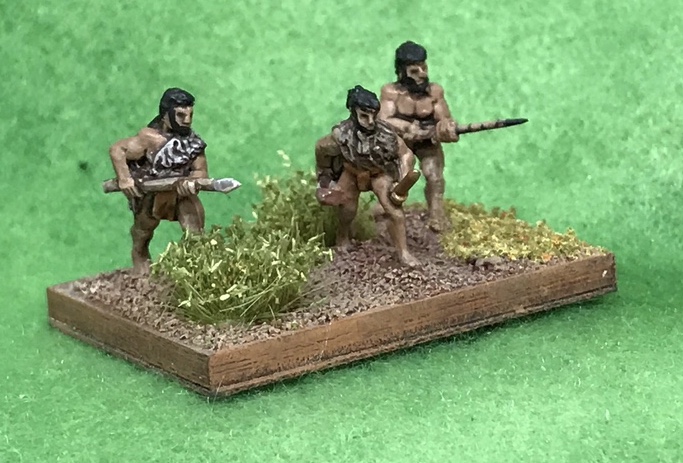 This army represents the highland warriors of Gutium and Lullubi in the early Bronze Age. They inhabited the Zagros mountains east of Babylonia and north of Sumer. The language they spoke is almost entirely unknown; the only surviving words are a list of names in the Sumerian Kings list from early in the second millenium. There are also no confirmed examples of their material culture. This army is focused on the early years of the Zagros Highlanders, before they conquered Sumer and became kings of cities.

We do have some visual evidence. The Victory Stele of Naram-Sin, dated about 2200 B.C., shows a group of Lullubi warriors. They seem to be wearing simple clothing of animal skins draped from one shoulder. One is armed with a spear. Their hair is short or shaved off except for a long scalp lock.

There are descriptions of the Gutians from Sumerian literature. A Sumerian text “The Victory of Utu-ḫeĝal” (3rd millenium B.C.) describes them:

“Gutium, the fanged (?) snake of the mountains, who acted with violence against the gods, who carried off the kingship of Sumer to foreign lands, who filled Sumer with wickedness, who took away spouses from the married and took away children from parents, who made wickedness and violence normal in the land.” Later the King of Gutium is said to have “blocked the water from the fields, in the uplands he closed off the roads. Because of him the grass grew high on the highways of the land.”

Another description from about 2000 BC is equally dark:

“The well-known ‘Curse of Agade’ includes a detailed passage concerning the Gutians, which could well be called the “Scorn Chapter”. It depicts life under their rule as stagnated, backward and intolerable, an attitude permeating the whole section. It begins with the description of the Gutians themselves, "who looked like humans but were not. They were ugly creatures, cunning with evil intent, and more importantly, they were not part of the civilized world of Mesopotamia, but aliens: Not classed among people, not reckoned as part of the land/country, Gutium, a people not to bridle, with human instincts, but canine intelligence, and monkeys’ features.” (Ahmed. The Beginnings of Ancient Kurdistan). It later states “the Gutians are described as hordes intent on destroying any sign of life: Enlil brought them out of the mountains. Like hordes of locusts they lie over the land; their arms are stretched over the plain for him (Enlil) like a snare for animals; nothing leaves their arms; no one escapes their arms.”

This same reference states some Gutians may have served in the Akkadian army.

The figures for this army are almost all Eureka 15mm miniatures from their Native American, Sumerian, and Hawaiian ranges, along with a few Lullubi figures from Essex. I took the reference to having monkey’s features to mean “wiry, energetic, and clad in fur” so the action poses and lean build of these figures was ideal. Many have kilts or simple cloaks of animal hide added using Green Stuff. Some have beards or scalp locks added. They are almost all equipped with javelins with bronze or in some cases stone heads. Some have bronze daggers, having brought them back home after service in the Akkadian army. There is a dog on one stand, a reference to their animal-like cunning.

The general is a Khurasan miniatures caveman with a head swap with a Chariot miniatures Lullubi figure. His club was converted to a Sumerian bronze sword. He wears the white wool kilts of captured Sumerian kings as a cape. The remainder of the Raider figures will be suitably converted Khurasan-brand cavemen clad in animal hide kilts.

I have some place-holder bases with the troop types written on them in the photo also. I regret now that I didn’t write them in Akkadian script. Ah well, my shame will be covered in paint and and static grass soon enough.

The single figure on the round base is scatter terrain to place in rough ground. It is a Lullubi warrior (Chariot Miniatures) lurking among the rocks.

The parts for the camp are on order. It will be some Gutian warriors leading away a column of adult and child prisoners while other warriors smash up an irrigation canal gate and throw a statue of a Sumerian god into the water. 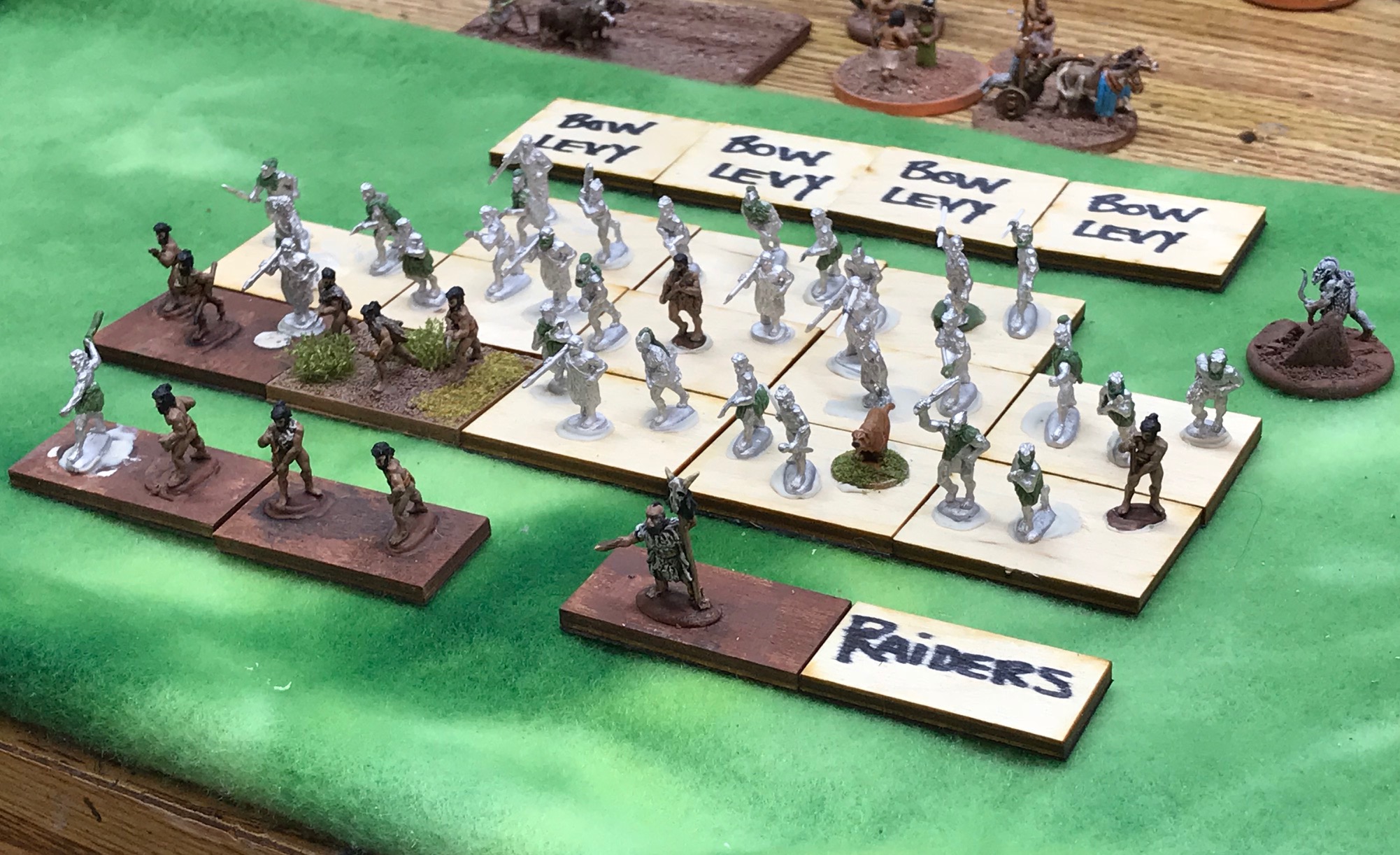 Draft version of the camp. In the foreground a warrior prepares to throw a Sumerian idol into a well. A column of Sumerian prisoners and a cow are being led away by a guard. In the background, more warriors are busy preparing to execute another prisoner. One of the prisoners has turned to look toward the execution and is told to get back in line by a Lullubi chieftain.

Prisoner figures are Old Glory. The guards are by Eureka. The chieftain is a converted Khurasan caveman. The warrior throwing the idol is a slightly converted Eureka Hawaiian priest.

The well is from Croms Anvil. The baskets are from Baueda, and finally the building is a modified War and Empire resin piece. 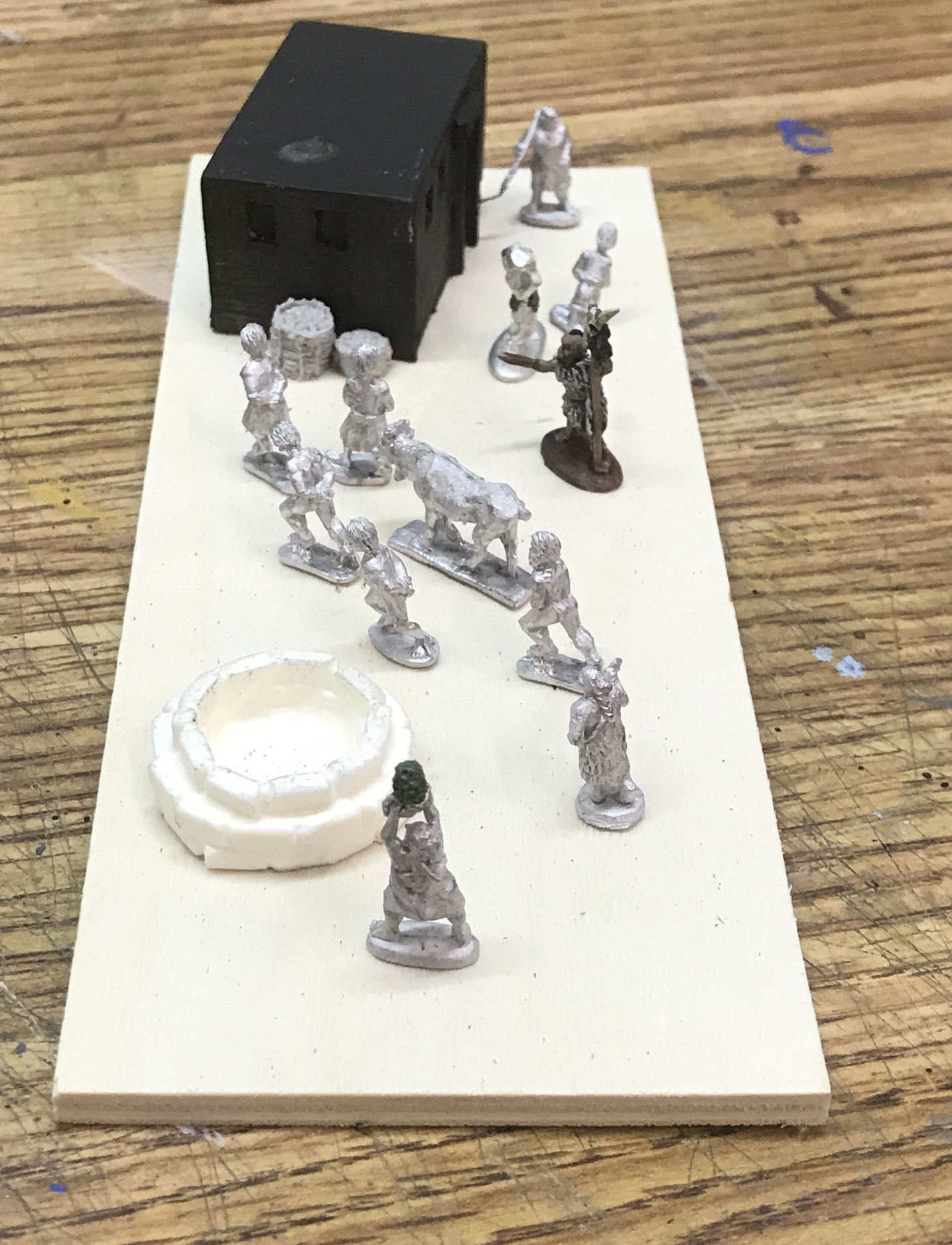 Some finished stands of Raiders, Rabble, and scatter terrain. 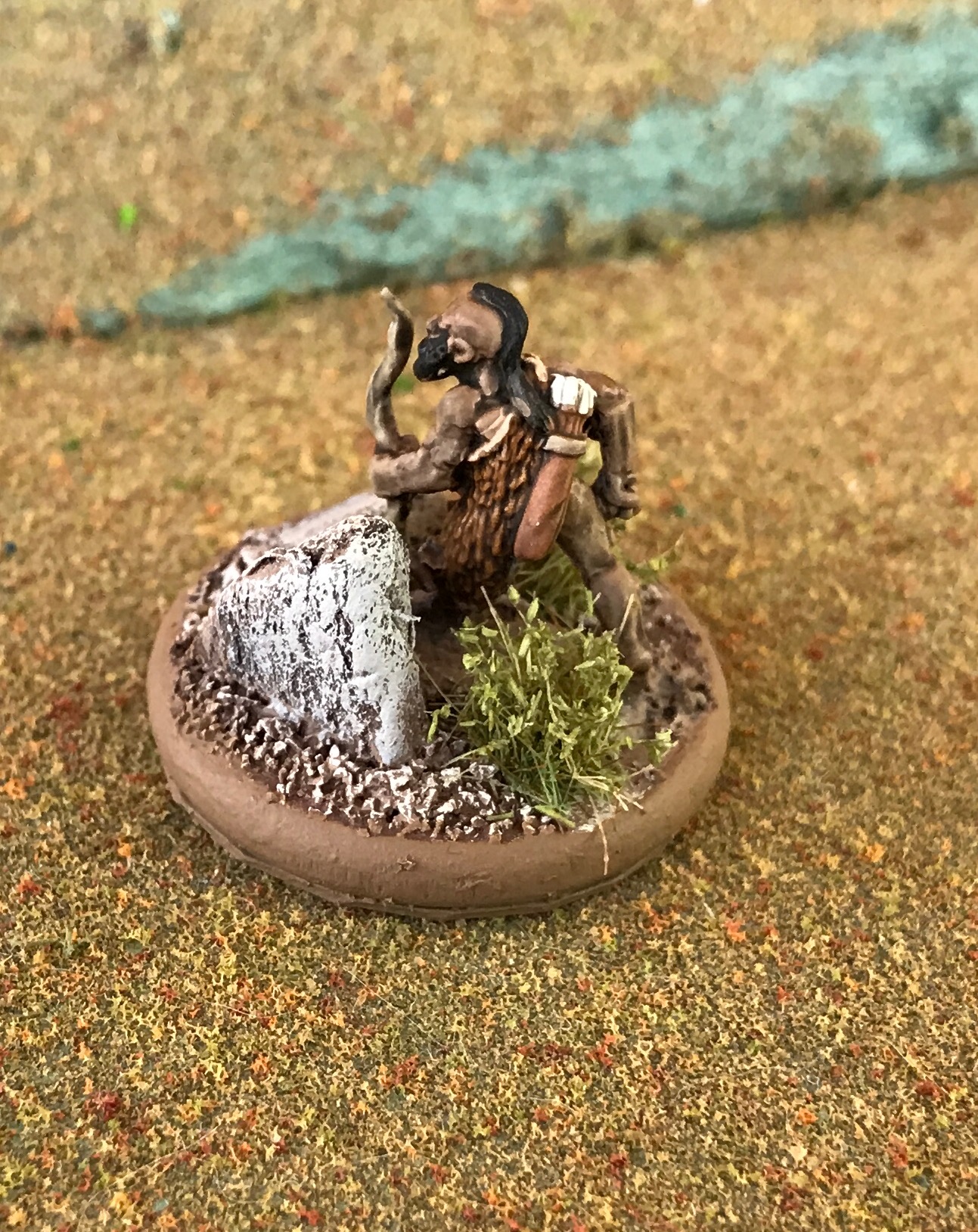 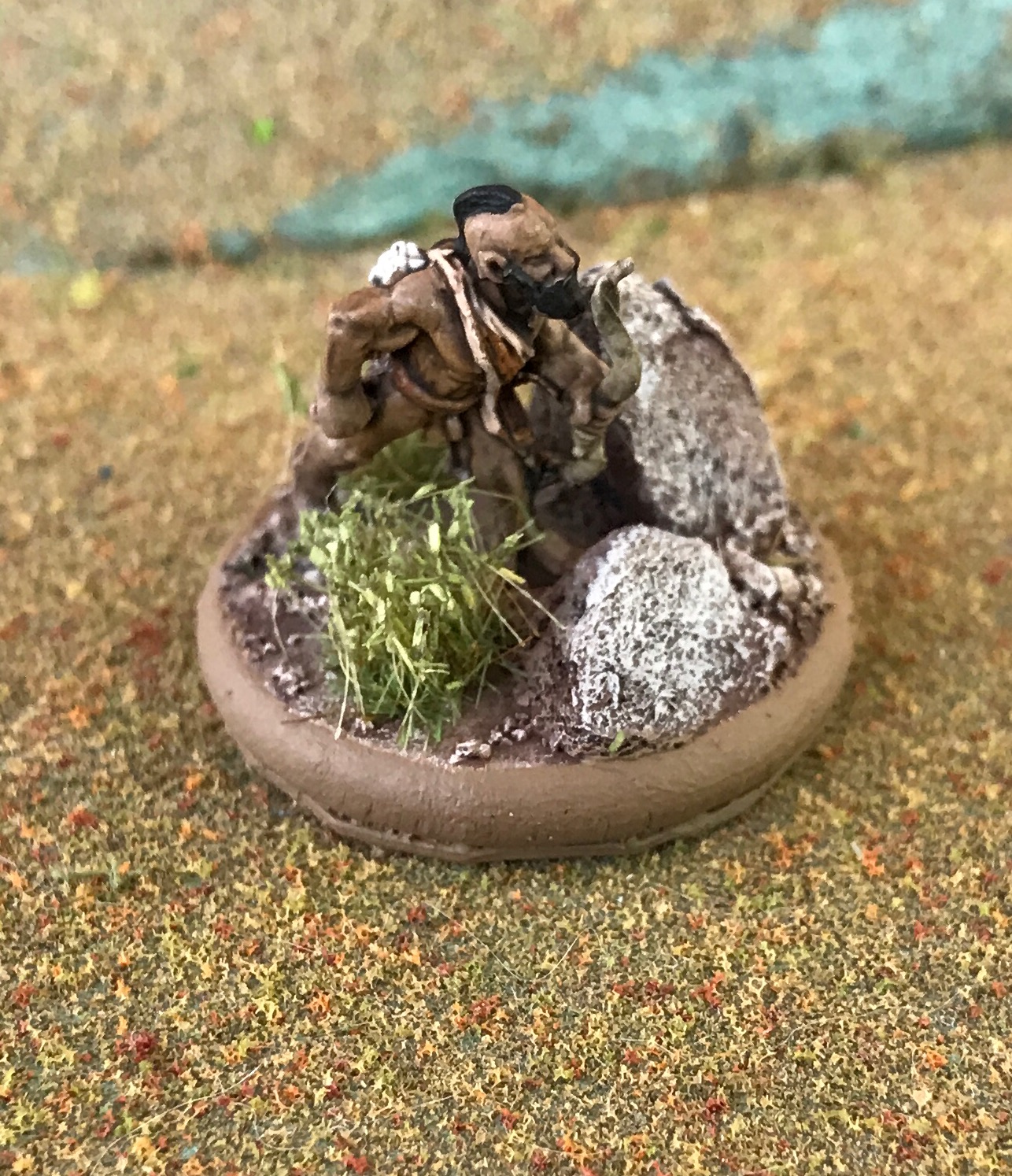 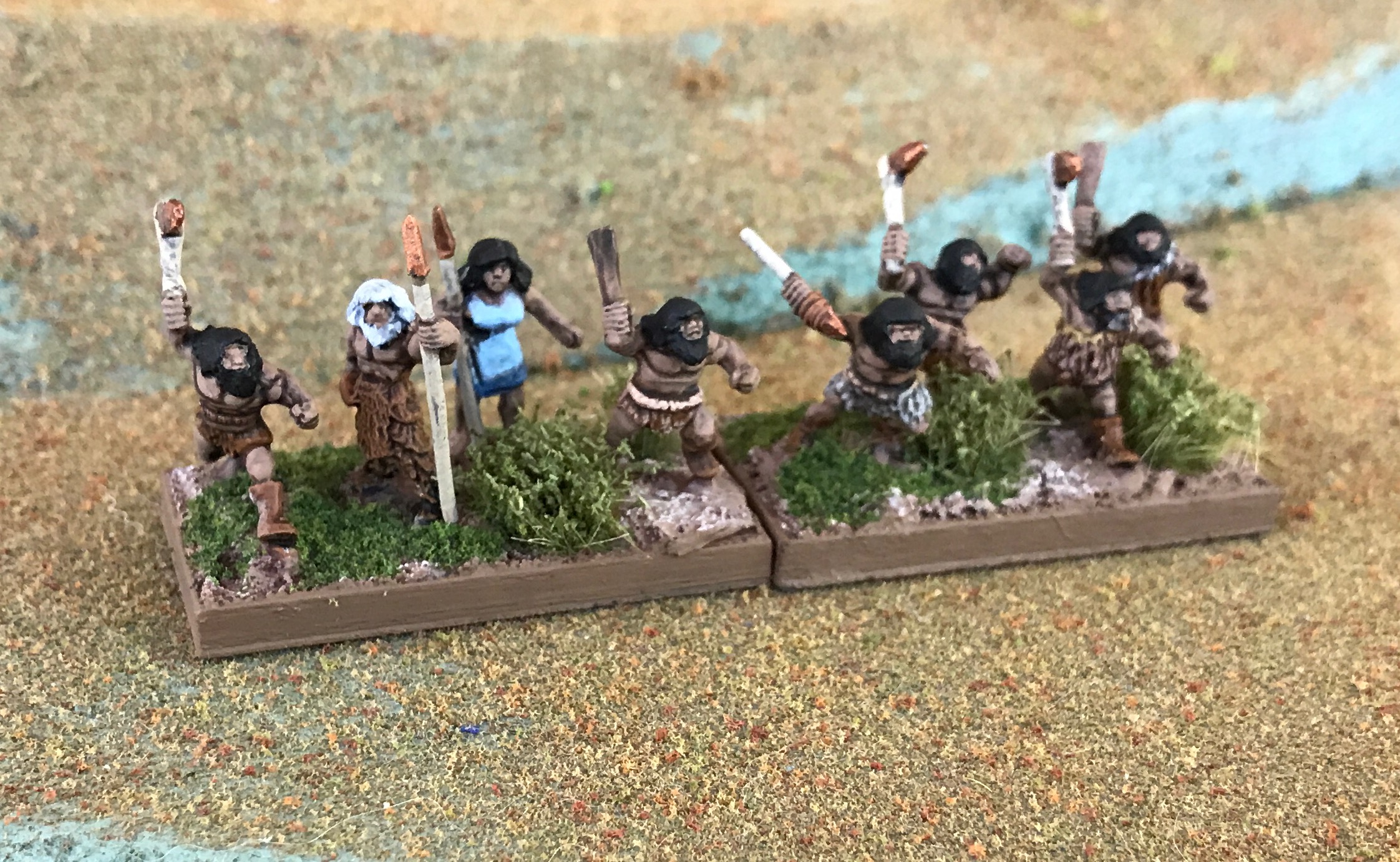 Quite a scene you've set, I can almost hear the lamentations of their women.

I do wonder sometimes if this is toy soldiers or your version of storyboarding for your next Hollywood production. Looking forward to the next episode of "The Saga of Sumer".
Top

I am afraid the next episode will be less exciting - an early Egyptian army with a plain camp. I am torn beteween using the Baueda brand shield camp with some tents or scratch-building a section of fortifications.

Wait, maybe I could make a huge camp showing the building of a pyramid with a few dozen workers built from green stuff and....no, must stop myself.
Top

Restraint is for the unimaginative.


Texus Maximus wrote: ↑
Wed Jul 24, 2019 2:23 pm
Wait, maybe I could make a huge camp showing the building of a pyramid with a few dozen workers built from green stuff and....no, must stop myself.

As I see you may have noticed Triumph places creatively onerous restrictions on the horizontal dimensions of ones camp but, vertically, the sky's the limit!

Oh, surely you can fit one of these in as some scatter terrain colour for your Zagros Highlanders? 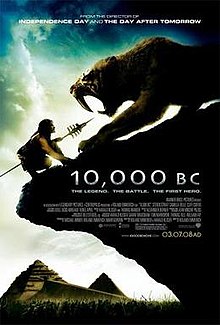 More progress on the camp.