This 15mm army will be made of Old Glory Persians that I painted a number of years ago and decided to bring up to standard.

The three Skirmisher stands will be given updated paint jobs and bases.

The Light Foot are getting brass rod spears to replace the straight pins and some better paint jobs on the clothing. There is an ilustration of Iranian infantry from the 6th century B.C. found in Armies of the Ancient Near East (WRG, 1984) which shows them wearing a long sleeved tunic, large rectangular shield made of reed and leather, and long socks and boots in the Assyrian style. These figures are wearing trousers and shoes but I think they are close enough, especially if I paint the trousers in Assyrian-looking patterns . The headress is a fairly close match also.

The six stands of Javelin Cavalry are getting the most work. One stand is being converted to look like the Mannaean mounted warrior in the WRG book: boots, kilt, a "mullet" type hairstyle, armor on the horses chest, and a beadwork strap around the neck with a bell at the end. The rest are geting brass javelins and in some cases an animal fur cape draped over the right side of the body. 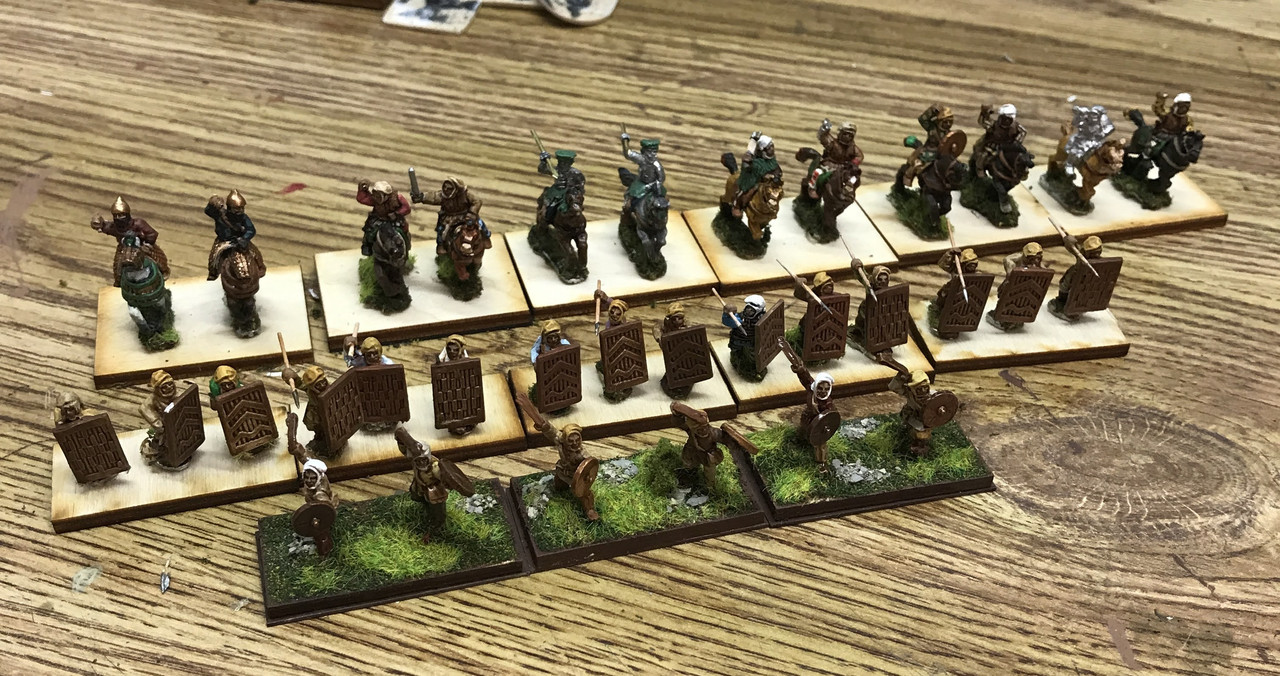 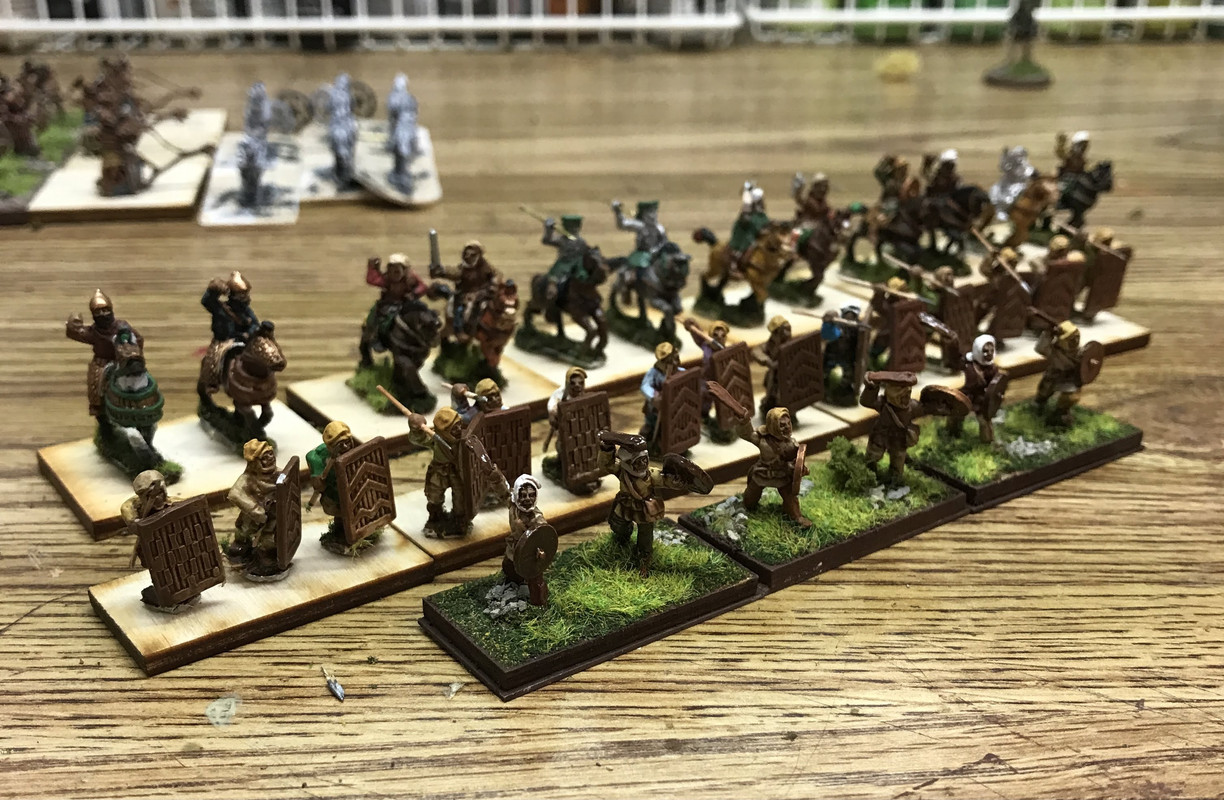 The Mannaeans were a people of Hurrian origin living in a settled kingdom in what is now Northwestern Iran. They endured war and occupation by both the Assyrians and Scythians, until finally being defeated by the Medes in about 600 B.C. They appear as part of an Allied Contingent on the list.

The appearance of these troops is based on this illustration from the WRG book "Armies of the Ancient Near East" by Stilman and Tallis, published in 1984: 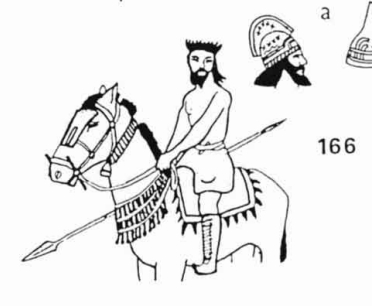 They are described as having horses with a beaded neck rope with a bell attcahed and front armor, inclusing a forehead piece. The cavalryman is barechested and has a distinct spiky hairstyle, a spear, a simple kilt, and boots. The figures seen here are converted Old Glory figures - I included the armor elements and the beaded bell rope too.

They are painted to look decent at arms length, which is about the best I can manage nowadays! 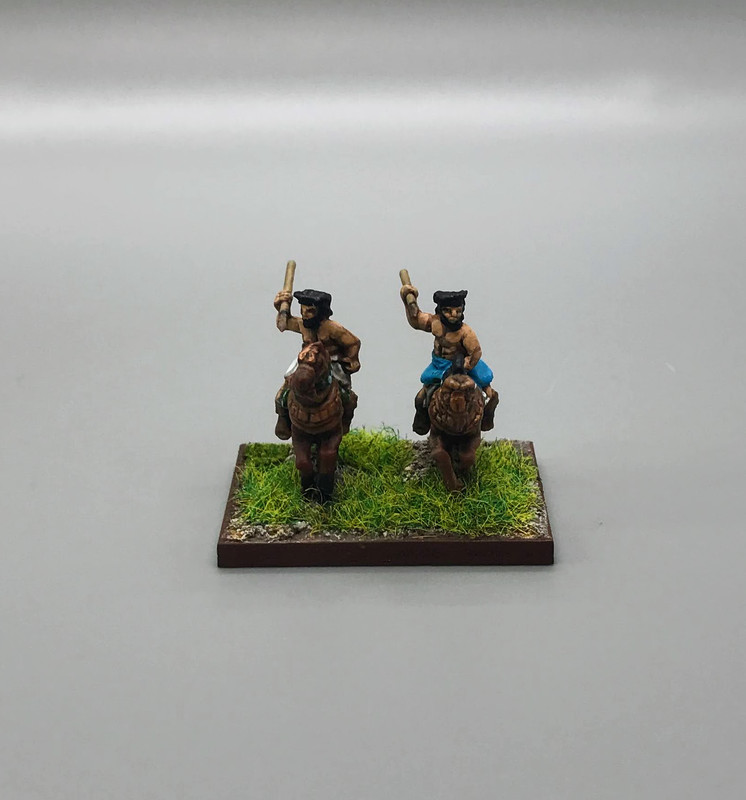 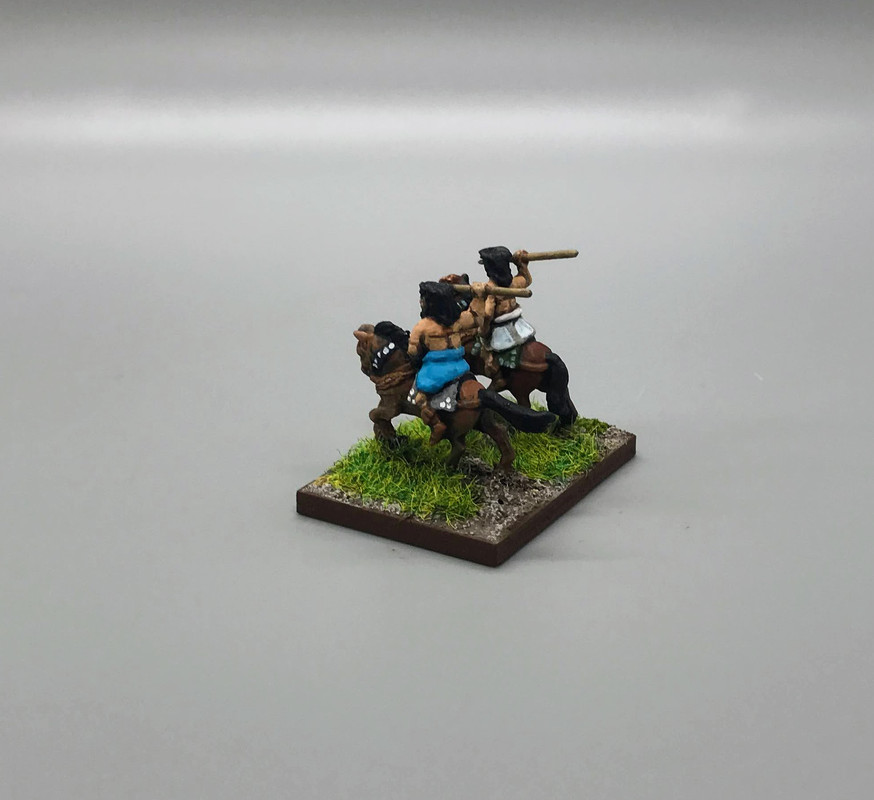 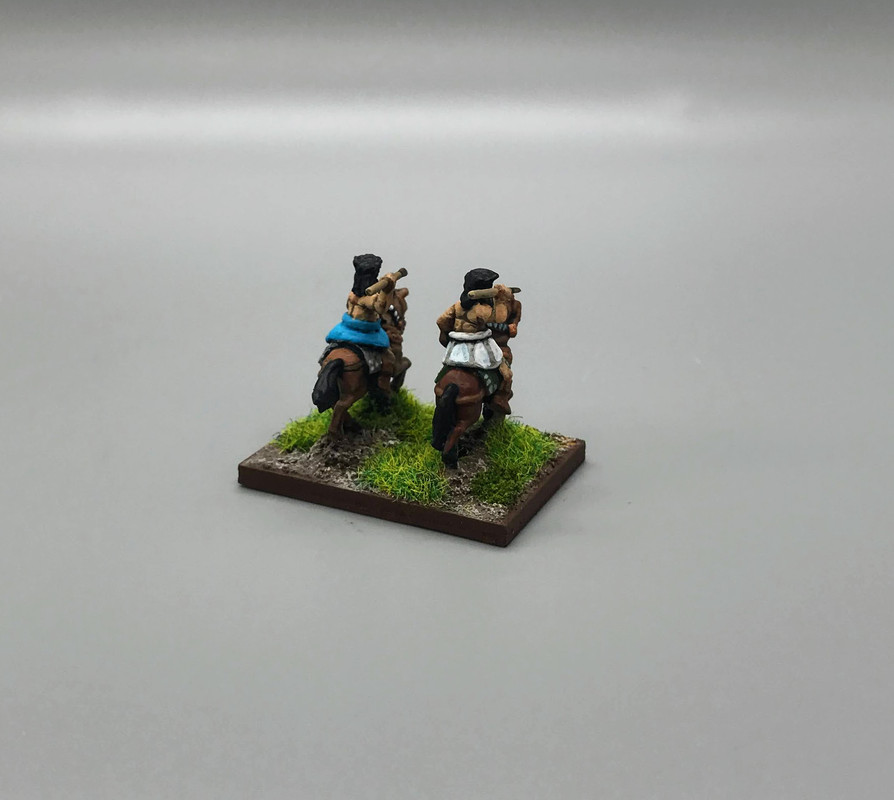 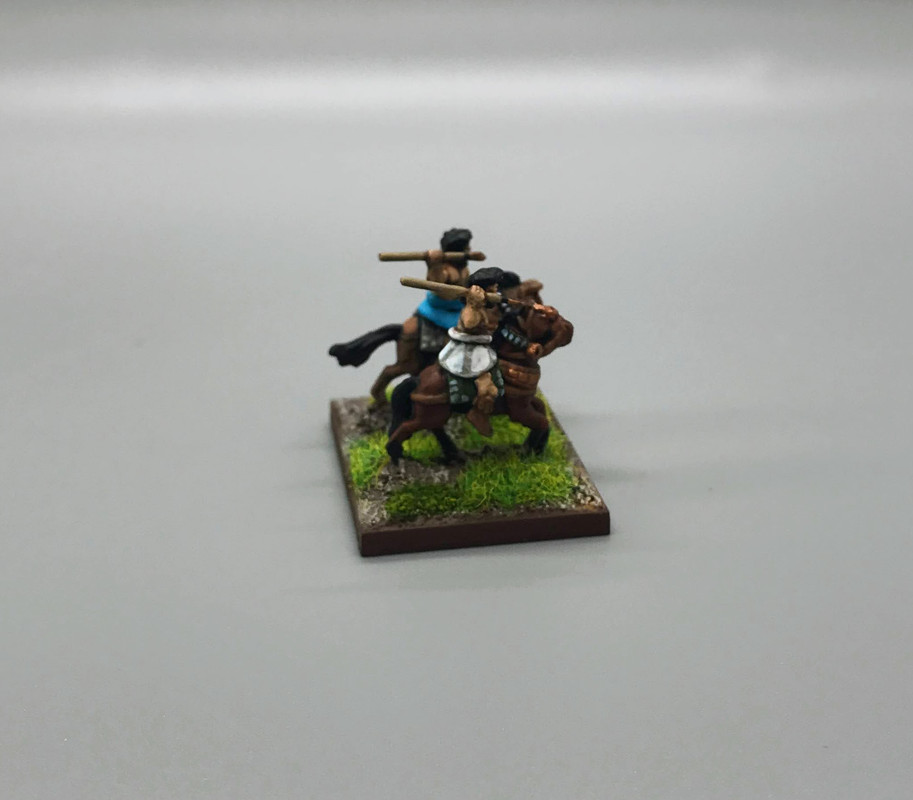 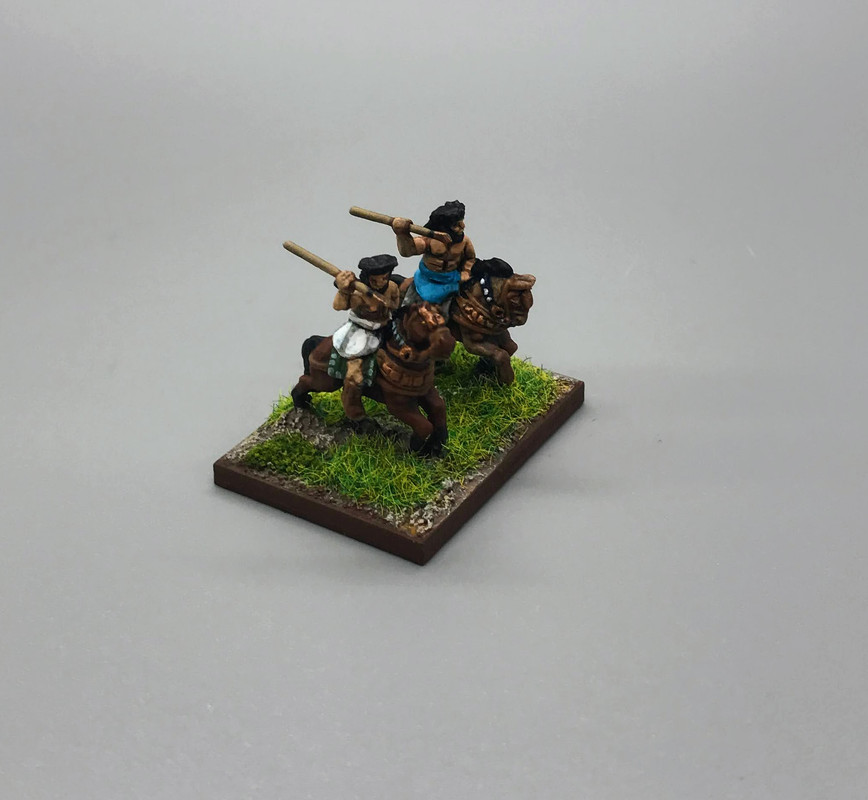 Half of the Javelin Cavalry are finished, including the general's stand. 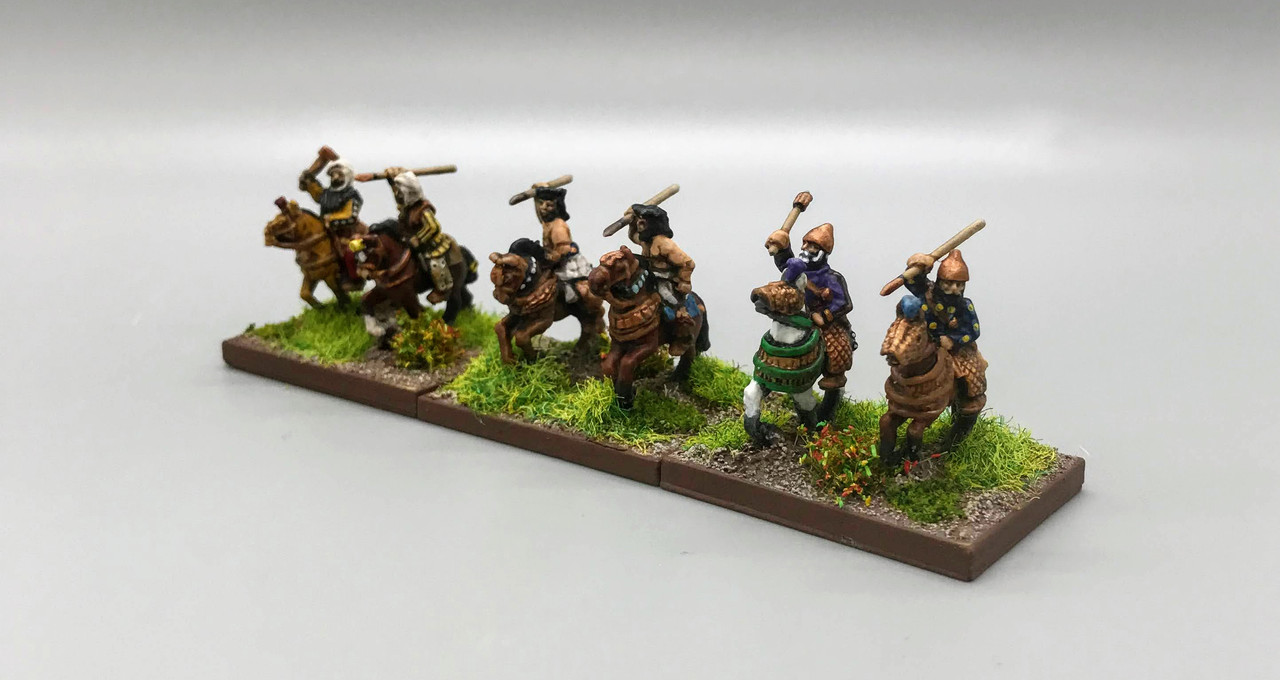 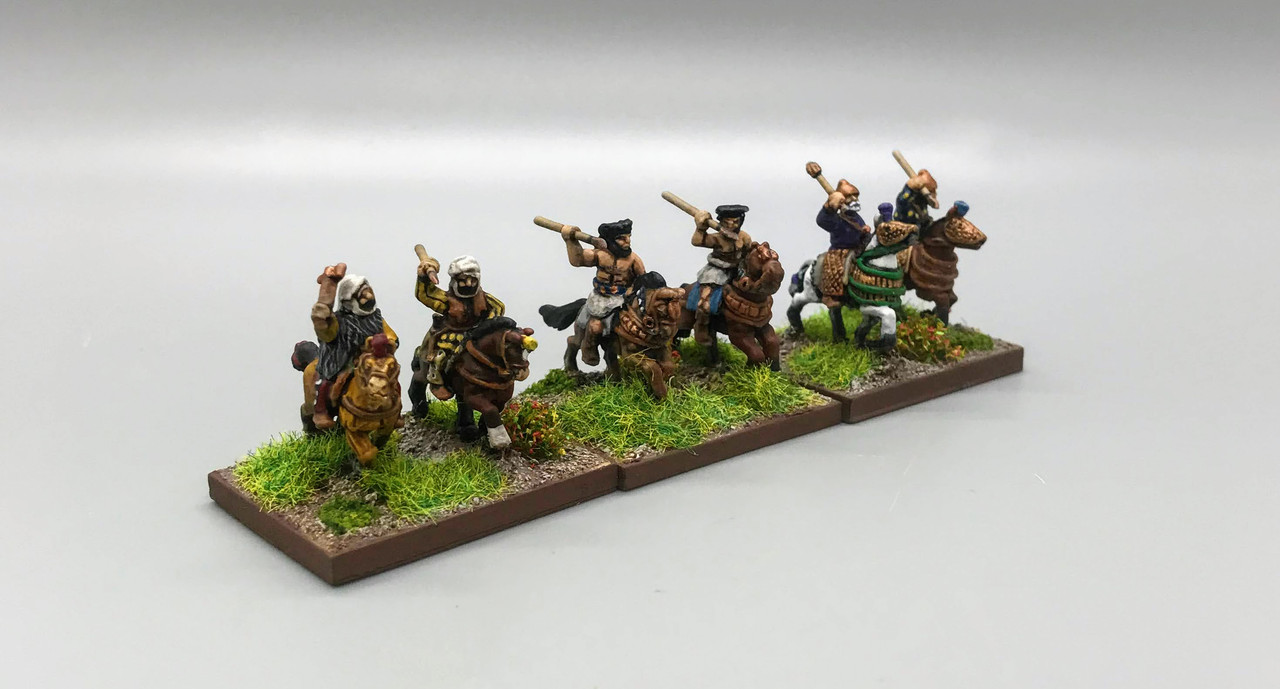 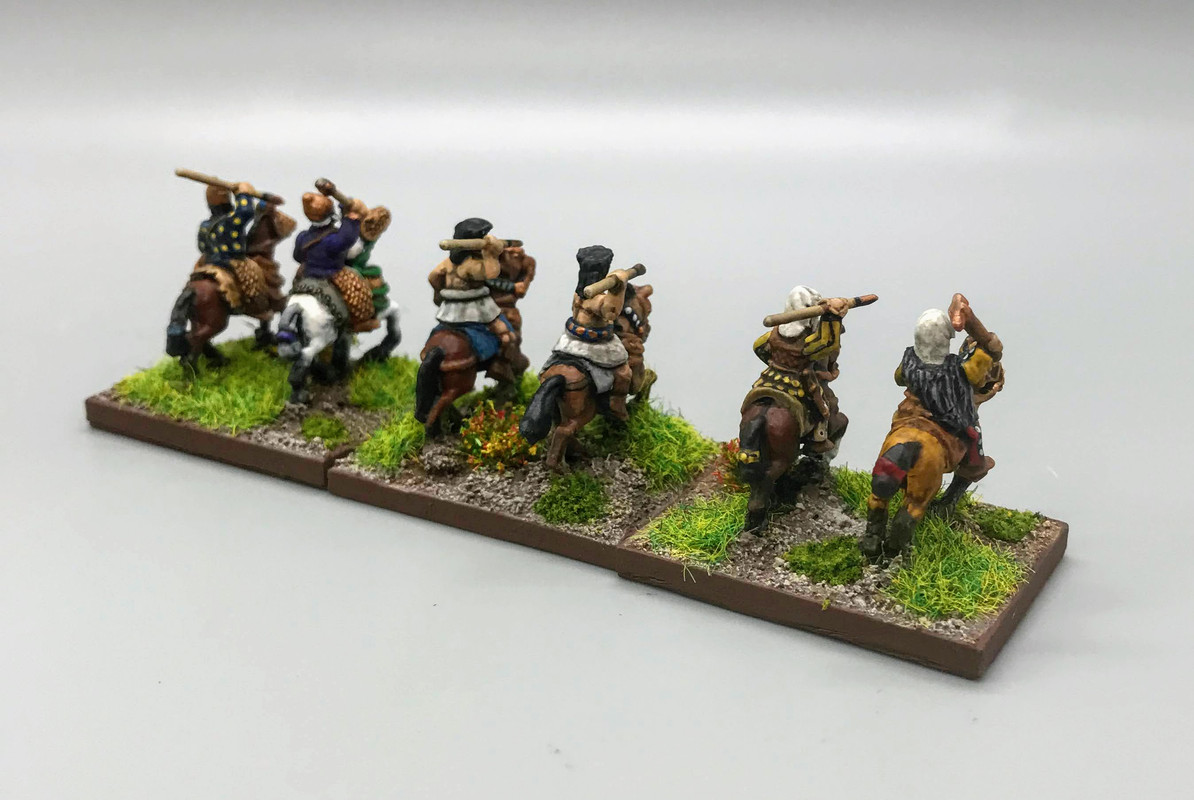 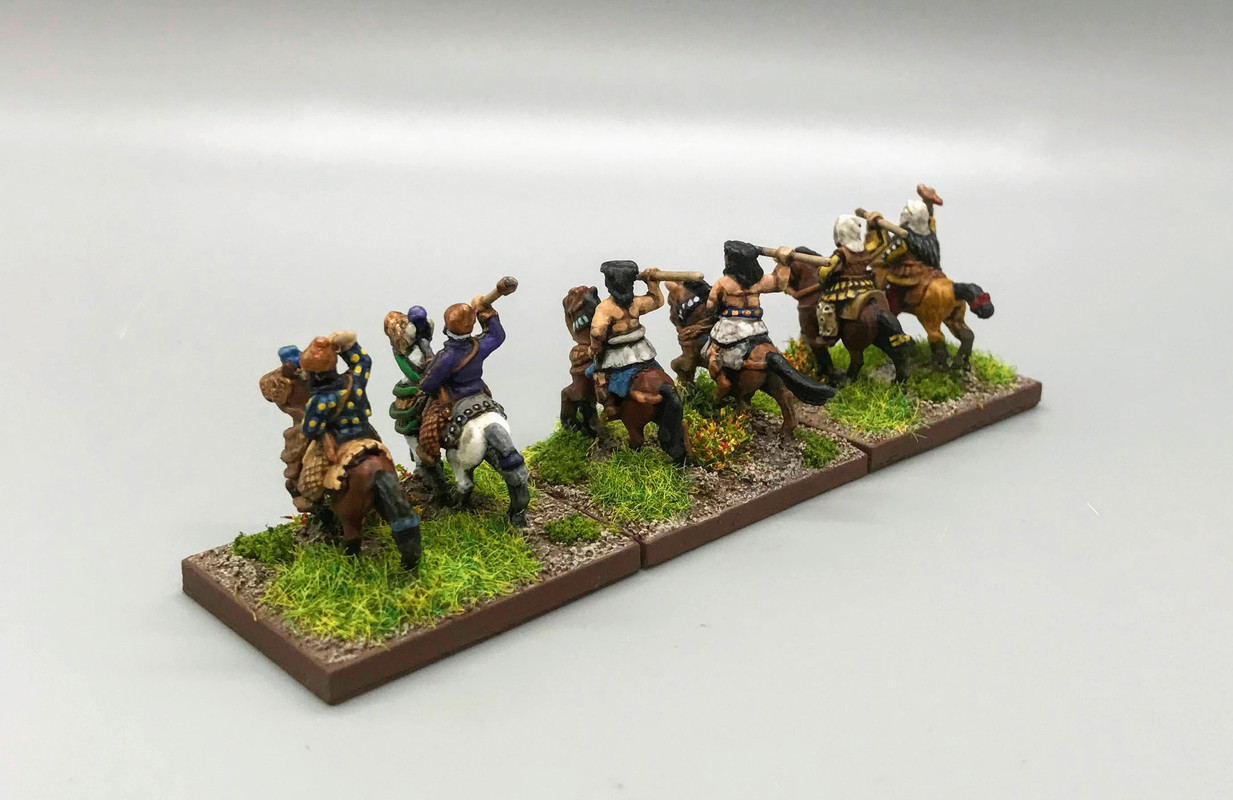 The army is complete. In Triumph! terms, it has: 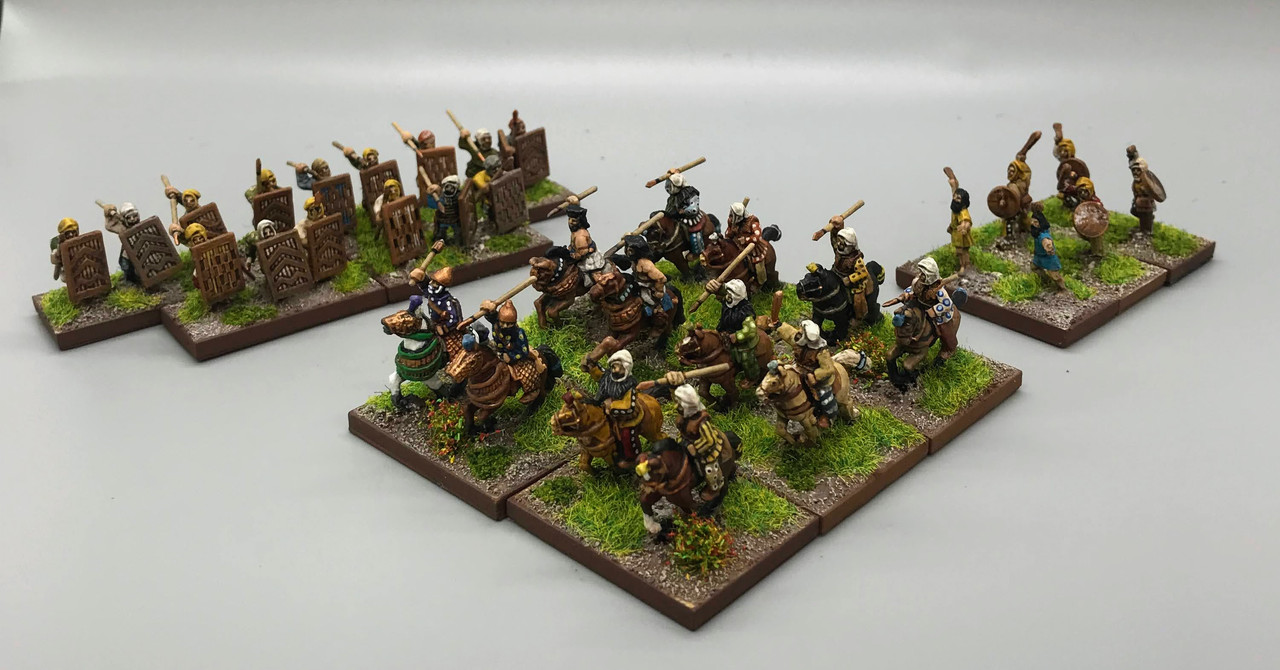 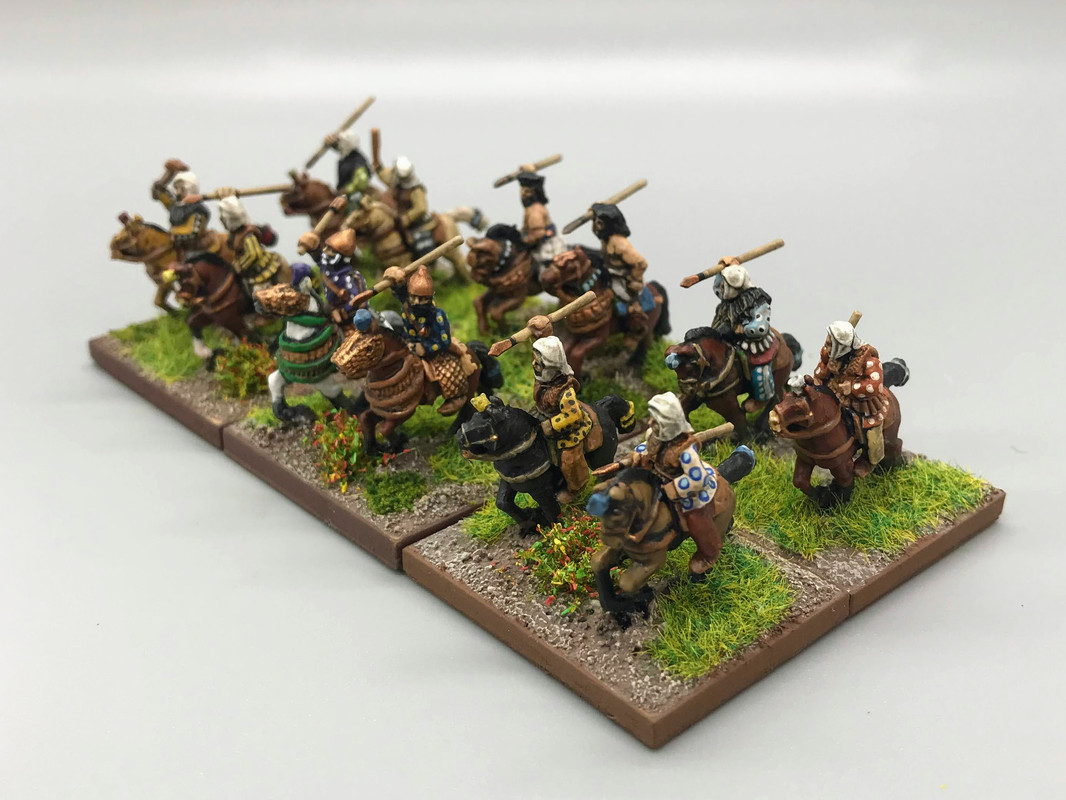 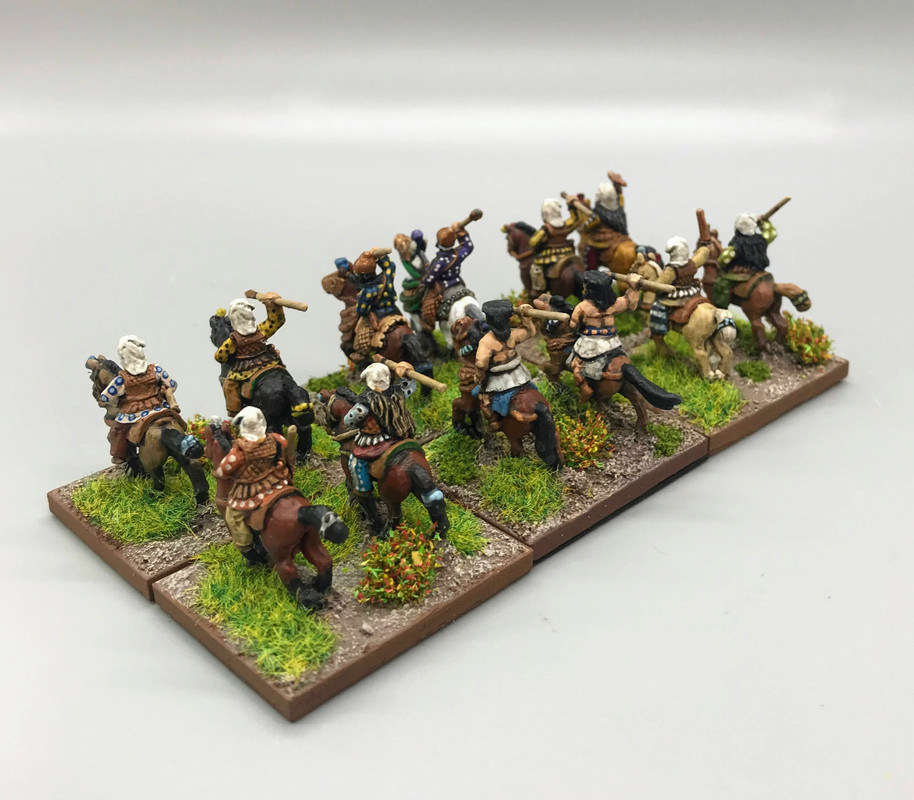 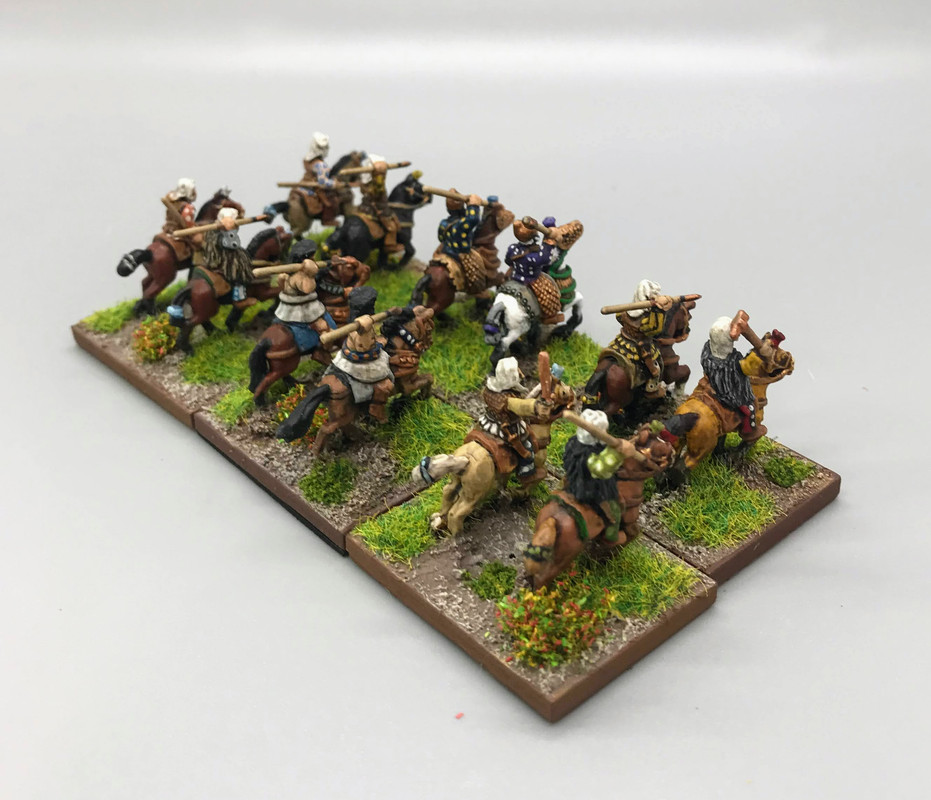 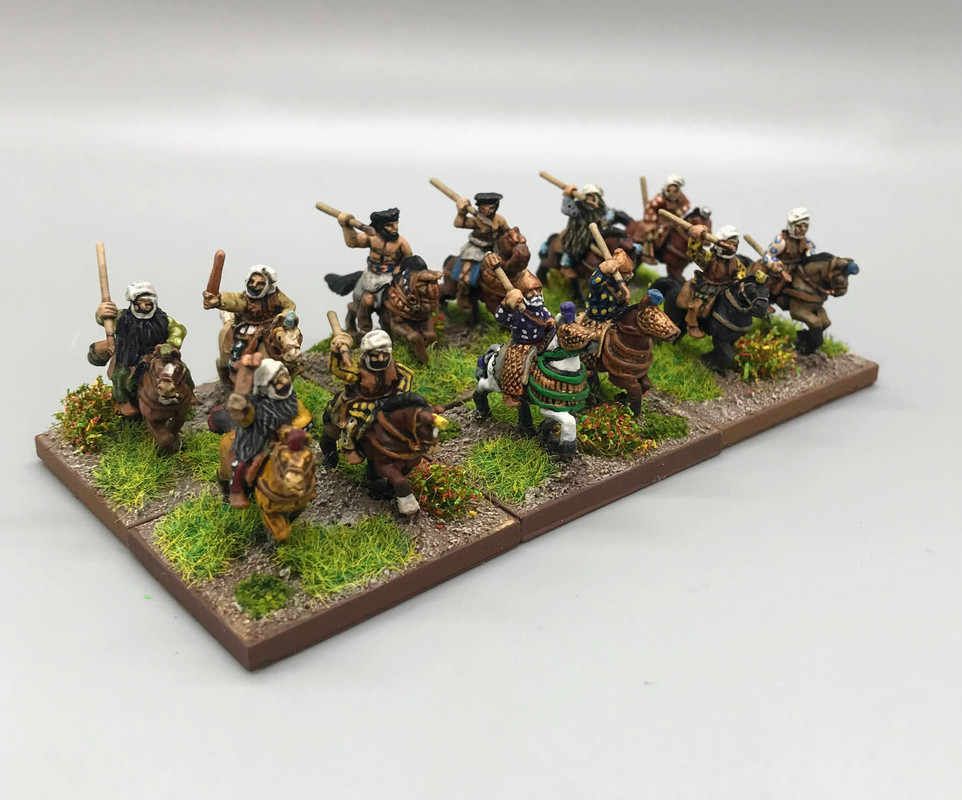 These figures have a few conversions, primarily on the stand of Mannean cavalry and replacing weapons. The General is a regular trooper figure with leg armor, but placed on a white horse with barding and given a mace sculpted from brass wire and Green Stuff.

I found out that Essex makes a nice Mannean cavalry figure, but only after I made my own! 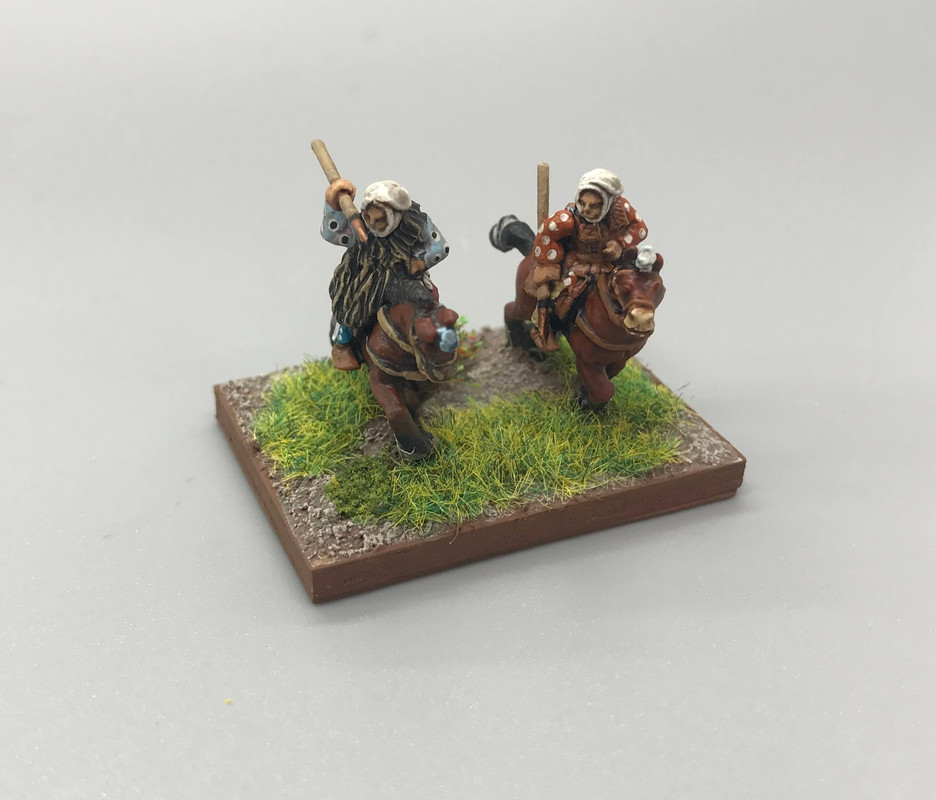 The two figures on this stand are actually the same sculpt. One was given a fur cape draped over the shoulder. The other was given a new right arm. If you are considering doing conversions, a fur cape is the easiest one to do. 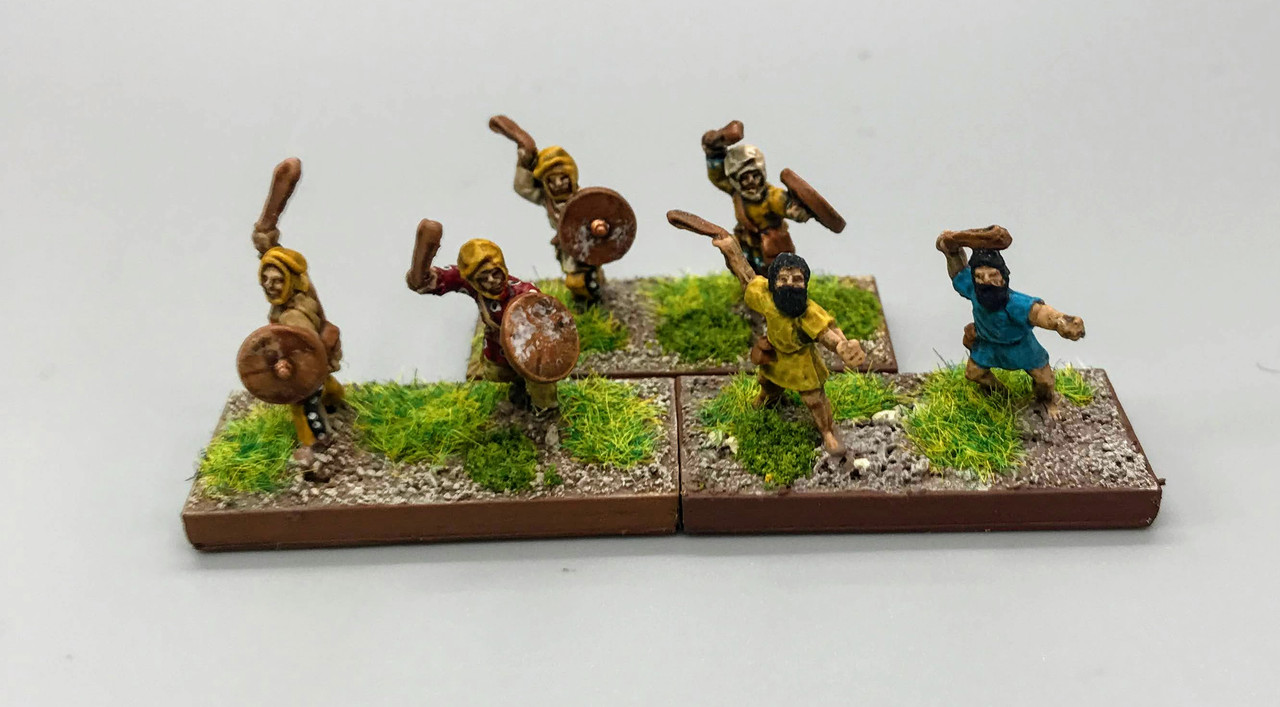 A stand of Babylonians was included with the Skirmishers, to mark the Babylonian-Mede alliance of about 620 B.C. that destroyed the Neo-Assyrian empire. 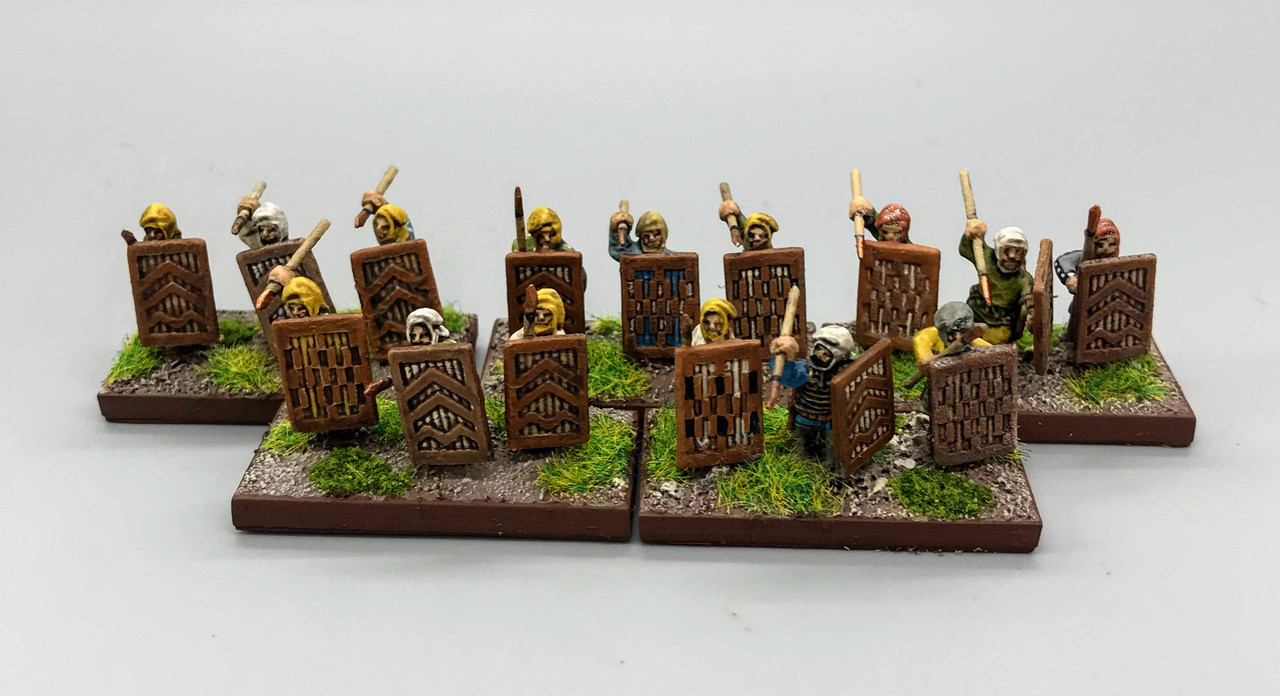 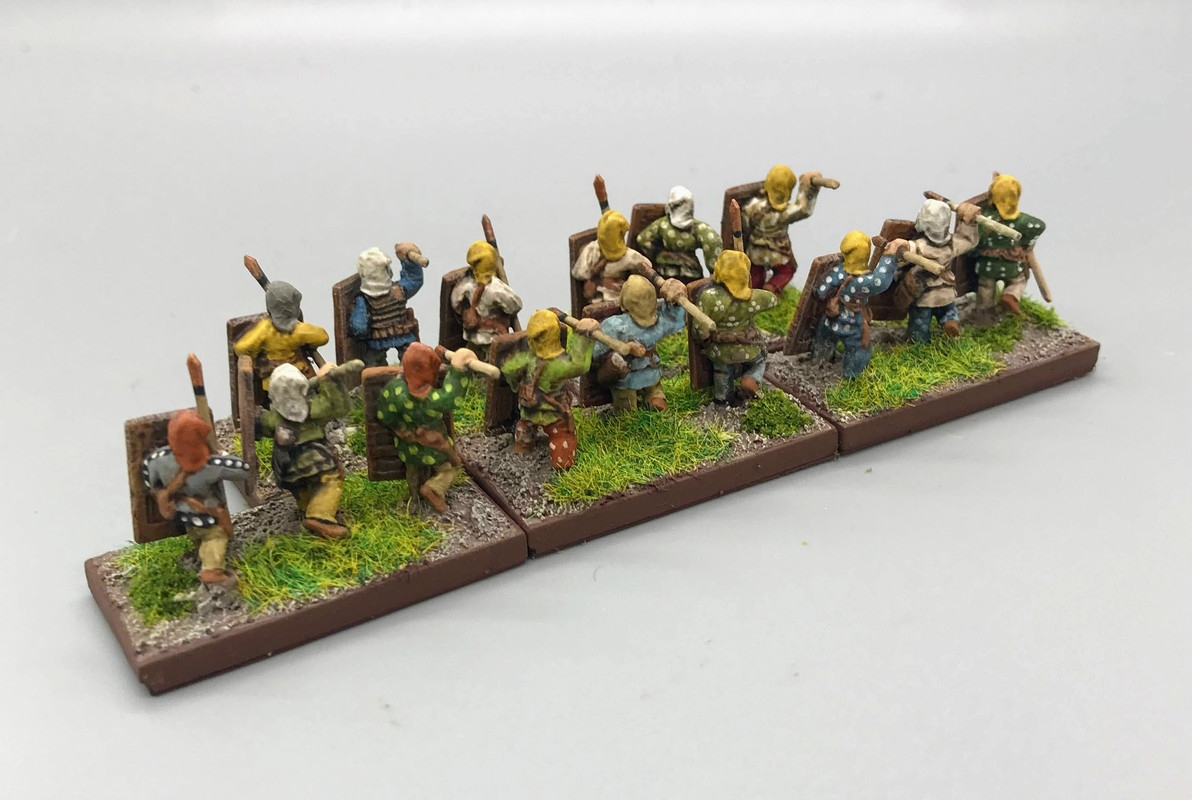 These converted Old Glory slingers and Kardakes were given Khurasan-brand shields to match the illustration of Iranian infantry of the period.

I am happy overall with how this army turned out and thought it was fun to re-use an older army.
Top