This 15mm army is for the Early Hebrew (1250 BC to 1000 BC) list.The early list represents the Hebrew army several hundred years after the Exodus from Egypt until the time of King David of the united Israelite kingdom of Israel and Judah. There are few contemporary depictions of Hebrews from this time period, so “their appearance has to be surmised with evidence gleaned from neighboring states.” (Stillman and Tallis, 150). 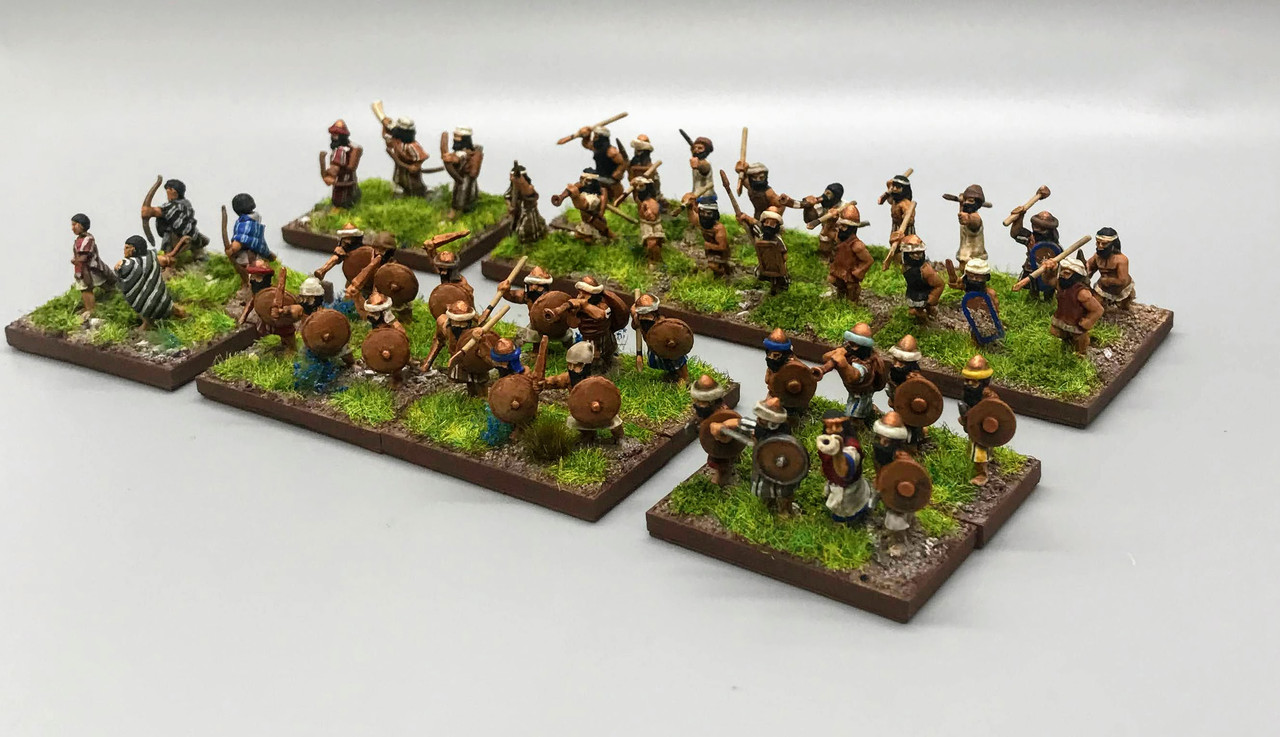 For a total of 15 elements and two Battle Cards worth a total of 48 points. 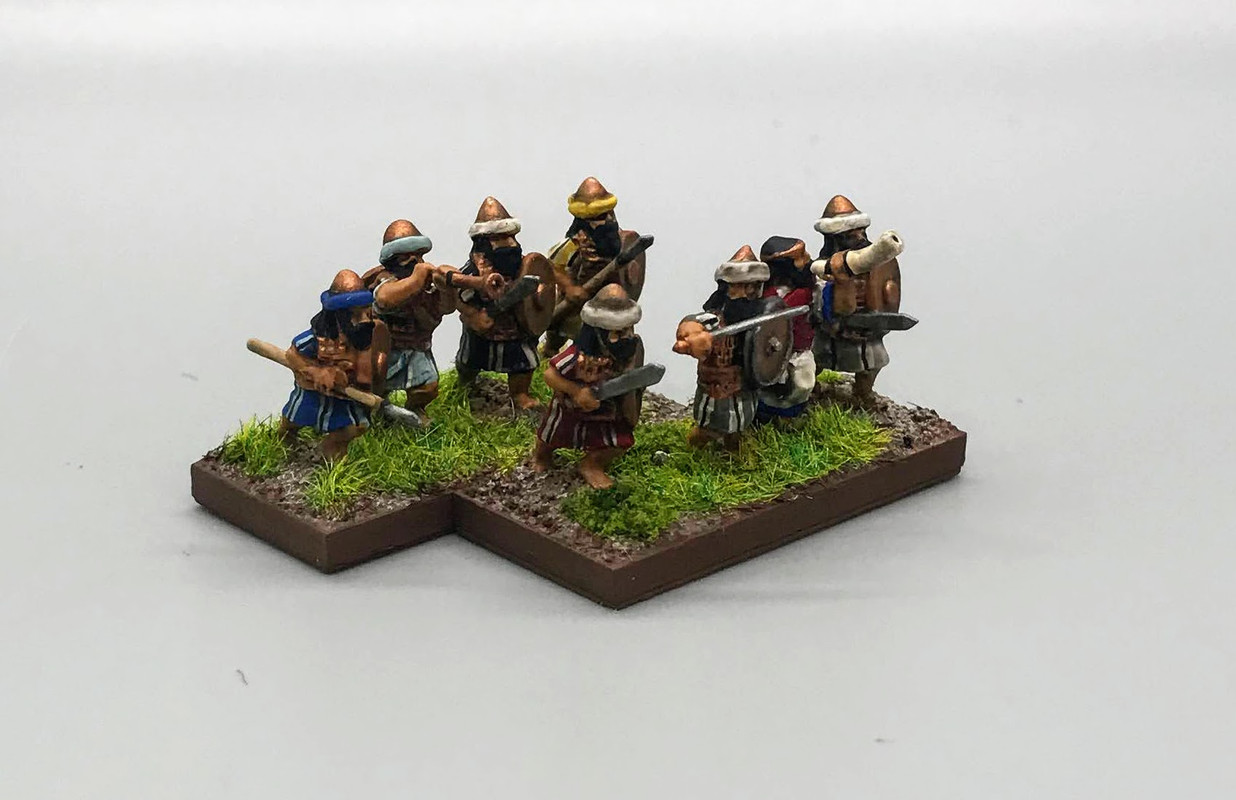 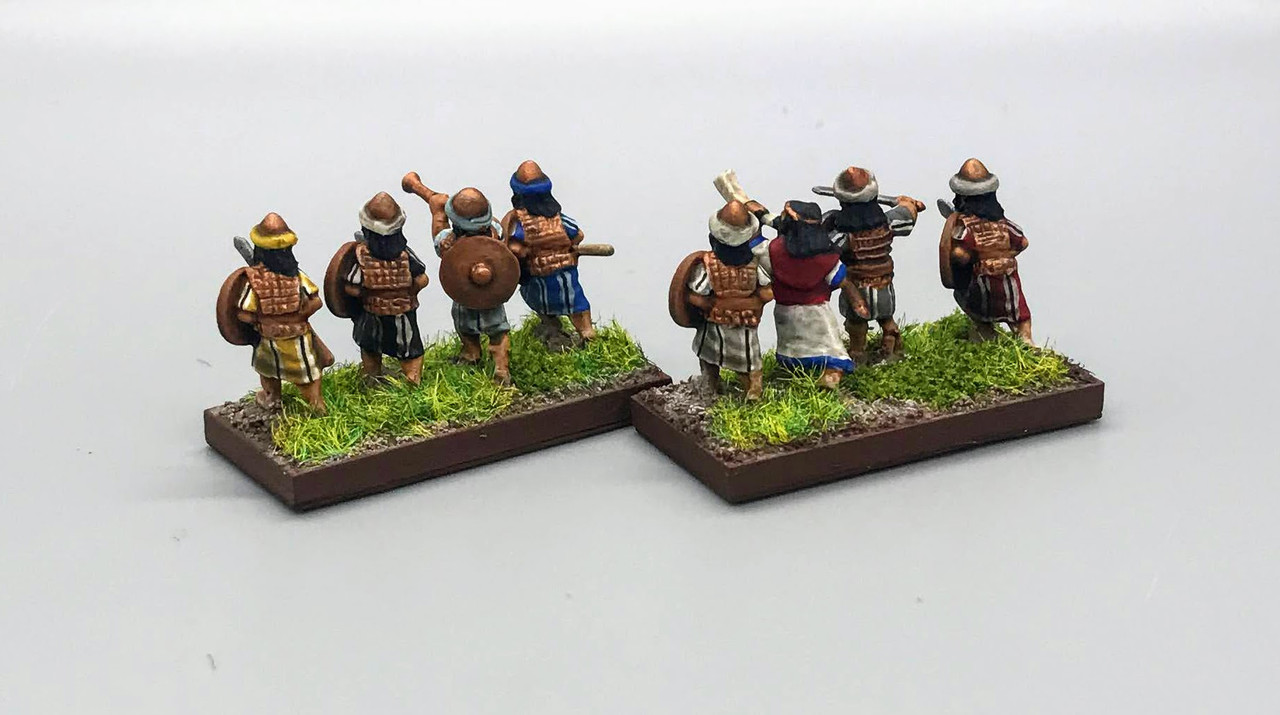 The “picked men” of Gideon (Judges 7: 4-8) are depicted here as better-equipped warriors. They are wearing simple domed helmets, the lower edges of which are wrapped in cloth with a flap hanging down over one ear. This is based on the illustration of a Hebrew Warrior (11th Century B.C.) from Armies of the Ancient Near East.

They are wearing short-sleeved tunics which reach down to the knees. This clothing style is seen on Hebrew prisoners in the Assyrian reliefs of Sennacherib depicting the siege of Lachish (701 B.C.) in the lowlands of Judea. (Watson, 45) The striped patterns are suggested by the clothing of the “Asiatic” nomads of Syria-Canaan seen in the Beni Hasan wall paintings (1890 B.C,) from Egypt.

The plain round medium-sized shield is taken from the Armies of the Ancient Near East. This book also mentions that David’s “Mighty Men” may have also worn a scale or lamellar corslet, similar to that worn by Mitanni charioteers. (Stillman and Tallis, 150).

The command stand has a priest blowing a curved horn and wearing a robe and kind of cloak draped over his shoulders similar to the Hebrew tribute bearers seen on Shalmeneser’s Black Obelisk from 825 B.C. I assumed that the more elaborate Temple garments would not be worn in the field. I could not find any information on standard bearers, so I opted to omit them entirely. 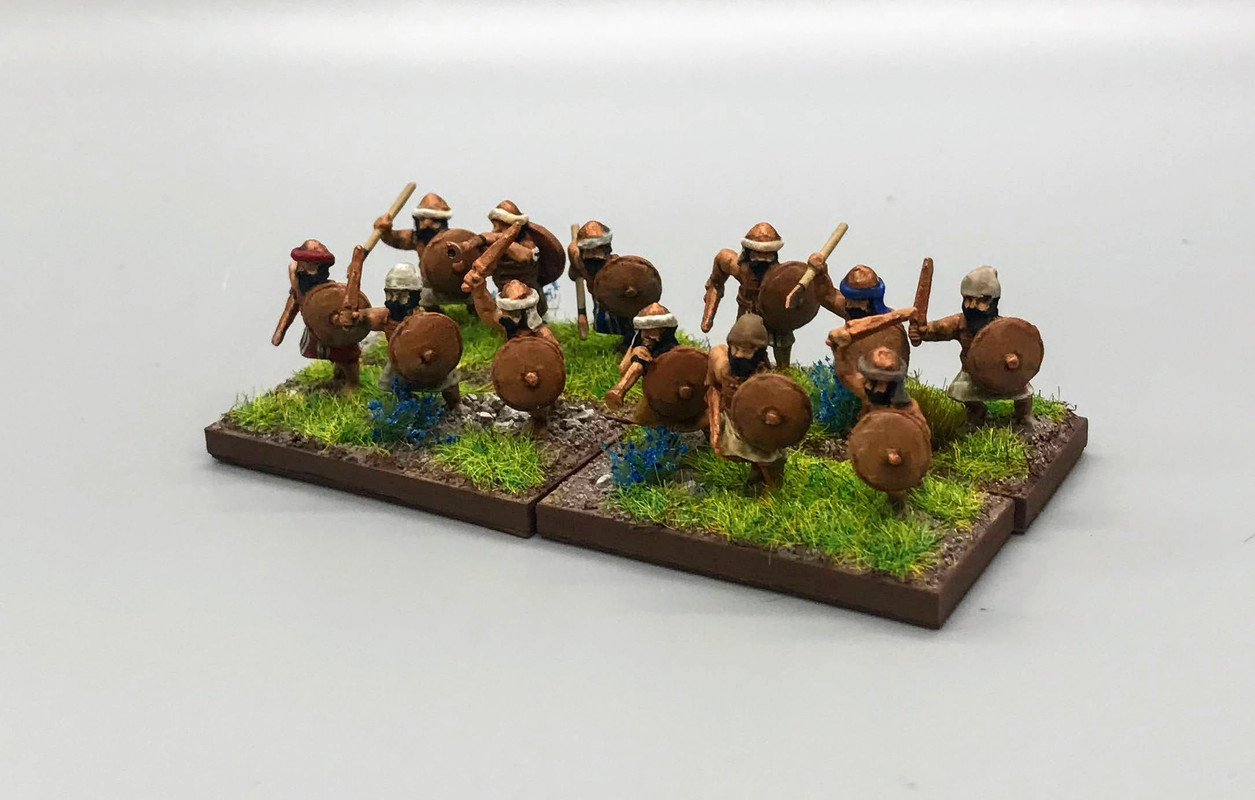 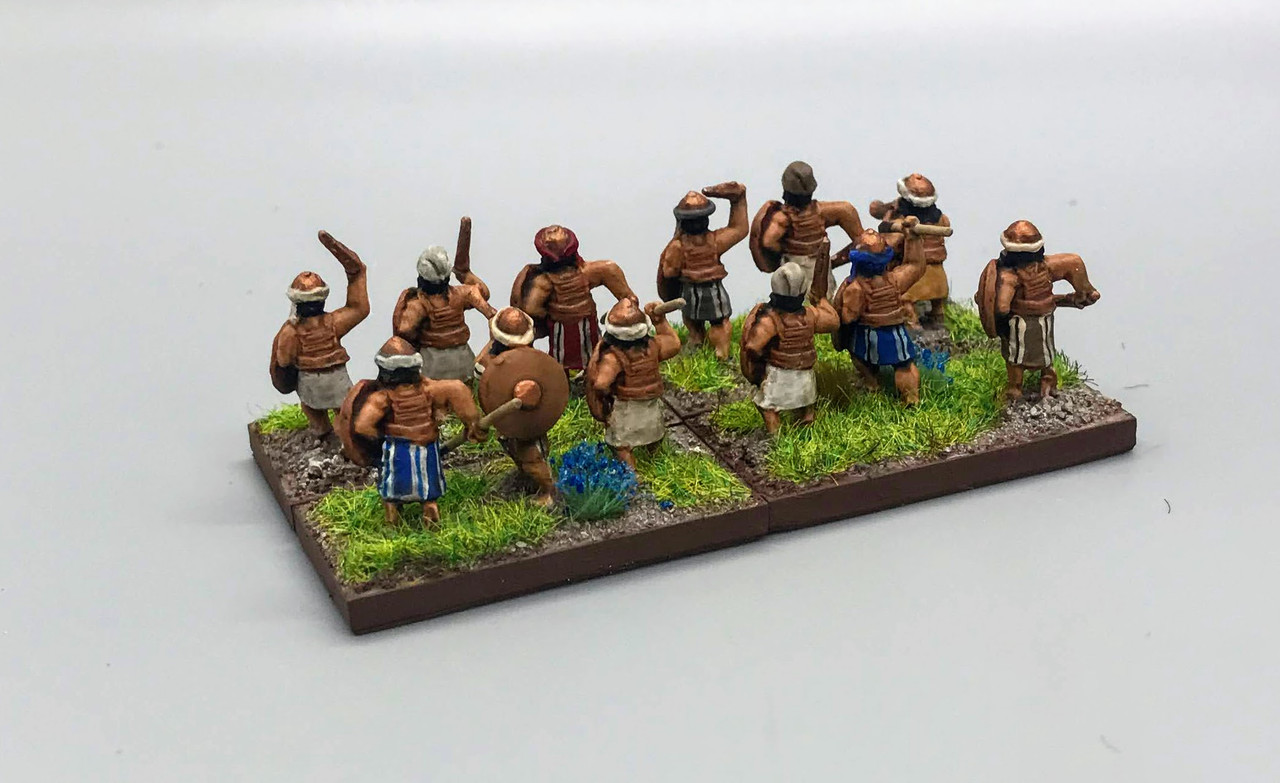 These fierce fighters wear a mix of headgear. The helmets are similar to those of the picked men. Others wear a kind of peaked cap, with the top of the cap flopped down towards the rear. (Watson, 45) They are wearing leather bands of armor across the abdomen, similar to the type of armor seen worn by some Canaanite and Syrian troops of the 15th to 13th centuries B.C. (Stillman and Tallis, 144). The shields are similar to those of the packed men. Each one carries a sword like those of the Sea Peoples (Stillman and Tallis, 149).

These troops have blue flowers on the base to help distinguish them from the Light Foot.

The Bible mentions archers in battle in several places, in particular “The Reubenites, the Gadites and the half-tribe of Manasseh….able-bodied men who could handle shield and sword, who could use a bow, and who were trained for battle” (1 Chronicles 5:18).

The Bible also mentions “... there were seven hundred select troops who were left-handed, each of whom could sling a stone at a hair and not miss” (Judges 20:16). These slinger figures, being youths, are rebelling against tradition and using their slings right-handed.

There is also some pictorial evidence to be found on the Lachish relief, which shows at least one Hebrew archer and a figure throwing a stone. 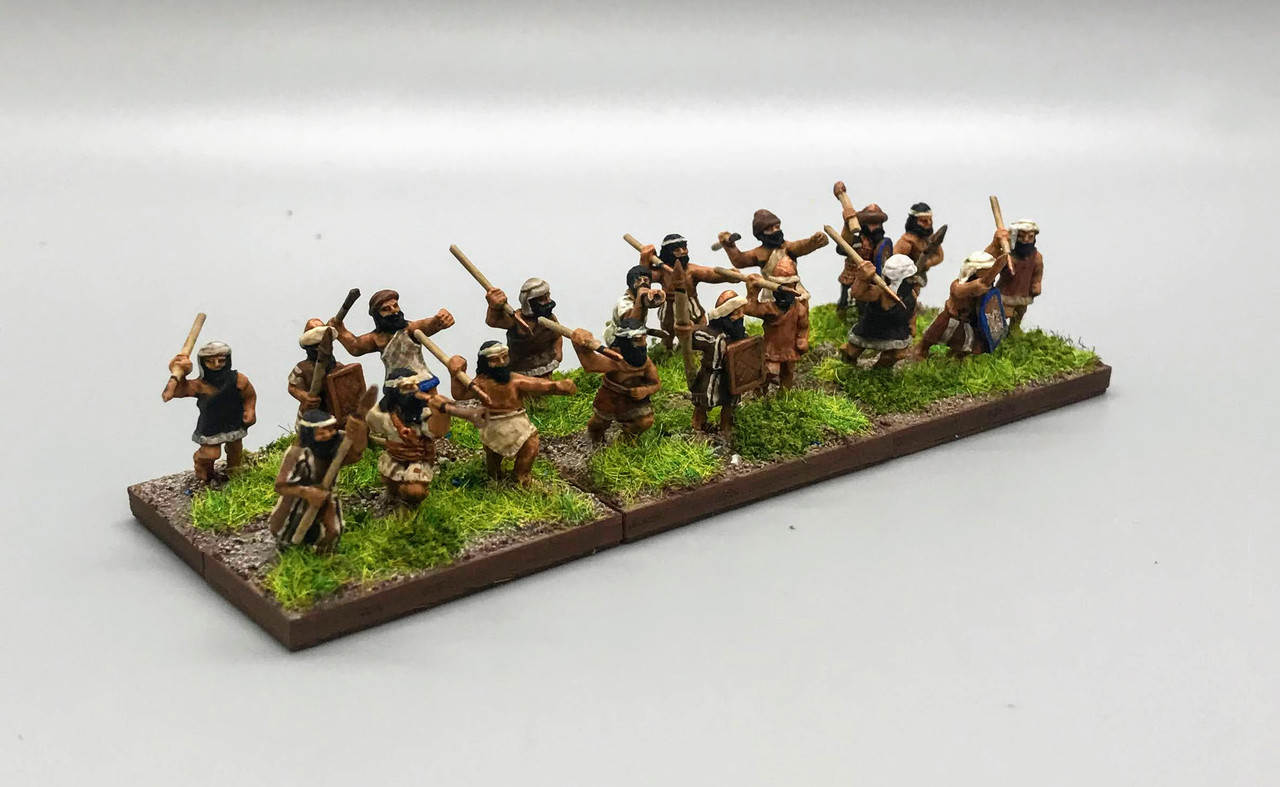 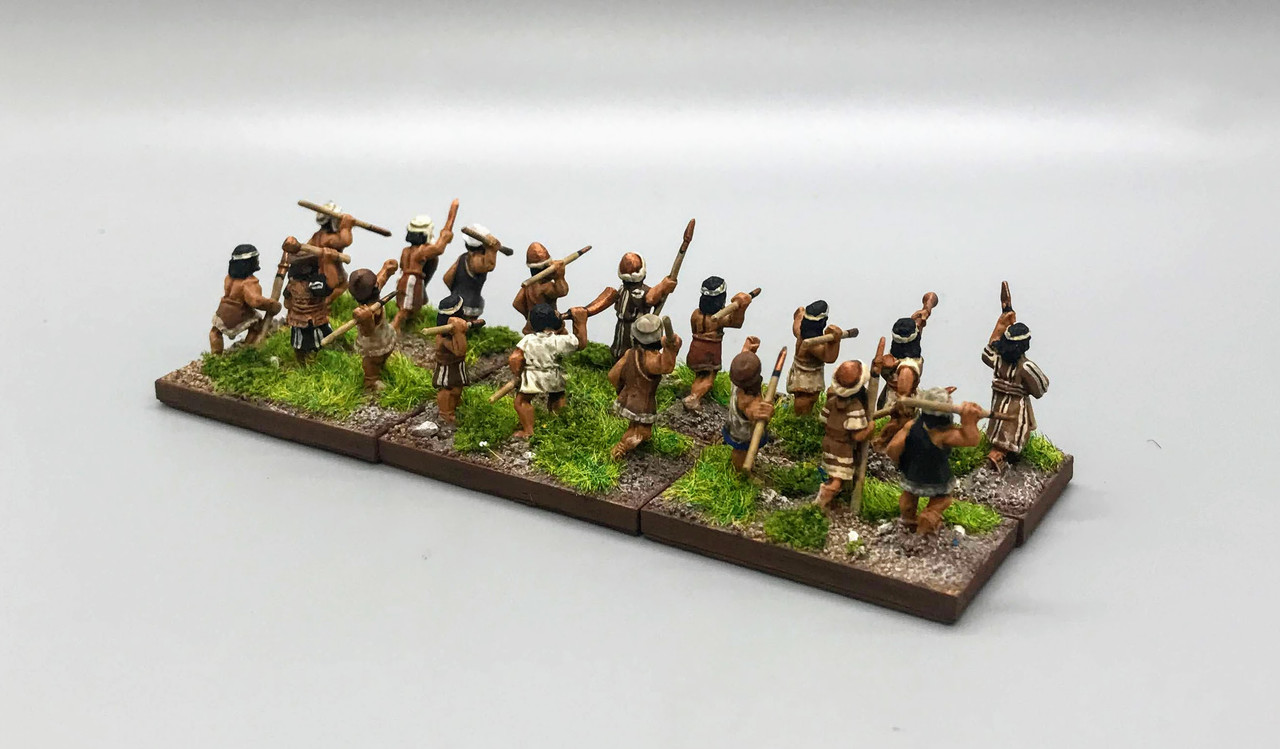 These lightly armed troops are using a mix of equipment and wearing a wider variety of clothing reflective of Egypt, Canaan, and Syria. Some have Egyptian shields and armor, from either having served in the Egyptian military (Gabriel, 68) or being taken in battle and put to use. Others have plain wicker shields.

All figures are by Old Glory except for the Skirmishers.

The Warband are almost all Sherden figures, marketed by Old Glory as “Egyptian Guardsmen”. One, a trumpet-blower, as a converted Hittite command figure.

The bowmen are converted Kharu archers and another Syrian City States command figure. The skirmishers are unmodified Donnington Maccabeans.

The Light Foot are a mix of Amorite, Canaanite, and other Old Glory figures.