I'm working to Triumph-ize and fill out my Later Achaemenid Persians, and I had a few troop types I'm not sure best how to represent, so thought I'd come here and seek others' input.

Colonist horsemen (Bad Horse): Anything visually distinctive about these guys? Or will they just be slightly larger clumps of Persian horsemen, maybe a little shabbier than others?

Egyptian infantry (Heavy Foot): While still fighting under the Persians, before being hellenised by Alexander and then the Ptolemids, how would these appear? would they still look like the soldiers of the New Kingdom, centuries or a millennium earlier? Or would they have picked up new garb from their commerce with Greece and Phoenicia?

Chalybes (Light Spear): All I can find on these chaps easily is that the Greeks said they were residents of the northern coast of Asia Minor (except for one Greek author who just equated them with Scythians), and that Xenophon said they wore linen corslets, were well armed, and were ferocious. Any ideas as to how to represent them in miniature?
Top

I don't think we actually know anything about what the colonist cavalry looked like, but they were of various ethnicities, so you may want to depict them accordingly (Duncan Head mentions Jewish, Arab, Syrian, and Indian units settled in Babylonia). Alternatively, they may have adopted Persian styles (Indian tailors and blacksmiths may have been in short supply in Babylonia), though probably less gaudy than more prestigious units (duller colours, less metal armour, say).

Wargamer received wisdom, based on hints in Herodotus and Xenophon, would have Egyptian infantry in Persian service with long spear, reticulated helmet, loincloth, and a semicylindrical shield rounded at the top but straight at the bottom. More or less like this Essex figure, though he's got the wrong sort of helmet.

For my 28mm army I used the Vendel Egyptians in this video:

These were horde there is also an Egyptian marine which is the more heavily armed which works great for the heavy foot option:


For the bad horse you could use just about any mix of dress from the region, just keep them unarmored or lightly armored and without many shields. Bad horse is likely to represent hastily formed mounted units. Could be heavy infantry mounted on horseback mixed with farmers on plow horses.
Top

There is mention of "Cabelees" in Armies of the Macedonian and Punic Wars (WRG, 1975) by Richard Nelson. They are said to "look like Cilicians" and depicted like this: 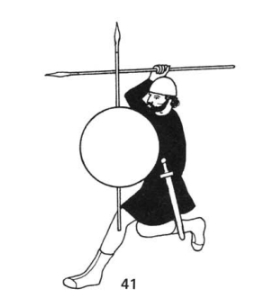 Minifigs 15mm makes a figure for this.
Top

Minifigs 15mm makes a figure for this.

You are correct! Greek and Persian Wars is the book.
Top
Post Reply
7 posts • Page 1 of 1