I was of the impression (based on e.g., Duncan's AMPW) that prior to adopting Standard Sarmatian™ lancer tactics, the Rhoxolani were more-or-less standard steppe horse archers, so I was surprised to note the Meshwesh list has them as mostly Jav Cav. What's the basis for this?
Top

Andreas Johansson wrote: ↑
Sat Sep 21, 2019 5:17 pm
I was of the impression (based on e.g., Duncan's AMPW) that prior to adopting Standard Sarmatian™ lancer tactics, the Rhoxolani were more-or-less standard steppe horse archers, so I was surprised to note the Meshwesh list has them as mostly Jav Cav. What's the basis for this? 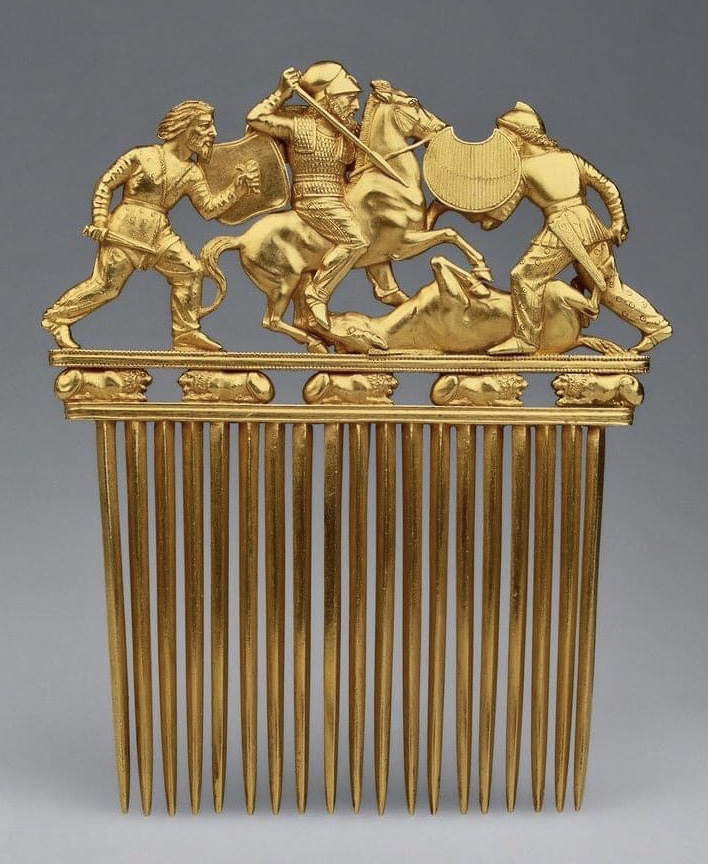 The Solokha comb shows a rider who is equipped as a JavCav; Duncan (in AMPW) doesn't give a definitive statement about Rhoxolani equipment. On the one hand he says something about grave finds indicating light horse archer dominance; on the other he mentions a variety of literary references that support spear use as much or more than bows. Until better archaeological results come in, we basically decided to use the Rhox/Early Sarmatian to represent Sarmatians before the adoption of the long lance in two hands, equipped as the Solokha comb shows. If you prefer the interpretation of massive horse archers, just run a Skythian army (representing a wide variety of Saka/Skythian related tribes) and call yours "Rhoxolani" under your breath -- since the Skyths and Rhoxis have almost identical geographical and chronological ranges, you lose nothing that way.

With all that said, my inclination upon re-reading the material in AMPW is to allow the representation of mixed forces (a Rhoxi/Early Sarm army that also has a bunch of Horsebow). Right now (as it is currently) it is possible to run a mostly-horsebow EarlySarm list (by calling them Saka, as I mention above) or a mostly-JavCav EarlySarm list (as the Rhoxi/Early Sarm list is now), but not a mixed list (as is a third reasonable interpretation of the sources). And maybe we ought to allow that possibility as well. With the troop type buckets we have there is nothing that represents a stand of mixed horsebow/javelin cavalry troops -- they are specialized as one or the other. So I'll discuss (with the others) the possibility of changing the current "0-1" Horsebow with "0-4" or "0-6" instead.
DK
Top

Is there, incidentally, any reason to associate the Solokha tomb with the Rhoxolani specifically? I note WP identifies it as "Scythian".
Top

Andreas Johansson wrote: ↑
Tue Sep 24, 2019 5:43 am
Is there, incidentally, any reason to associate the Solokha tomb with the Rhoxolani specifically? I note WP identifies it as "Scythian".

To an historian, the association might be considered a little speculative. Scythian is correct; Sarmatian (a subset of Scythian -- a confederation of Scythian tribes whose first association with that term was about 50 years later than the Solokha tomb) might be a little too specific and slightly premature.

That's the difference between wargamer naming and archaeologist naming. The Rhoxi are associated with that particular fighting style later (Strabo? Not sure). When did the Rhoxi adopt it? Did they adopt it first, or were they just a poster-child for the practice at the time of <Strabo or whoever>? Certainly there were some Sarmatians who fought that way, and some who did not. It is convenient to use Rhoxi/Early Sarm as the name for those who were fighting in the way of the Solokha comb carving, but an historian would see that as overstating the evidence -- we know people fighting that way existed, and we know the Rhoxolani and other parts of the Sarmatian federation fought that way later and dominated that region within a few hundred years, but we have no reason to assume a connection. But for wargamers, that's more connection than we usually get with military history of tribes that were a thousand miles and several cultures away from written records, and we need a name for the forces who fought that way, and Rhoxi/Early Sarm is clearly the best label for those dudes and dudettes. See WP here for some maps: https://en.wikipedia.org/wiki/Sarmatians; if you look up the Solokha tomb on WP you can find a map reference and see that it is smack dab in the middle of the region the Early Sarmatians came to dominate, and very close to the right time frame (?450 BC for the Solokha tomb; ?400-300 BC the G-R historians became aware of the existence of the Sarmatians above the Bosporan kingdom).

As I'm sure you're aware, this naming conflict comes up all the time. About fifteen years ago there were a few gamers who made a big fuss about how someone used the word "pike" to refer to weapons held by troops under Hannibal, and used that as an argument for the use of Alexandrian-style pike phalanx by Carthage. Most modern historians use pike, lance, spear as relatively synonymous English terms when translating the original Greek or Latin; most modern gamers use pike, lance, and spear as very specific technical terms to describe totally different weapons. It was a tempest in a teacup, of course, complicated by the fact that the original Greek/Latin authors were often using technical terms whose use-pattern was completely different from the English terms into which they were translated.
DK
Top
Post Reply
5 posts • Page 1 of 1